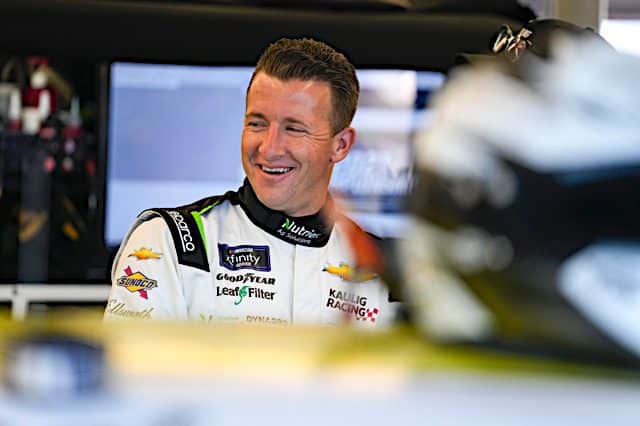 FORT WORTH, Texas — As the NASCAR Xfinity Series opened its playoffs at Texas Motor Speedway, all 12 of the drivers racing for the championship headed into Saturday’s (Sept. 24) Andy’s Frozen Custard 300 with the same goal: win the race, of course.

After all, the next two races in the Round of 12 are at Talladega Superspeedway and the Charlotte Motor Speedway ROVAL, both tracks that present unique challenges and a sense of uncertainty going forward. While it wasn’t a win, AJ Allmendinger walked away with a solid fourth-place finish.

But what’s so special about a fourth-place finish? Allmendinger won the regular season championship and has three victories to his name this season.

The answer to that question is simple. There was a point where it wasn’t completely clear whether the driver of the No. 16 Chevrolet would even see the checkered flag. Allmendinger was caught up in a crash that collected eight drivers just 20 laps after he won stage two.

“Just frustrated a little in myself,” Allmendinger explained after the race. “I knew I should have taken the bottom on the restart there, and took the high line and got shoved there and had the 68 in the middle. He moved up, trying to block me, tried to check up, and just touched him a little bit. We got just run through after that as everybody started checking up. Disappointed in that.”

A series of at least three pit stops to make repairs to the car allowed Allmendinger to remain on the lead lap and ultimately in contention for a strong finish.

“I thought we had a lot of damage when we got hit, and they put it back together. It was pretty good; we were just a little bit tighter than we had been.”

Another pair of yellow flags set up a 68-lap green-flag run to the checkered flag, and varying pit strategy even saw the regular season champion lead the field for 27 laps before he was forced to pit for fuel.

By the time the checkered flag flew, Allmendinger had cycled back to fourth, his ninth straight finish of seventh or better. It was also his 13th top five and 24th top 10 in 27 races.

Never out of it.

“I thought everybody at Kaulig Racing, we brought a really good race car,” he continued. “This is probably our worst mile-and-a-half racetrack at least our last couple years that we’ve been to and struggle at. I thought we had really good speed [with] Daniel (Hemric) winning the first stage and us able to get that second stage win and run up front.

“Just proud of everybody. Andy’s Frozen Custard being on the car, I thought maybe we had a good shot to win the race. Even then, with the damage, we were on a different strategy because we’d run so long under yellow and we had more fuel. We tried to run it long and just got tight there and really used up the tires. What it could have been. It could’ve been a really good day, it could’ve been a really bad day. It turned out to be a pretty good day.”

Following the fourth-place run, Allmendinger heads into Talladega Superspeedway next weekend with a 47-point advantage over Riley Herbst, who currently sits ninth in the standings.