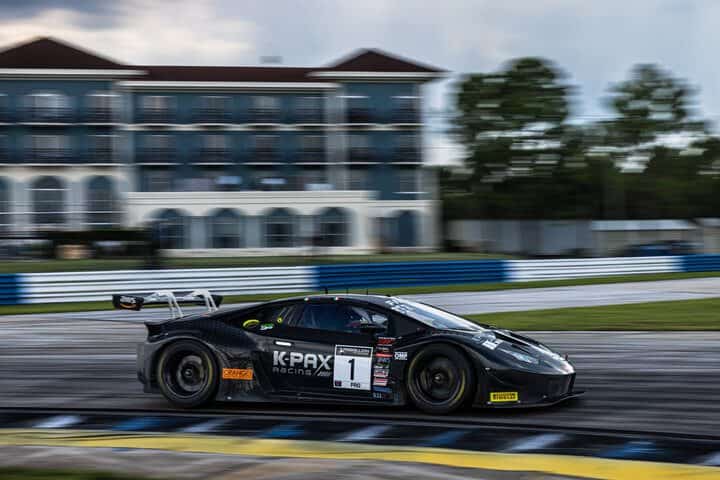 K-PAX Racing’s Andrea Caldarelli and Michele Beretta led nearly flag-to-flag to win Fanatec GT World Challenge America Powered by AWS Race No. 1 Saturday (Sept. 24).  It is the duo’s fifth win of the year together and Caldarelli’s seventh overall win of the year.

“The guys at K-PAX Racing and Lamborghini Squadra Corse [worked] really hard in the three weeks since Road America,” Caldarelli said after the race.  “This result goes to them.”

Beretta started from the pole and led early in his Lamborghini.  For BimmerWorld Racing, however, trouble struck immediately.  The team had struggled Saturday morning in qualifying, when an ECU issue meant that they were unable to set a competitive lap time in either session, meaning that Chandler Hull had to start at the rear of the field.

At the start, there was a scramble near the back of the field that resulted in Hull hitting the left rear corner of RealTime Racing’s Erin Vogel.  That contact spun out Vogel and launched Hull into the concrete wall before he even reached the start-finish line.  The crash ended the race for Hull and Bill Auberlen before they even reached the start-finish line.  Vogel was able to drive her Acura back to the pit lane for repairs but was also unable to continue.

Following a safety car period, Beretta was able to open a small lead on Turner Motorsport’s Michael Dinan.  Dinan, who will only compete in this race this weekend due to a prior engagement, was able to keep up with Beretta for the first 10 minutes or so after the restart.  Eventually, Beretta was able to slowly pull away from everyone else.  By the time the pit window opened up, Beretta had opened a 10-second lead on the BMW.

Meanwhile, by that point, Dinan had fallen into the clutches of Beretta’s teammate Misha Goikhberg.  Manny Franco, making his series debut for Conquest Racing, was not far behind.

Once the mid-race pit stops were made, not a whole lot was different.  Caldarelli was able to maintain the entire lead that Beretta had built for him.  Robby Foley had to deal not only with Jordan Pepper in K-PAX Racing’s No. 3 Lamborghini, but former IMSA WeatherTech SportsCar Championship GT Daytona champion Alessandro Balzan in the Conquest Racing Ferrari.

The lead was 12 seconds leaving the pits, but Caldarelli was able to consistently increase the advantage over the final 47 minutes of the race.  Meanwhile, Pepper continued to work Foley over, trying multiple times to make a move for second.  None of them worked.

In the closing laps, Balzan was able to get side-by-side with Pepper for third, but Pepper was able to hold on.  Meanwhile, Caldarelli drove to an easy win.

The final margin of victory was 25.630 seconds over Dinan and Foley, who had to deal with Goikhberg and Pepper for nearly the entire race.  Balzan and Franco were just behind in fourth.

The result unofficially gives Caldarelli a 50-point lead in the points over his teammate Beretta.  If Pepper cannot beat Caldarelli on Sunday, Caldarelli will clinch his second straight championship.

In Pro-Am, Franco originally qualified on pole.  However, SRO America officials re-classified Franco from Bronze to Silver after qualifying.  That resulted in the Corsa No. 34 Ferrari being moved from Pro-Am to the Pro class.  Wright Motorsports’ Charlie Luck ended up inheriting the class pole.

Luck got a good initial start in order to maintain his position, but his restart 10 minutes into the race was not so swell.  That allowed Racers Edge Motorsports’ Ashton Harrison to get a run on Luck and take the class lead in turn 1.

Most of the race’s first half was a duel for the Pro-Am lead between Harrison, Luck and Crowdstrike Racing with Riley Motorsports’ George Kurtz.  Luck attempted to make moves on Harrison to get the lead back, but was unable to do so.  That said, it appears that Harrison was holding Luck up just a little as Kurtz was able to join the battle from behind.

45 minutes into the race, Luck ran a little too hard into turn 14 and got inside of the curbs.  The move resulted in Luck spinning out.  He didn’t hit anything, but lost a bunch of time.

After the pit stops, Mario Farnbacher was able to hold onto the lead that Harrison gave him, but Colin Braun was right on his tail.  The duo were quickly able to get past Onofrio Triarsi to take fifth and sixth overall and continued to fight each other.  Meanwhile, Jan Heylen had to make up time from Luck’s earlier spin.

Much of the final 30 minutes was a duel for the lead between Farnbacher and Braun.  However, Braun was never really close enough to make a move.  Heylen ran the leaders down in the closing laps, but ran out of time as Farnbacher and Harrison took the win.

Farnbacher and Harrison were 1.101 seconds ahead of Kurtz and Braun at the finish.  Heylen and Luck were third, followed by TR3 Racing’s Jeff Burton and Corey Lewis.  DXDT Racing’s Bryan Sellers and Scott Smithson were fifth.

Fanatec GT World Challenge America Powered by AWS teams have one more race this weekend.  That race is scheduled for 1:15 p.m. ET Sunday afternoon.  Coverage will start at 1 p.m. ET and will be streamed live on the GT World YouTube channel.