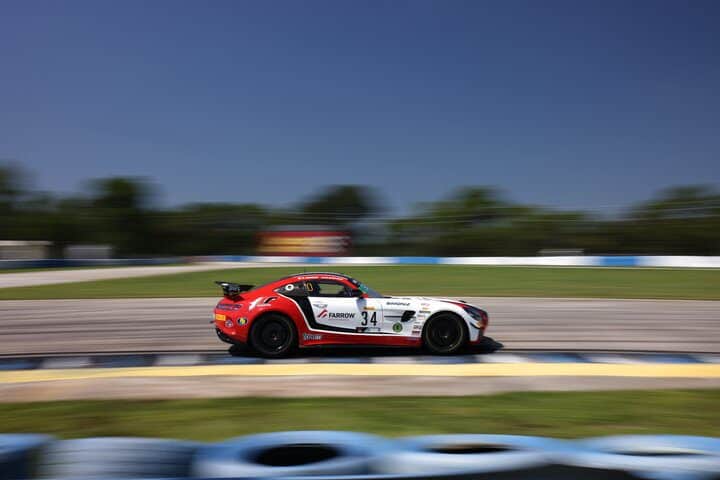 “I had no idea [what was going on],” Sanders told SRO America’s Amanda Busick after the race. “I just kept my foot down and asked [my crew], ‘Did we just win this race?’ Because honestly, I had no idea.”

Rennsport One’s Eric Filguerias started from the overall pole and was able to open up a steady advantage over Stephens. Unlike at Road America, there were no mechanical failures on the Community Beer Works-sponsored Porsche this time. The advantage gradually increased to about three seconds over the 27 minutes that Filguerias was in the car.

Once McAleer got in the car, he immediately put down a couple of really quick laps to expand his advantage. Despite this, Sanders was able to keep pace.

Sanders and Stephens’ margin of victory was 5.622 seconds over McAleer and Filguerias, who managed to coast over the line. AutoTechnic Racing’s Zac Anderson and Austen Smith were third in their BMW.  Accelerating Performance’s Justin Piscitell and Moisey Uretsky were fourth, while Flying Lizard Motorsports’ Andy Lee and Elias Sabo were fifth.

In the Silver class, the top three finishers overall were the top three in class. SMOOGE Racing’s Kevin Conway and John Geesbreght were fourth, while Forbush Performance’s Caleb Bacon and Matt Forbush were fifth.

In Pro-Am, there were early championship implications when the Premier Racing Porsche of Adam Adelson slowed to a stop on track. While Adelson was able to get his car restarted, he had to pit to have his Cayman looked at. He would ultimately continue, but Adelson and Elliott Skeer ended up three laps down in 31st overall, 13th in class.

Accelerating Performance’s Moisey Uretsky, fresh off of a GT4 class win in the GT America race earlier in the day, started from the pole and opened up a couple of seconds over Adelson. When Adelson had his problems, Ross Chouest moved up to second in his Aston Martin, five seconds back.

Uretsky was able to hold onto his advantage to the mid-race stops. Once Piscitell got in the car, he moved up to fourth overall and started to move in on Anderson for third overall. While Anderson had been in front of the Accelerating Performance team for the entire race, Piscitell had a pace advantage. Unfortunately, he was unable to get past.

The interclass battle allowed Lee the chance to run Piscitell. The final lap ended up being a surprising duel between Anderson, Piscitell and Lee. The trio were nearly three-wide at the line, but Piscitell and Uretsky were able to just barely hold on to take the win in fourth overall.

Piscitell and Uretsky’s margin of victory was just .172 seconds over Lee and Elias Sabo. Chouest and Aaron Povoledo were third in their Aston Martin, followed by BSport Racing’s Kenton Koch and Bryan Putt.  AutoTechnic Racing’s John Capestro-Dubets and Tom Capizzi were fifth.

In the Am class, Rooster Hall Racing’s Johan Schwartz qualified a strong third overall and was able to keep pace with Filguerias and Stephens during his stint. While the other leaders chose to pit pretty early in the window, Schwartz made the decision to run long. Such a decision could be bad if Schwartz were to run into trouble.

The move did cost the team some time to BimmerWorld Racing’s James Clay, but Todd Brown still exited the pits with the class lead in fifth overall. It only took a couple of laps for Clay to run down Brown and take the lead in turn 5. A lap later, Brown spun in turn 5 and completely fell out of contention. Brown and Schwartz would eventually finish a lap down in 12th in class (29th overall) after Brown was involved in another incident with Random Vandals Racing’s Al Carter.

Once Clay got the lead, he pulled away to take his and teammate Charlie Postins‘ seventh win of the year. With the victory, the BimmerWorld teammates clinched the Am class title with three races still to run.

Clay and Postins ended up sixth overall. They were 21.919 seconds ahead of Rennsport One’s Nelson Calle and Juan Martinez at the finish. NOLAsport’s Alain Stad and Kris Wilson were third in their Porsche, while KRUGSPEED’s Anthony Geraci and Jaden Lander were fourth. Carrus Callas Raceteam’s Terry Borcheller and Nick Shanny rounded out the top five.

The second race of the weekend for Pirelli GT4 America SprintX teams is scheduled to go green at 11:10 a.m. ET Sunday morning. Coverage is scheduled to begin at 11:05 a.m. ET on the GT World YouTube channel.