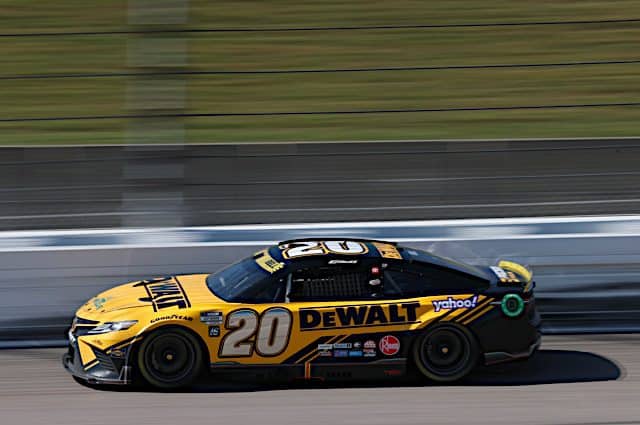 It’s time for the NASCAR Cup Series to visit the Lone Star State, kicking off the next round of the playoffs. Read on for daily fantasy NASCAR DraftKings advice for the AutoTrader EchoPark Automotive 500 at Texas Motor Speedway, the first race in the Round of 12 airing Sunday, Sept. 25 at 3:30 p.m. ET on USA Network.

Texas is the second of four 1.5-mile racetracks in the playoffs and fifth of the year so far (not counting Atlanta Motor Speedway, which is more like a superspeedway than the other intermediates). It’s a 1.5-mile tri-oval where the drivers will run for 500 miles, just the second race of that length or longer for the Cup Series since Memorial Day Weekend.

The last time teams traveled to Texas was for the All-Star Race, which saw two drivers (Kyle Busch and Ryan Blaney) lead the majority of laps. It also featured a huge wreck in which Busch cut a tire and, as he slowed on the frontstretch, Ross Chastain hit him and flew over the No. 18 Toyota. Chastain then came back down and collected Chase Elliott in the process, one of the most violent wrecks we’ve seen this season.

Will we see another big crash this week?

Maybe, maybe not. NASCAR put a resin down and used the tire dragon for this weekend to help create better racing. Also, cars will use a different tire compound than what was used for the All-Star Race. It’s the same tire that was used at Kansas Speedway a few weeks ago, which saw a few flat tires over the opening portion of the race.

How do we approach this weekend for daily fantasy at TMS, since there wasn’t a full field of cars on track in May? Well, you can still examine the results from that event and note who surged ahead over the course of each segment. Additionally, take a look at both Kansas events, as well as Charlotte Motor Speedway and Las Vegas Motor Speedway: these all have the same track length as Texas.

Of course, drivers’ history at this oval could also show who’s more likely to adjust to the Next Gen car on this surface.

Before I move on to my picks for Texas, here’s what happened to last week’s picks at Bristol Motor Speedway:

Well, at least I had the winner, Chris Buescher, in this lineup. That was one of three good scores (though Denny Hamlin didn’t meet his expensive salary). Alex Bowman was caught up in the Big One around lap 277, Busch blew an engine again and Aric Almirola had a steering issue late. Their misfortune sent the DraftKings score lower than I’d have liked.

In the $3,000 Quarter Jukebox tournament, the highest score was 486.15 and had Chase Elliott, Christopher Bell, Chastain, Brad Keselowski, Buescher and Michael McDowell.

As I mentioned earlier, Bell was in the top scoring lineup last week at Bristol in the $3,000 Quarter Jukebox tournament, thanks to his 118 fantasy points on DraftKings. He led 143 laps and recorded 85 fastest laps before ultimately coming home in fourth place. It was his third straight top 10, which includes a third place at Kansas.

While short tracks appear to be his strength this year, Bell has also driven well at some intermediate courses. For example, at Las Vegas he was 10th, fifth at the first Kansas race and Charlotte, and fourth at Pocono. Toyota as a whole has shown strength on this track type this season.

And though he has very limited starts at Texas, he came in third in the past two points-paying races there. I’ll definitely check out his practice speeds this week and will likely have him in several lineups.

I don’t think you should really pay much attention to Chastain’s track history, as most of his starts came with the defunct Premium Motorsports, an underfunded team with little resources. However, he did bring home an 18th in his first Cup race there after he began 31st.

Instead, check out some of the Trackhouse Racing Team’s finishes at the mile-and-a-half tracks this year. At LVMS, Chastain led 83 circuits en route to a third place. Although he placed 15th at Charlotte, he was out front for 153 laps. Lastly, at both Kansas races he came home seventh.

Chastain’s salary isn’t too high, so you might be able to fit one or two dominators with him. Even if you can’t, though, he should still score well, as long as he doesn’t crash again.

Whew, what a rough opening round of the playoffs for Kevin Harvick. His points deficit was too much to overcome, and his run for the championship came to an early end.

Perhaps now he doesn’t feel as much pressure to do well, now that he’s out of the playoffs. It doesn’t mean the No. 4 Stewart-Haas Racing driver doesn’t want to win, though. Harvick’s desire to win is probably the strongest now, especially since his daughter helped to design a mostly-red paint scheme for him.

Harvick’s history at Texas indicates he could go to victory lane, as he’s earned three victories in the past eight races there. He also has 10 top fives and 13 top 10s in the last 14 events, with his lone result outside the top 10 coming at the misty/rainy race in fall 2020.

Although he doesn’t have as many strong results this year on the 1.5-milers, Harvick did get a third place at Charlotte. He also earned his first win of the year at Michigan International Speedway, so you know his team has found speed at these kind of tracks. Let’s see if Harvick can find victory lane once again.

Where Harvick is strong in the Lone Star State, Bubba Wallace is … not so much. He’s crashed out of the last two races there. However, he does have an eighth-place finish in the spring 2018 event while driving for Richard Petty Motorsports. He also came home 14th in July 2020.

This year tells a much different story, as Wallace earned his second career win at Kansas a few weeks ago after he led 58 laps. He also placed 10th at that track in the spring. Plus, he was eighth at Pocono, second at Michigan and ninth at Darlington Raceway.

These longer racetracks suit Wallace well, and I wouldn’t be surprised if he earned his second top 10 there this weekend.

Texas isn’t known to be one of Keselowski’s better racetracks, but he does have some good results there. He’s snagged three consecutive top 10s in the last three events, which includes a fourth place last fall. Plus, in July 2020, he was out front for 15 laps on the way to a ninth-place finish.

But those races were when Keselowski was with Team Penske; how is he doing with RFK Racing this year? Well, in the first Kansas race he gained 16 spots to end in 14th. He earned another 14th at the Tricky Triangle, up 12 positions from where he began. At Michigan, Keselowski drove the No. 6 from 33rd to 15th, while at Darlington he went from 25th to seventh. He even led 109 laps last week, though he didn’t get the finish he wanted due to a cut tire.

If Keselowski performs similarly to other races on intermediates, he should produce a good value for DraftKings.

McDowell’s most memorable moment at Texas was his crash and tumble during qualifying in 2008. But that was 14 years ago; many things have changed since then. He’s had some good results over the last several races at Texas. Since the spring 2018 race, he’s finished in the teens in every other event, including a 17th last year.

McDowell’s had a few good finishes on 1.5-mile tracks this year, too. He placed eighth at Charlotte, sixth at Pocono (after starting 25th) and 16th at the more recent Kansas race.

However, he likely would only score well if he doesn’t qualify near the front, as the further back he is, the more position differential points he could gain.