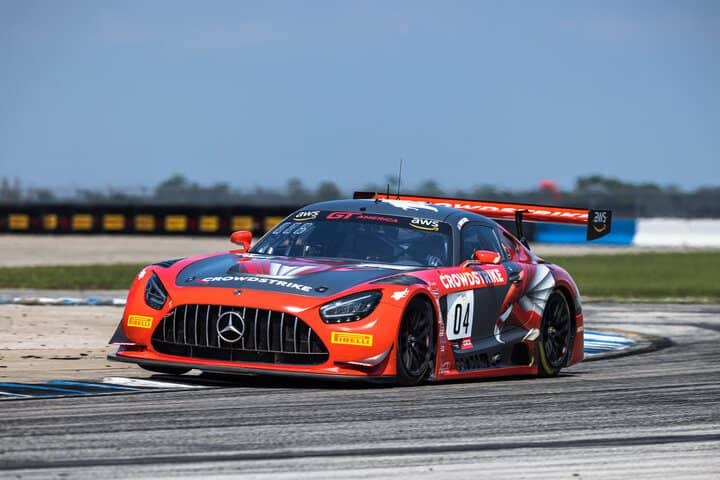 Crowdstrike Racing with Riley Motorsports’ George Kurtz passed Zelus Motorsports’ Jason Harward with 17 minutes to go and pulled away to win GT America Race No. 1 Saturday (Sept. 24) at Sebring International Raceway. It is Kurtz’s seventh victory of the year.

“I was hoping that I would get an opportunity [to get by Harward],” Kurtz told SRO America’s Amanda Busick. “I thought I had him on the start, but he managed to slip by me. I just had to be patient because I knew the GT4 traffic was coming up. I went for [the pass] and I was able to put it away.”

Zelus Motorsport’s Jason Harward qualified on pole in his Lamborghini, but Kurtz got a much better start and swept around the outside of Harward in turn 1 to take the lead. Kurtz’s lead was short lived as Harward got a run exiting the hairpin and was able to snatch it back in turn 10.

Despite the pass back, Kurtz was never far from the rear bumper of Harward’s Huracan. The two drivers proceeded to drive away from Mirco Schultis in the Callaway Corvette to decide the race among themselves.

Kurtz was in position to clinch the GT America SRO3 championship, but Jason Daskalos could still interfere. However, Daskalos had a testing accident earlier in the week that damaged the splitter on his Audi R8 LMS Ultra. As a result, Daskalos was in and out of the pits during the race and finished three laps down at the back of the class. That was enough for Daskalos to score points on the day, but not enough to prevent Kurtz from clinching the title.

Ultimately, lapped traffic played a huge role in the outcome of the race. Just past halfway, the leaders ran up on the frontrunners in the GT4 class. On the run to the hairpin, Harward got held up behind GMG Racing’s Jason Bell. That was all Kurtz needed to sweep around the outside of Harward and get the lead back before the braking zone for the hairpin. Once out front, Kurtz pulled away to take the win and clinch the title.

The margin of victory was 17.082 seconds over Harward.  Schultis was third, then Jeff Burton.

In GT4, Accelerating Performance’s Moisey Uretsky (who will be making his IMSA Michelin Pilot Challenge debut next weekend at Michelin Raceway Road Atlanta) qualified on pole and managed to get a good start to hold onto the point. Premier Racing’s Adam Adelson gave chase at first, then dropped back.

Adelson ended up dropping into a five-way battle for second with Bell, Ross Chouest, Andy Pilgrim and Robb Holland. Chouest made a move for the spot on Adelson at the hairpin, but was unsuccessful. Eventually, Adelson got back in his rhythm and pulled back away.

Ultimately, Chouest and Bell ended up in a fierce battle for third. The two bumped each other multiple times before Bell made the pass in turn 3 with three minutes remaining. Then, some strange things happened. The contact made Chouest’s Aston Martin unstable. As a result, he dropped back to sixth in class.

For Bell, it ended up far worse. He ended up spinning off the track in turn 5 all by himself and hit the tires. The incident put him out of the race and ruined what was going to be a great day.

Meanwhile, Uretsky lead by as much as 7.5 seconds en route to his second GT4 win of the year. Uretsky’s margin of victory was 3.629 seconds over Adelson. A series of issues on the final lap resulted in Pilgrim finishing third, followed by BSport Racing’s Bryan Putt coming from a pit lane start to finish fourth. Flying Lizard Motorsports’ Elias Sabo was fifth.

Race No. 2 for GT America teams is scheduled for 9 a.m. ET Sunday morning. Coverage of the event will start at 8:55 a.m. ET on the GT World YouTube channel.