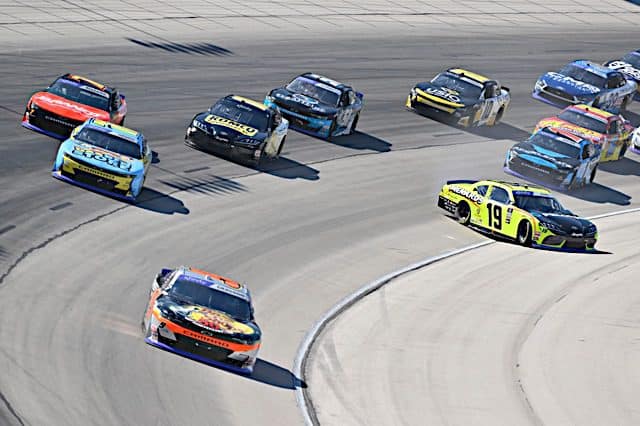 FORT WORTH, Texas — Noah Gragson scored his seventh win of the NASCAR Xfinity Series season and his fourth in a row in dominating fashion at Texas Motor Speedway, leading a race-high 85 laps in the Andy’s Frozen Custard 300. When it was all said and done, only seven other cars finished on the lead lap with Gragson.

Gragson looked impressive in the early laps, as he led 10 early and drove from 13th to fourth on new tires in a four-lap shootout to end stage one. Gragson was forced to pit under the stage caution for loose lug nuts, and he dropped down to 18th. Falling into the pack proved to be no issue either, as Gragson drove from 18th to third in the 27 green flag laps to start stage two.

Gragson finished second in stage two and took the lead for the final stage by staying out.

Despite Gragson climbing through the field multiple times, winning was no guarantee. John Hunter Nemechek was the dominant car early as he led 60 of the first 81 laps. Daniel Hemric was having one of his best performances of the year, as he won the first stage, led 12 laps, and shadowed Gragson during his march through the field. Gragson’s JR Motorsports teammate Justin Allgaier also looked like a top-five car throughout the afternoon, and polesitter Brandon Jones had worked his way back into the top 10 after nearly spinning out in the first corner of the first lap.

The field lined up for another restart on lap 117 with Gragson in the lead and all of his closest challengers right behind him. But it was this restart that proved to be the turning point of the race, as Nemechek, Allgaier, Hemric and Jones all became part of a nine-car crash on the backstretch.

With track position king at Texas, Austin Hill quickly took Gragson and Nemechek three-wide into turn 1 on the restart. Nemechek drifted up the track into turn 2, and that allowed Allgaier to peek a nose and make it four-wide. Four-wide proved to be too much, as Nemechek lost control in the marbles and sparked a huge melee.

Nemechek drifted back into the path of Allgaier, and both drivers suffered nasty hits into the outside wall. Jones had nowhere to go and crashed right into the back of the duo while Hemric, Mason Massey, Brennan Poole and Josh Williams were collected in the aftermath.

The crash was an especially tough break for Nemechek, as it was his first start in the No. 18 Joe Gibbs Racing Xfinity car since Dover Motor Speedway in April.

“It sucks that we tore up a racecar after leading so many laps,” Nemechek said.

“I know that we were three-wide in the PJ[1] and I think we ended up four-wide at one point, and just lost it and a lot of cars got involved. It sucks, our Romco Toyota Supra was fast, that’s for sure.”

Allgaier showed winning potential in another race at Texas, but his maiden Xfinity win at the track will have to wait at least another year.

“I thought [track position] was going to be a big deal to get clean air and the No. 18 (Nemechek) started to get loose,” Allgaier said. “I tried to get left as much as I could but had to leave the No. 9 (Gragson) room without crowding him. The No. 18 just spun right into our right front and it’s game over from there. Really hate it for our team.”

For Hemric, it was a disappointing end to what was shaping up to be one of his best performances of the season. But with 17 stage points acquired in the race’s first half, Hemric was at least able to minimize the damage from a 30th-place finish.

“Hate it for everyone with the DaaBIN store Chevrolet, but everyone at Kaulig Racing took a step in a huge way in the right direction to give us one step forward in speed this week, which is great,” Hemric said. “Unfortunate, but with racecars like that we can have a chance to go the next two weeks and lock ourselves in with a win.”

Jones was the polesitter for the third time in the last four races, but he was playing catch-up the entire afternoon before the crash prematurely ended his day.

“We just didn’t get any stage points, that’s what hurt today,” Jones said. “I just think that with the weird spin early on … that set the tone and just got us so far behind in traffic. I told some people early on before the race that the key to winning this is to hold track position, and once we got back, we were just playing catch up from there. It’s a tough day to swallow here for sure, but we’ll keep pushing here.”

With four serious contenders for the win eliminated, Hill, Ty Gibbs and AJ Allmendinger became the biggest challengers to Gragson in the final 83 laps.

After one more caution on the lap 127 restart, the race resumed on lap 133 and went green for the final 68 laps. Gragson quickly cruised out to a three-second lead, as Hill and Gibbs were left battling each other for second.

Gragson made his final pit stop of the afternoon on lap 156, and he was now at the mercy of the other drivers on the lead lap. Allmendinger’s team delayed pitting for as long as possible in an attempt to trap Gragson one lap down with a caution, but the caution never came. Allmendinger pitted from the lead with 17 laps to go and wound up fourth at the finish.

The final 10 laps saw Gragson out front with Hill trying to close a one-second gap. But Hill was unable to make up any ground, and Gragson took the checkered flag to join the late Sam Ard as the only drivers to win four Xfinity Series races in a row.