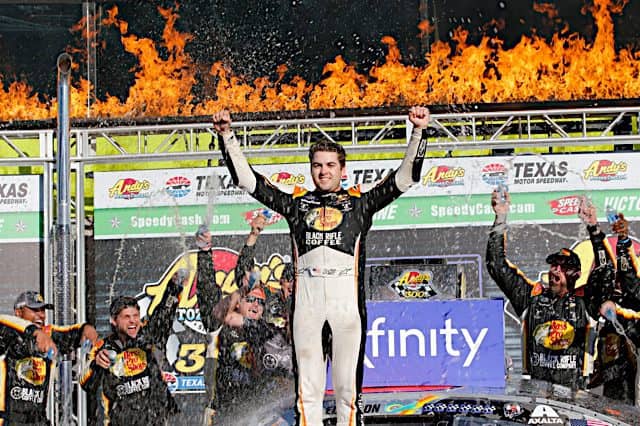 Ladies and gentlemen, we have a new “Mr. September.”

Noah Gragson avoided two big crashes to score his fourth consecutive NASCAR Xfinity Series win in the Andy’s Frozen Custard 300 at Texas Motor Speedway (Sept. 24). Gragson led 85 laps on the day, retaining the lead following a green flag pit stop cycle with about 10 laps to go en route to victory at the opener of the series playoffs. The win makes Gragson only the second driver in series history to win four in a row, with Sam Ard first accomplishing the feat in 1983.

“This No. 9 team–man, they’re on fire,” Gragson told NBC Sports. “You fans, you keep us motivated to come back and win more races. You guys are awesome. We appreciate you. Thanks for coming out! This pit crew has done awesome; my car was as fast as Xfinity internet all day and just so thankful for the opportunity.”

Richard Childress Racing’s Austin Hill came home in the runner-up spot, while Ty Gibbs finished third after starting the race from the rear. AJ Allmendinger survived a crash and right-front tire issue to finish in fourth, and Riley Herbst brought his Stewart-Haas Racing No. 98 home in fifth.

The race immediately produced a hold-your-breath moment, as polesitter Brandon Jones got loose following contact from Daniel Hemric in turn 1, giving the lead to Gragson. John Hunter Nemechek took the lead on lap 12 before the first caution of the day flew a few laps later for Jeffrey Earnhardt.

Big damage for Jeffrey Earnhardt to bring out the first #XfinitySeries caution.

With nine laps to go in stage one, McLaughlin went for a spin, bringing out the yellow. That gave teams the chance to make a strategy call, with race leaders Nemechek, Gragson, and Gibbs opting to pit.

Hemric assumed command with three laps to go and would hold off Justin Allgaier to earn his third stage win of 2022.

Gragson was forced to pit with drivers on the opposite strategy after the stage due to loose lug nuts, putting him back in 18th to begin stage two. Nemechek retained the lead, holding it for the majority of the stage before another yellow flew for David Starr with about 10 laps to go. That is where the chaos began for playoff drivers.

Jeremy Clements reported a loss of power in his car, ultimately forcing him behind the wall to change the battery. Nemechek, Jones, Gragson, and Gibbs all pitted, while playoff drivers, including Hemric and Allmendinger, stayed out. This time, it was the other Kaulig driver winning the stage, as Allmendinger sped to his third stage win of the season.

Here are the drivers who finished in the top 10 in stage two, with @KauligRacing sweeping the first two stages:

It was the final stage of the race that ultimately turned the tide. With 91 laps to go, Allmendinger made contact with Brandon Brown, igniting a multi-car crash that included Landon Cassill and Ryan Sieg.%

Brandon Brown gets in front of AJ Allmendinger.

But that was only the beginning. Shortly after a restart on lap 116, Nemechek got loose in turn 2, making contact with Allgaier. The two became a blockade on the backstretch, triggering a nine-car pile-up. Playoff drivers involved were Allgaier, Hemric, and Jones.

After wrecking in a battle for the lead, @J_Allgaier explained to @NASCARBeth his racing superstition:https://t.co/B6Hq43l9jM

Gragson retained the lead with 68 laps to go, holding it until 44 laps to go when he made his final pit stop of the day. The runner-up spot changed hands between Hill and Gibbs, but neither were able to chase the No. 9 down.  Allmendinger, Berry, and Jeb Burton stayed out for extended periods of time to lead, but Gragson ultimately cycled back to the lead to grab the victory.

The next race will be at Talladega Superspeedway, set for Saturday, Oct. 1 at 4 p.m. ET on the USA Network.

Is it unofficial because this was written before post-race inspection was completed?
If not, how can he not be locked into the next round?

Luken Glover
Reply to  Bill B

Correct, this was published before post-race inspection. Gragson is officially the winner now.