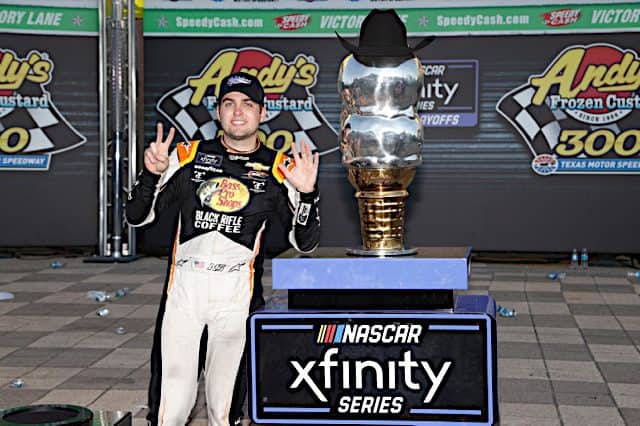 Noah Gragson has not lost a NASCAR Xfinity Series race in a month. Let that sink in.

Gragson came across the line first for his fourth straight win and first playoff win of the 2022 postseason. Behind him, Austin Hill, Ty Gibbs, AJ Allmendinger and Riley Herbst filled out the rest of the top five.

This was the first playoff race for the Xfinity Series, and Gragson wasted no time in punching his ticket to the next round. It’s those that came up short, though, that we’ll discuss later.

Despite plenty of factors working against him, the veteran driver found a way to have a very productive day as he avoided the biggest wreck of the afternoon and put himself in a good position to potentially advance to the Round of 8 ahead of a superspeedway where anything can happen.

Never out of it.

Not only did Noah Gragson win the race, but he also managed to add his name to the record books. That fourth straight win tied him with the legendary Sam Ard for the most consecutive Xfinity Series wins. Ard set his record all the way back in 1983 (I’m sorry if that doesn’t seem like that long ago, but it was almost 40 years).

Wrecking out always sucks, but at least that can be blamed on the incompetence of other drivers sometimes. Jeremy Clements did not have that luxury on Saturday.

Clements suffered an ignition system failure that was originally thought to be a dead battery. After swapping out the battery, it was determined that it was a much larger ignition system issue, and the car was pushed back to the garage. Clements is the underdog story in these playoffs — he’s had to fight not only the other drivers, but even a NASCAR appeal just to get here.

With the 36th-place finish today, Clements would typically have put himself in a must-win situation. However, so many other playoff drivers had such poor performances that Clements might still have a shot.

Speaking of other playoff drivers who didn’t have a good race, Brandon Jones brought his ride home in a disappointing 27th place after starting on the pole. Trouble started early for Jones as he spun on his own in turn one on lap one.

Jones has been tapped as the replacement for Gragson in the No. 9 JR Motorsports Chevy next season and has high hopes hanging on his shoulders. Aside from qualifying on pole, Saturday did not go a long way toward meeting those expectations.

Call me crazy, but none of the schemes really stuck out to me this week, so we’re bending the rules a bit for this one and looking ahead a bit.

Ryan Vargas has become some sort of social media marketing genius because this week makes two huge platforms that have sponsored the 22-year-old driver.

I’m so excited to share with you all the @NASCARonReddit community & @Reddit’s OrangeRed colors will be adorning our Chevy Camaro next weekend at Talladega!

To have the support of +850K community members means a lot, and I hope to do them all proud at ‘Dega! pic.twitter.com/FwJZx4bAml

The TikTok-sponsored ride was one bad-ass-looking race car. It used a mixture of gloss black and hip colors that are in the app’s logo to create some unconventional shapes, which made the car really pop.

This time around, though, Reddit sponsored Vargas’ ride, and it resulted in a more classic look — and a great one at that. The orange and white almost make the car look like a really fast creamsicle, which is really making me hungry. For an extra “cool” factor, Vargas’ car had almost 1,400 r/NASCAR Reddit community members’ handles on the bumper.

Vargas, JDM, and their crew have put together some fantastic schemes this season. Now they just need them to run closer to the front.

Obviously, Clements is now the back marker as far as the playoff picture goes, but Jones and Daniel Hemric aren’t that far ahead of him in 11th and 10th. Gragson, of course, punched his ticket to the next round already, and Allmendinger is right behind him. Hill, Josh Berry and Justin Allgaier are currently in the next three spots behind them, all separated by no more than 10 points. For the full breakdown on Jayski.com, check this out.

Before the race, Cup Series drivers yet again said what we’ve all thought about Texas for the past few seasons — it’s crap. Kyle Larson even said that it should be demolished.

When asked what he would like to see as far as reconfiguration goes, Joey Logano was adamant that he didn’t want another superspeedway configuration, which I can agree with. That’s Atlanta’s thing now, and it’s best to let them have it.

Realistically, that means making it a short track would be the best option. However, if that happens, I don’t think it will stay on the playoff schedule. That raises the big question, though: What replaces it?

I, personally, would like to see another road course. There’s already a superspeedway with Talladega, so you have one extreme in which anything can happen. The ROVAL is on the schedule already, but as we all know, it’s more of a hybrid track, making it a fun race to watch.

However, there are no true road course races, and I think I know exactly where I’d put it if NASCAR, for some reason, suddenly decides to put me in charge: Sonoma.

Sonoma is an excellent facility that’s been challenging drivers for longer than any of us truly care to remember. The ROVAL has its infamous turn, and Sonoma has its own. It adds a dynamic to the Xfinity Series that I think is important when it comes to assessing the all-around talent of drivers, and I think it would make the perfect place for a playoff race.

As mentioned earlier, the Xfinity playoffs are headed to Talladega next week for some superspeedway action. Gragson won the first race at ‘Dega this year and is understandably the favorite to repeat again with his current hot streak. However, as any fan knows, anything can happen at the 2.5-mile tracks, and there are 11 other drivers who still desperately want to punch their own ticket to the Round of 8.

That race is next Saturday, Oct. 1, with the green flag dropping at 4:00 p.m. ET. The race will be aired on USA, the Motor Racing Network and Sirius XM NASCAR.

A little of Noah’s victory celebrations go a long way. I get the obnoxious burn outs, shot gun beer and fence climbing. Act like you been there before. It’s all fun and games until someone falls on their head.