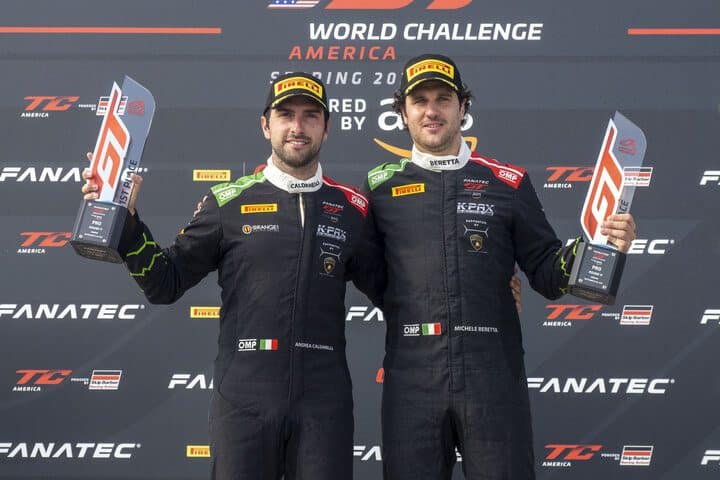 K-PAX Racing’s Andrea Caldarelli and Michele Beretta took the lead during the mid-race pit stops and ran off and hid to win Fanatec GT World Challenge America Powered by AWS Race No. 2 at Sebring International Raceway Sunday (Sept. 25).  It is Beretta and Caldarelli’s sixth victory of the year as a duo.  For Caldarelli, it is his eighth win of the year in 12 races and clinched him the Pro championship.

“It looked easy from the outside, but when you’re [in the car], you have to push and squeeze to get everything out of the car,” Beretta told SRO America’s Amanda Busick.  “I think we had a perfect weekend.”

Conquest Racing’s Alessandro Balzan started from the pole in his Ferrari and just barely held off Triarsi Competitzione’s Ryan Dalziel for the overall lead.  Behind the Ferraris, K-PAX Racing’s Jordan Pepper was able to get past Caldarelli to take third in the Pro class.

Eventually, Caldarelli was able to get back past Pepper for third overall and quickly tried to run down the leaders.  By the time the mid-race pit stops came around, Caldarelli was right on the rear bumper of Dalziel, who was two seconds behind Balzan.

The pit stop severely hurt Conquest Racing.  The swap over to Manny Franco took about 12 seconds too long, which cost them the lead.  K-PAX Racing’s stop was just under the minimum allowed time, but the team is allowed to use a one-second “joker” once per weekend and still be within the regulations.

As a result, Beretta ended up with a six-second lead over Triarsi Competitzione’s Justin Wetherill and 15 seconds over Franco.  That margin quickly began to grow by between one and 1.5 seconds a lap.

Ultimately, there was a dog fight for third overall between Charlie Luck, George Kurtz, Misha Goikhberg and Franco.  Franco was able to get past Kurtz and began to pressure Luck for third overall with 20 minutes to go.

With five minutes to go, Franco got by Luck for second overall with Goikhberg giving chase, but Franco could do nothing to prevent the black Lamborghini’s weekend sweep.

Caldarelli and Beretta’s margin of victory was 41.274 seconds over Balzan and Franco.  Goikhberg and Pepper were another 1.691 seconds back in third.

In Pro-Am, Saturday’s winner Mario Farnbacher was forced to pit prior to the start of the race due to an apparent brake issue.  The issue put them at the rear of the field for the start.  Farnbacher was able to join shortly after the start, but after one lap, it was clear that something was still wrong in the Acura’s braking system.  After additional repairs, Farnbacher returned to the race, three laps down.

Dalziel started second overall and proceeded to drive away from the rest of the class.  He was able to keep pace with Balzan to an extent as well.

Meanwhile, DXDT Racing’s Bryan Sellers was second in class and doing battle with Wright Motorsports’ Jan Heylen.  Sellers held onto the position until he went wide in Sunset Bend 30 minutes into the race.  That allowed Heylen to slip past.  The lack of momentum allowed Crowdstrike Racing with Riley Motorsports’ Colin Braun to get a run and sweep past entering turn 1.

Like Conquest Racing, Triarsi Competizione didn’t have the best pit stop.  The team lost about four seconds of their lead over Luck during the sequence.  Wetherill was able to put a little space between himself and Luck at first, but the margin began to shrink over time.

From there, Luck was able to pull away to give himself and Heylen their fourth class win of the year.  Luck and Heylen’s margin of victory was just .447 seconds over BimmerWorld Racing’s Bill Auberlen and Chandler Hull.  Hull was on a roll in the final 20 minutes and made up significant ground.

Wetherill and Dalziel had to settle for third, followed by Braun and Kurtz.  Sellers and Scott Smithson were fifth.