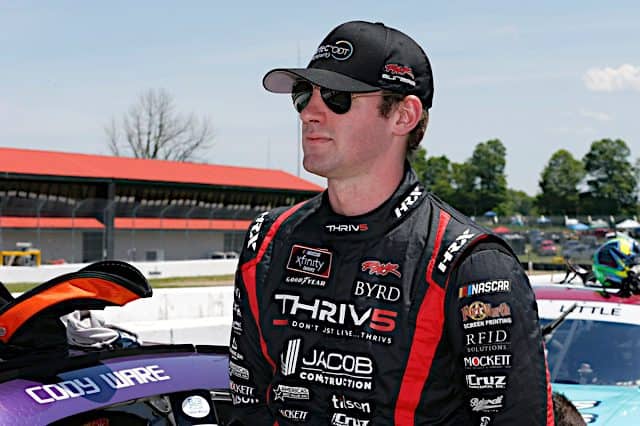 That’s never what you want to hear a driver say after they’ve had a hard crash at the racetrack, but it’s exactly what Cody Ware said over his team radio after he crashed in Sunday’s (Sept. 25) AutoTrader EchoPark Automotive 500.

The single-car accident during stage two saw Ware slam the outside wall before careening down pit road and coming to a stop after barreling into the pit road wall and coming to rest.

Here is a replay of what happened to @CodyShaneWare.

A very hard hit for the No. 51. He is being taken to the infield care center.#NASCAR #NASCARPlayoffs pic.twitter.com/9F9k8CIKVF

Ware needed assistance and was loaded onto a stretcher for the ride to the infield care center. Nearly an hour passed with no updates on his condition, but after the lengthy stay, the driver of the No. 51 Ford was released.

Ware did not speak to media after his release from the care center.

“He has been treated and released,” Rick Ware Racing representative Robby Benton said. “We are thankful to the track crew here. We had a bit of a delay going through the normal protocol of x-rays and reviews and making sure there were no fractures. All of that came back clear. He will be on the team plane with us to return to Charlotte tonight and we are happy he is okay.”

Ware “will see a specialist with Ortho Carolina” this week, but the team is “thankful … he will be OK to go home tonight.”

After undergoing concussion protocols, it was confirmed Ware did not suffer from a concussion. Further updates from the team are expected around midweek.

That was by far the scariest incident in an incident filled race. I’m happy for him, that the news is as good as it is.