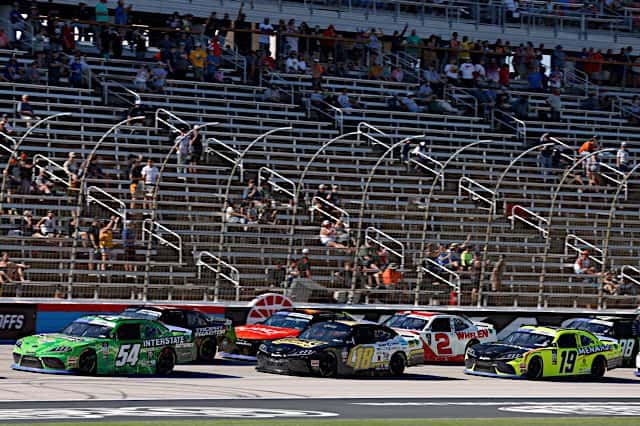 FORT WORTH, Texas — Texas Motor Speedway was reconfigured before the start of the 2017 season, and the new layout has proved to be unpopular with fans and drivers. After hosting two Cup Series dates yearly from 2005 to 2020, Texas lost its spring race to Circuit of the Americas for 2021. In compensation, the track was awarded the All-Star Race. But that deal was for just two seasons, and Texas will be down to one Cup weekend for the first time since 2004 next season.

With the track losing a weekend, questions have arisen regarding the future of the speedway. There have been rumors that the track will be repaved or reconfigured in the near future, but nothing is concrete.

During Saturday morning’s (Sept. 24) press conferences in the Texas Motor Speedway media center, Frontstretch asked Kyle Larson what he would want a potential Texas repave to look like. Let’s just say that he didn’t sugarcoat his response.

Asked @KyleLarsonRacin about a potential Texas repave/reconfiguration. He didn’t hold back in his response:

“I would like them to demolish this place first and then start over from scratch.” pic.twitter.com/v220CjWduj

Larson swept Texas in 2021 by winning the All-Star Race and the 500-mile race in the fall and it is telling that he wants Texas to start over from square one.

That initial interview set the tone on Saturday afternoon, and drivers were asked what they would want out of a potential Texas reconfiguration. Driver responses varied, but just about everyone agreed that trying anything would be better than the current layout.

Alex Bowman had a press conference 15 minutes after Larson, and he was asked the same question after Larson’s blunt response moments earlier. He echoed the same sentiments, but also expressed concerns about the potential for Texas to become a clone of Atlanta Motor Speedway.

“If I think you leave it up to the drivers, you have what Kyle [Larson] said, you know, short track of some sort,” Bowman said. “If you leave it up to the fans, I’ve heard a lot of people want another Atlanta. I don’t really think any of the drivers want another Atlanta, but we’re not here for us, we’re here for the fans, right?

“It’ll be interesting to see if anything does happen. Obviously, there’s a lot of rumors flying around. But the racetrack we have right now has not produced what we want, right? There’s lot of people working hard on it and thinking how to make it better, but you got to do something.”

“Anything would be better at this point,” Hamlin said.

When asked, Christopher Bell told reporters that simply putting another layer of pavement on the track would not solve any problems and that issues with Texas run deeper than that.

“It’s so tough, because the word ‘repave’ basically defines what our struggles are at Texas,” Bell said. “I understand trying to do something different because the track hasn’t aged as well as some of the other tracks on the schedule, but you know, if we repave, we’re definitely delaying that process another handful of years.”

Daniel Suarez gave a long answer on what to do with Texas, and he was in support of reconfiguring Texas to something similar to other 1.5-mile tracks in order to provide the track with the great racing that the Next Gen has had to offer on intermediates.

“Something similar to Charlotte, something similar to Kansas,” Suarez said. “I think that would be really good. I mean, what we had here in Texas, in my opinion, before the repave was pretty damn amazing. I think the configuration of the racetrack is not an issue, just the pavement and how wide it is. Like the way the racetrack is in [turns] 1 and 2, probably will never get to [riding the] wall, just because it is so flat and so wide. The wall will never be an option.

“We just have to build racetracks that can give us an option to run middle, bottom and top.”

On Twitter, Xfinity Series driver Ryan Vargas was in favor of turning Texas into a short track, in this case Iowa Speedway.

After Noah Gragson‘s fourth Xfinity win a row later that afternoon, team owner Dale Earnhardt Jr. was in the media center for questions. He, too, was asked about the future of Texas, and said if the track were to be changed, it would really have to fit inside the current footprint of the racetrack.

“I would assume that the grandstands are going to stay, and the condos in turn 2 aren’t going anywhere,” Earnhardt said. “I doubt the Big Hoss [TV] is going anywhere. So, whatever you’re going to do has to fit in this footprint. A half-a-mile short track is not happening, and a 2.5-mile superspeedway isn’t happening. Whatever happens, has to fit where the track is now.

“In my opinion, I would either do one of two options … I would revert back to the original configuration in turn 1 and 2. I would leave turn 3 and 4 the way it’s been. I might not even touch the track and wait until what I see tomorrow.”

Most of the races we don’t like here happen at night,” Earnhardt added. “Let’s see what this racetrack looks like during the afternoon. Everybody might love it. We could have a great race tomorrow and everyone would go, ‘well, now what do we do?'”

There are no confirmations of changes to Texas at the moment. But if the recent media sessions were any indication, drivers and fans alike feel that something needs to change at Texas as soon as possible if today’s (Sept. 25) race fails to deliver. And with the track right inside the fourth-largest urban area in the United States, it is crucial that any changes are done right.

Twilight race going from day to night.
Would fix the tire prob;em first.

Bill B
Reply to  Mr X

Change it into a mile and a quarter OVAL like Richmond was before the NA$CAR geniuses ruined it.