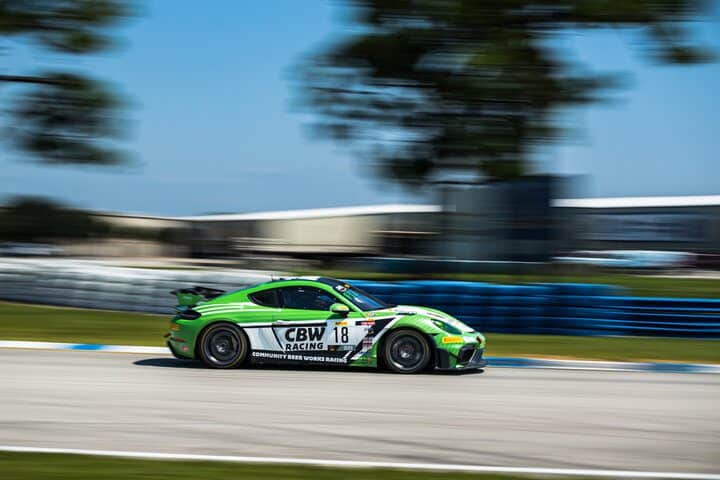 Rennsport One’s Stevan McAleer and Eric Filguerias recovered from a last-lap fuel pump issue Saturday to completely dominate to win Pirelli GT4 America Sprint Race No. 2 at Sebring International Raceway on Sunday (Sept. 25).  It is the duo’s ninth overall win of the year.

“Stevan [McAleer] gave me a fantastic car and fantastic position,” Filguerias told SRO America’s Amanda Busick.  “From there, it was all about managing [the gap], managing the pace and bringing [the car home].  That’s what we did today.”

McAleer started from the overall pole and led early over NOLAsport’s Jason Hart.  Meanwhile, an incident further back in the field resulted in BimmerWorld Racing’s James Clay spinning out at the entrance to turn 1.  Rennsport One’s Juan Martinez and AutoTechnic Racing’s Alex Filsinger were also involved.  Filsinger ended up with a flat right front tire and right front damage.  Though Filsinger was able to drive back to the pits, a piece of debris came off between turns 11 and 12.  That debris stayed in the middle of the track for the whole race but never drew a caution.  Filsinger did not return to the race after pitting.

Conquest Racing’s Gavin Sanders, winner of Race No. 1 on Saturday, failed to set a time during his qualifying session Saturday.  As a result, he had to start from the rear of the field.  In the opening minutes of the race, Sanders was able to drive up to 19th overall from 31st.  By the mid-race pit stops, he was up to 15th.  A strong stop to put Michai Stephens into the car moved the team up into the top 10 overall and third in the Silver class.

McAleer slowly but surely opened up his advantage over Hart.  By the time the mid-race pit stops came along, McAleer had a six-second lead.  Unlike some of the Pro-Am squads, McAleer chose to pit at the halfway point to give way to Filguerias.

Once Filguerias was in the car, he continued to open up the advantage over Scott Noble in the NOLASport Porsche.  Laps that were consistently about a second quicker than Noble’s white, yellow and black Porsche tore the race wide as Filguerias took an easy victory.

The final margin ended up being 23.469 seconds over Noble and Hart.  Stephens and Sanders drove all the way up from the rear of the field to finish third overall, only a second behind Noble at the finish.  Flying Lizard Motorsports’ Elias Sabo and Andy Lee were fourth, followed by Premier Racing’s Adam Adelson and Elliott Skeer.

In Silver, Filguerias and McAleer’s margin of victory was 24.540 seconds over Stephens and Sanders.  The finish was just enough to take the Silver championship to Indianapolis.  AutoTechnic Racing’s Zac Anderson and Austen Smith were third, then SMOOGE Racing’s Kevin Conway and John Geesbreght.

In Pro-Am, Hart was able to hang with McAleer during the opening laps.  That allowed him to pull away from BSport Racing’s Kenton Koch prior to the opening pit stops.

After the stops, Noble continued to hold onto the advantage.  Meanwhile, BSport Racing’s Bryan Putt and Sabo battled hard for second.  With just under 15 minutes to go, Sabo went to the inside in turn 15 to go for second.  He ended up losing control of his Aston Martin and spinning out.  No contact was made, and Sabo was able not only able to continue, but held onto his position.

Noble was able to hold on for the win, but there was movement on the final lap.  Sabo ran into the back of Putt while racing for position.  That contact did not cause an incident, but Putt did slow entering the Uhlmann Straight on the final lap, which allowed Sabo past.

The margin of victory was 6.982 seconds over Sabo and Lee.  Adelson and Skeer were third, while Putt and Koch’s Aston Martin crawled to the line for fourth.  AutoTechnic Racing’s John Capestro-Dubets and Tom Capizzi were fifth in their Mercedes.

In the Am class, the first corner incident for Clay threw the race up in the air.  Carrus Callus Raceteam’s Terry Borcheller put his Toyota up into the class and opened up a decent gap on the rest of the competitors.  Once the pit stops were made, Borcheller’s teammate Nick Shanny still had the advantage.  However, the BMW of Random Vandals Racing’s Paul Sparta was able to run him down and take the lead with 20 minutes to go.  From there, Sparta was able to pull away while KRUGSPEED’s Anthony Geraci moved up to second.

Geraci tried to run down Sparta but had a mechanical issue in the final five minutes of the race put Geraci out and moved Conquest Racing’s Custodio Toledo up to second.  Meanwhile, Sparta took his and teammate’s Al Carter‘s first win of the year.

Carter and Sparta ended up 13th overall.  They were 6.080 seconds in front of Toledo and Paulo Carcasci at the finish.  BGB Motorsports’ Thomas Collingwood and John Tecce were third in their Porsche, with Rooster Hall Racing’s Todd Brown and Johan Schwartz right on their tail.  Shanny and Borcheller ended up fifth.

Pirelli GT4 America SprintX teams have one more race weekend to go at the Indianapolis Motor Speedway.  Race No. 1 is scheduled for 9:15 a.m. ET on Saturday, Oct. 8.

Sabo followed Capizzi past into second while Edgar Lau entered the mix. The Silver entries of Conway and Sanders also caught up with the battling.