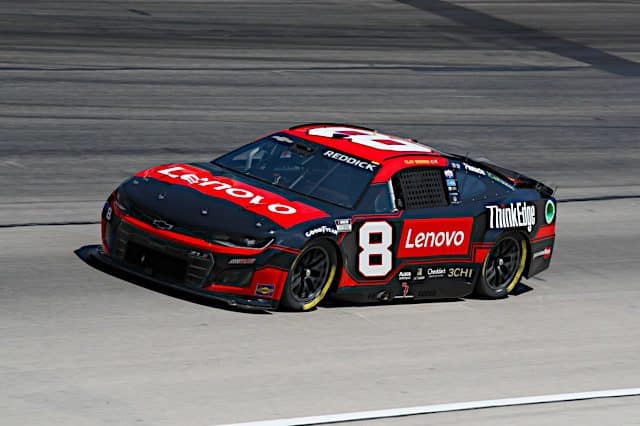 It’s likely that only a small group of people will leave Texas Motor Speedway on the evening of Sunday (Sept. 25) satisfied with the NASCAR Cup Series’ Autotrader Echo Park Automotive 500.

Race winner Tyler Reddick and his Richard Childress Racing No. 8 team are among that small number.

Maneuvering past Ricky Stenhouse Jr. with 54 laps to go, Reddick comfortably fended off Joey Logano until the checkered flag, but the experience was likely far from comfortable. The three previous race leaders had blown right rear tires from the front, and if anyone is familiar with heartbreaking blowouts, it’s surely the young Californian.

But the tires held up and Reddick maintained his lead to the end, claiming his third career NASCAR Cup Series victory, all of which have come in 2022. After his elimination from the playoffs last week, it marks a record-tying fourth consecutive race won by drivers ineligible for the championship.

He wins at @TXMotorSpeedway, and the team says they're "NOT DONE YET!" pic.twitter.com/0FSfazCVaa

Speaking to NBC Sports from the frontstretch, the winning driver admitted the tires had him, “extremely worried” in the closing laps.

“Unfortunately, every time we’ve had fast cars we’ve had some tire problems,” continued Reddick. “That last run the right sides were vibrating really, really hard there. I was just trying to maximize and use the advantage, the gap that I’d built over Joey [Logano] … every time we’ve had a strong car we get bit by something. Just really proud to get this Lenovo Chevy to Victory Lane”

With the safety and reliability of the Next Gen car and Goodyear tires a topic of discussion from Bristol Motor Speedway last week, the conversations will continue on the way out of Texas. Like clockwork, Goodyear tire failures bit contender after contender after 35 green-flag laps, and headlines will be stolen by a terrifying crash that could easily have been even worse.

On two separate occasions, Christopher Bell’s No. 20 suffered flat right-rear Goodyears. When the first one failed in turn 4 on lap 79, a quick reaction from the Oklahoman got the Rheem Toyota onto pit road with minimal damage. Catching a caution kept Bell on the lead lap.

The second time he was not so lucky. On lap 137, also in the fourth turn, the right rear went down again, sending Bell backwards into the SAFER barrier and out of the race. He was scored in 34th position.

Bookended by Bell’s tire issues was Alex Bowman, who also blew a tire in the fourth corner and crashed hard. Bowman’s Hendrick Motorsports crew took full advantage of the extended 10-minute damaged vehicle policy to keep the Ally No. 48 on the racetrack, albeit several laps down and off the pace.

On lap 168, the Rick Ware Racing No. 51 car broke loose in the middle of turns three and four, spearing the SAFER barrier and continuing on at a high rate of speed, striking the pit wall only four feet past the 90 degree opening.

Driver Cody Ware was able to climb from the car under his own power, but collapsed behind the pit wall. He was taken to the infield care center by ambulance. Just past 6:20 local time, NBC Sports announced that Ware had been released from the care center, with an RWR representative confirming the 26-year-old was only experiencing “a little bit of discomfort in his ankle.”

Chase Elliott jumped into the lead after Ware’s crash, but he too became a victim of the playoff driver right-rear curse. Also through turn four, Elliott’s right rear lost pressure, slapping the No. 9 against the SAFER barrier on corner exit and destroying the right-side suspension on both ends of the car.

Chase Elliott crashes from the lead!

The regular season champion is done for the day. #NASCARPlayoffs pic.twitter.com/WOzuki3VPC

The NAPA Chevy burst into flames for good measure, ensuring Elliott would finish no better than 32nd.

Speaking to Frontstretch’s Stephen Stumpf outside the infield care center, Elliott chose not to condemn NASCAR’s lone tire supplier, saying “[Goodyear] are always the ones that take a black eye, right? Because the tire has their name on it … They’re put in a tough position to build something that can survive what we’re putting it through.”

Goodyear, it seems, agreed, directing teams to adjust tire pressure under the red flag and receiving a special exemption from NASCAR to do so.

UPDATE: NASCAR will allow teams to adjust air pressures before rolling off pit road at Texas.

This is a recommendation from Goodyear and approved by NASCAR.

Unfortunately, that didn’t address the problem, as first Chris Buescher and then Kevin Harvick also blew right-rear tires while running inside the top five — Harvick while leading, promoting Martin Truex Jr. to the top spot.

Then the same thing happened to Truex.

Speaking to NBC Sports’ Kim Coon, the 2017 champion reported “Blew a tire. Simple as that … same as everyone else has been having. Can’t wait for this year to be over … soon as we get track position, the unthinkable happens.”

As if by clockwork, not quite 35 laps later, Stenhouse’s right rear tire failed, sending the No. 47 backwards into the SAFER barrier on the exit of turn 2 and very nearly collecting Austin Cindric for good measure.

At the start of what quickly became a very long Texas afternoon, polesitter Brad Keselowski drove out to an early lead, pacing the field for 32 laps until a loose moment into turn one dropped him back to third. Under the first set of pit stops (under caution for Truex’s spin), the No. 6 was booked for speeding and sent to the back of the pack.

The first stage went from bad to worse for Joe Gibbs Racing, as only a handful of laps after Truex spun in the fourth turn, Kyle Busch slid backwards into the wall in the very same corner. The No. 18 was done for the day.

Kyle Busch crashes out of the race. #NASCAR

“I went to the high groove where I was making time in the sticky stuff,” the two-time champion said to NBC Sports from outside the infield care center. “It’s not so sticky, apparently, sometimes.”

JGR’s nightmare continued on lap 79 with Bell’s first flat tire. Confusingly, Cole Custer suffered a flat tire in a simultaneous, yet unrelated, incident. Bell was able to continue. Custer was not so fortunate.

Larson won out in a dicey four-car battle for the lead on the restart, pulling away from Hamlin, Reddick and Byron.

This battle for the lead is wild! (📺: USA) pic.twitter.com/1wx6ltu4LH

After a fender-banging duel on a restart, Larson held off Hamlin for his fourth stage win of the season.

A couple new names cycled to the front to start stage two, with first Stenhouse and then rookie Harrison Burton pacing the field. But, under caution for a second flat right rear on Bell’s No. 20, the young Burton’s time up front came to a fiery end.

Not the type of hot rod @HBurtonRacing wants to drive. pic.twitter.com/hzHaPHDHPl

Caution after caution eventually deposited Blaney in the lead, and the Team Penske driver held on to win the stage, his sixth of the season.

With Michael McDowell in position to lead the field to the start of stage three, lightning struck the area of Texas Motor Speedway, bringing the action to a close for an hour-long red flag.

From there on, Texas Motor Speedway became tire failure city.

To make a crazy night even crazier, title challengers Hamlin and Byron traded blows battling for second position on lap 262. When the caution came out for Truex’s tire failure, Byron didn’t quite slow down fast enough, sending the No. 11 sliding through the quad-oval off the bumper of the No. 24.

NASCAR judged Hamlin to have failed to maintain caution speed, separating him from Byron while the Hendrick Motorsports driver was allowed to keep second place. Needless to say, Hamlin was unhappy with the call.

"I'll give him the penalty if he comes back to me."

Denny Hamlin is livid William Byron didn't get a penalty for the incident involving both of them. #NASCARPlayoffs pic.twitter.com/7Ir629Rxm9

“I guess we can just wreck each other under caution,” said the driver of the No. 11. “I got to look but I don’t think we touched but obviously, he sent us through the infield under caution … I’ll just add it to the list of guys when I get a chance they’re gonna get it.”

"When I get a chance, they're gonna get it."@dennyhamlin says he's adding William Byron to the list. #NASCARPlayoffs pic.twitter.com/kBxKaIInXE

Byron was not quite unwilling to admit the collision had been payback. Asked by NBC’s Parker Kligerman if he’d run into Hamlin on purpose, the North Carolina native said, “I don’t know. I mean obviously, yeah,” before immediately walking it back to “I went to go show my displeasure, I didn’t mean to hit him and spin him out. There’s a ton of guys that do this, and go do something like that, I see it all the time … yeah, I’m not going to get run like that.”

A little bit lost in the chaos, Elliott and Daniel Suarez are now tied for the final transfer spot to the round of eight. Briscoe is just four points back, with Cindric behind a further seven. Bell and Bowman are 29 and 30 points back of the line, respectively, with the unpredictable races at Talladega Superspeedway and the Charlotte Motor Speedway ROVAL up next.

With the playoffs-ineligible Reddick winning this week, not even first-ranked Logano is safe. The No. 22 is just 30 points clear of the cut line.

The NASCAR Cup Series Round of 12 continues next Sunday (Oct. 2) with the YellaWood 500 at Talladega Superspeedway, airing at 2 p.m. ET on NBC.

No call for the grab assing during cautions. Second time this year I’ve seen the 11 do it. NASCAR should take a really hard line on this from here forward before something bad happens to an official, crew member or safety worker.

It’s all about who you drive for.

Ya think???? Too bad there’s no evidence. (Dripping with sarcasm)

NASCAR is in a tough spot with this one. They have to choose between angering their God (Rick Hendrick) and the real God – who is supposedly in Joe Gibbs corner. lol

Joey is glad he’s “just” 30 points above the cut line.