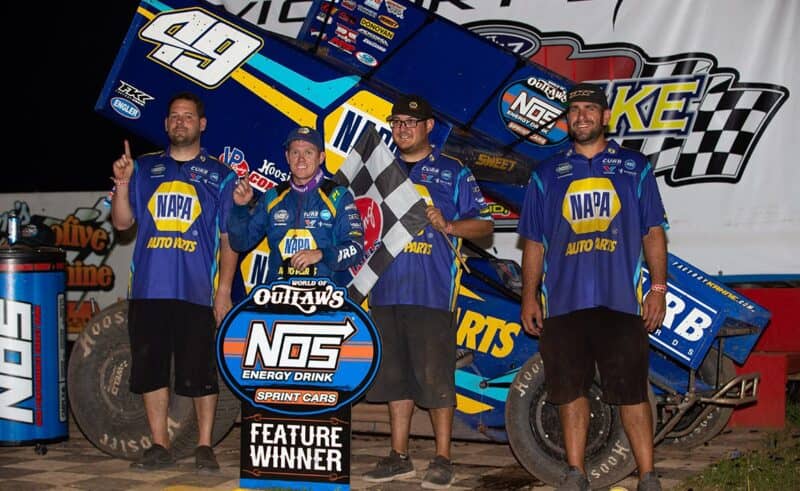 The racing at Kokomo was competitive and Jonathan Davenport failed to score either of the two feature wins, actually being bested on track by Tim McCreadie in Tuesday’s $40,000-to-win finale. In that regard, the removal of the droop rule certainly seemed successful in making late model racing more competitive.

But as discussed in this feature last week, Kokomo is hardly a suitable place to determine whether the change in droop rule was actually responsible for anything. After all, Kokomo is a bullring that is different from the tracks where Davenport has been dominant all season long, and further is a track that has spotty scheduling with late models, meaning for most teams the notebook at Kokomo is much thinner than other venues.

Anthony Burroughs, the crew chief for Ricky Thornton Jr.’s late model team, also made a reasonable observation to DirtonDirt during the week that major late model races at Fairbury, Davenport and I-80 this summer all saw competitive racing despite being run with the droop rule in effect.

In short, nothing to see here. When the tour hits Las Vegas next month, with the entirety of the nation’s top drivers likely to be present and racing on a half-mile, will be a true test as to whether the droop rule needs to be dropped come 2023.

Though it’s statistically unlikely at this point, World of Outlaws late model regular Tanner English deserves a ton of credit for putting Dennis Erb Jr. under some form of pressure for the series title, a chase that seemed all but academic this spring once three-time defending champion Brandon Sheppard switched to the Lucas Oil Late Model Dirt Series tour. Despite all that success, English will not be returning to the Riggs Motorsports team for 2023.

As they head to @boyds_speedway for @WoOLateModels action, owner Scott Riggs & driver Tanner English announce they will soon part ways.

The split was reported by DirtonDirt to be amicable, but it’s surprising to see, given that English is in the best form he’s been in during his tenure with the race team. A sign perhaps that Jason or Jack Riggs, both of whom have made spot starts in the team’s super late models the last few years, are ready to drive more frequently?

The World of Outlaws sprint car tour also has now seen its tour become an eventuality, with three-time defending champion Brad Sweet scoring a massive blow to the rest of the field with a flag-to-flag win at Sharon Speedway Saturday night that gave him a 96-point lead with less than 10 races left in the season.

While last year’s campaign saw Sweet back into the championship, struggling down the stretch while David Gravel rolled off wins, this year has been the opposite. Sweet led the points with consistency early in the year as Sheldon Haudenschild and Carson Macedo have piled up 20 race wins in 2022. But through the summer, Sweet now sits on a respectable five feature wins, with a fourth title now all but assured.

4. Nick Hoffman no worse for wear

Ordinarily, seeing Nick Hoffman win a modified race is enough to put me to sleep, as the North Carolina driver has won more than 60 features the last two years while turning the Hell Tour into an exercise each summer. But seeing Hoffman score the win at Peoria this weekend in his first race back from a devastating hauler crash was a very welcome, feel-good story.

Hoffman’s a supremely talented driver and one of the best in dirt racing when it comes to social media presence. Seeing him not miss a beat in his return to competition makes dirt racing as a whole better. Now ,about getting this man a full-time late model ride to make modified racing competitive again? Paging Scott Riggs?!

5. The downside of having no catchfences

There’s no getting around it, walls and catchfences tear racecars up when they hit them. But they also keep racecars on the racing surface and in a defined area. That defined area bit is important, as Mario Clouser demonstrated at Paragon Speedway over the weekend.

The footage is grainy, but one look at the Facebook thread demonstrated that Clouser’s car landed on another racecar after flying off the track (it was unclear whether that car was in staging for the next race or in a work area).

Either way, that’s a major problem. And it’s exacerbated at any track that run wingless sprint cars, which are the closest thing to unguided missiles raced at any dirt track in America. Maybe catchfences aren’t the answer, as impact with solid objects could be just as dangerous as Clouser taking flight. Plus, fences are awful expensive.

But maybe the staging area does need to be rethought? The point being, if racing wingless sprint cars, think about the worst case scenario, then double it.

Those that follow the Frontstretch Twitter feed know that I spent Saturday night with our Youtube guru Jared Haas at I-30 Speedway in Little Rock, Ark., having made a 15-hour drive over the weekend to catch what is expected to be the penultimate race for the track before it is closed to make way for a Copart facility.

All I can say is what a damn shame. I-30’s racing surface proved impeccable on the night, with two of the four features on the night featuring at least one three-wide battle for the lead, a program that had no intermission or delays between events and a reasonably-priced concession stand (a cheeseburger, corn dog, (very) large-sized Frito pie and a 20-ounce soda cost what chicken tenders do at Bristol).

This is a gem of a track that the sport will be less without having. Folks, if it’s within your means and ability, please support your local track.