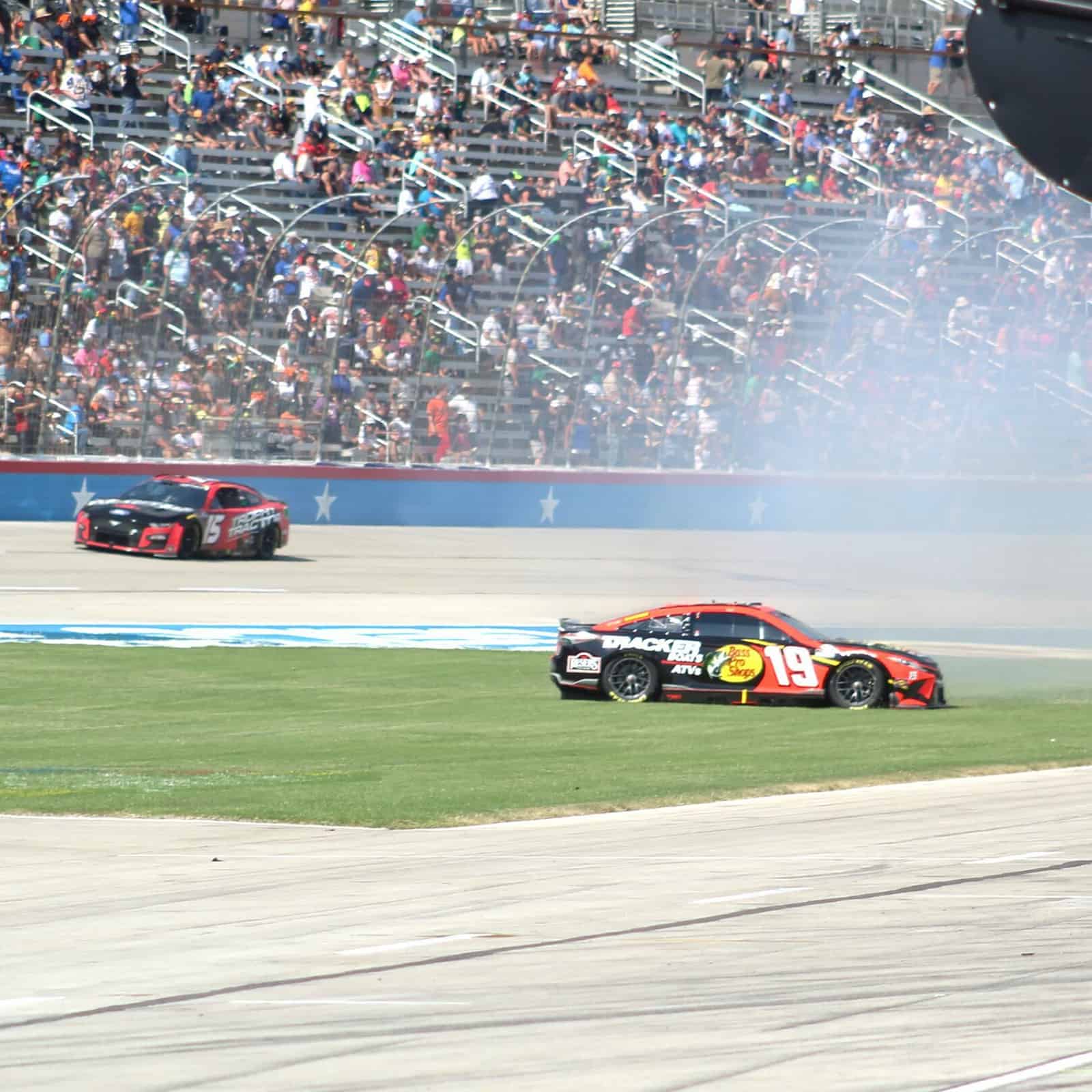 FORT WORTH, Texas — On Saturday (Sept. 24), Kyle Larson said that in a hypothetical Texas Motor Speedway repave, they should demolish the track and start from scratch.

That response set the tone for the NASCAR Cup Series race Sunday (Sept. 25). Cody Ware had a frightening crash into the pit wall, three different drivers crashed out of the lead from blown tires, and the race became a marathon of survival in the closing laps. There were 16 cautions (a Cup record at Texas) for 91 laps and a run time of four hours, 21 minutes and 53 seconds. With an average speed of 114.784 mph, Sunday’s race shattered the previous low speed of 125.111 mph that was set at the inaugural race in 1997.

Tyler Reddick scored the win after leading a race-high 70 laps and joined Chase Elliott as the only drivers to win at least three races in the 2022 season. While Reddick and the No. 8 team were satisfied with another victory, just about everyone else in the field left with frustration and questions.

Christopher Bell quickly moved through the field in the first half of the race, but he suffered two flat tires, the second of which ended his day on lap 136.

“No, I had no idea [of a warning],” Bell said. “I mean, to have two right rears go in the first half of the race is very, very strange. I don’t know. Very disappointing day and going to be in a deep [playoff] hole now.”

It was a rough start to the Round of 16 for Elliott, but he showed muscle last weekend at Bristol Motor Speedway after finishing second. He also looked to be one of the fastest cars in the field at Texas as he led 44 of the first 183 laps. But after exiting turn 4 on lap 184 as the leader, Elliott had a tire go down and he crashed into the outside wall. The car came to rest in the tri-oval, and Elliott quickly bailed out after the No. 9 car was set ablaze.

“[Goodyear] is always the one to take a black eye, right?” Elliott said. “The tire has their name on it, but they’re put in a tough position to build something that can survive what we’re putting it through.

“Whatever was coming apart, when it started coming apart, I was already out of shape and at that point I was on corner exit, so it was just a bad place for it.”

The race was paused for rain, and drivers then had to face a track surface that had significantly cooled off from the 95-degree weather in the afternoon. The race resumed after a brief delay, and the caution came out once again on lap 242 after Chris Buescher lost a tire while running third. During that caution, Kevin Harvick, Martin Truex Jr. and about a dozen others elected to stay out.

It was a battle between Harvick and Truex after the restart, but after just nine laps out front, Harvick lost a rear and backed into the turn 3 wall. He finished the race 19th, but he was not pleased with how the race went down.

36 lead changes… didn’t realize we blew that many tires. https://t.co/kuX7DuVCJh

With Harvick knocked out of the lead, Truex took over the top spot. But just 15 laps later, Truex became the third driver to have a flat tire while leading. Truex lost control in roughly the same spot that Harvick did, and the damage was terminal for the No. 19 car.

“We had no problems [with tires] all day, and then all of a sudden we took one tire off and James [Small] said it wouldn’t have made one more lap,” Truex said. “I have no idea why, we’ve run more laps on tires than this one, but this thing I’ve never seen anything look like this in my whole life. Then we go racing and put more tires on and it’s fine, then all of a sudden, we’re leading, and poof, it blows out. I don’t even know what to say between crappy parts and tires exploding and all the bulls–t we’re dealing with. It’s a joke.”

On the restart after Harvick’s crash, Denny Hamlin and William Byron were racing in the top five. Byron made contact with the wall after getting crowded by Hamlin, and he showed his displeasure by spinning Hamlin through the tri-oval grass when the caution came out for Truex.

Let’s just say that the two weren’t happy campers after the race.

“It seems like a guy runs into you it’s fair game, right?” Byron said. “I didn’t mean to spin him out under caution or anything like that. I was just frustrated and wanted to show some displeasure. It is what it is, and we’ll move on. But yeah, just, not going to take that kind of stuff.”

“We got tight off of turn 2 and we never made contact,” Hamlin said. “Slowed both of our momentum and that was it.

“I’m not really sure [about going forward with Byron], we’re just going to have to race him hard.”

Hamlin was also frustrated with NASCAR’s response and questioned why Byron was not penalized for the move after the race.

They missed it? What a f*#k joke. It played on the screen 5 times during caution.

After two further cautions, Reddick held off Joey Logano in a 24-lap shootout to score his first Cup Series win on an oval. And while discussing the final green flag run with Reddick, Logano had a quip that summarized much of the Cup Series’ Sunday in Texas.

If Hamlin thinks he’s the only one keeping score, then I expect he’s laboring under a misconception. His mouth can get him in as much trouble as his driving, & that’s saying something.
Had the situation been reversed, & he’d have been forced into the wall he’d have been squealing like a pig under a gate.
When Texas Speedway was new, & was having water problems, they put out shirts saying, “shut up & drive.” That advice could well be applied to both drivers in this dispute. I’ve always heard that honesty is the best policy. But in Byron’s case, his honesty might come back to bite him.
As for Hamlin, I’m sure the whiny little twerp has some fans. I’m just not sure why?

Agree for sure. Work Hamlin into a hate filled choke.

As a fan, this race had it all. If I’m gonna tune in for almost six hours I wanna see this much action!