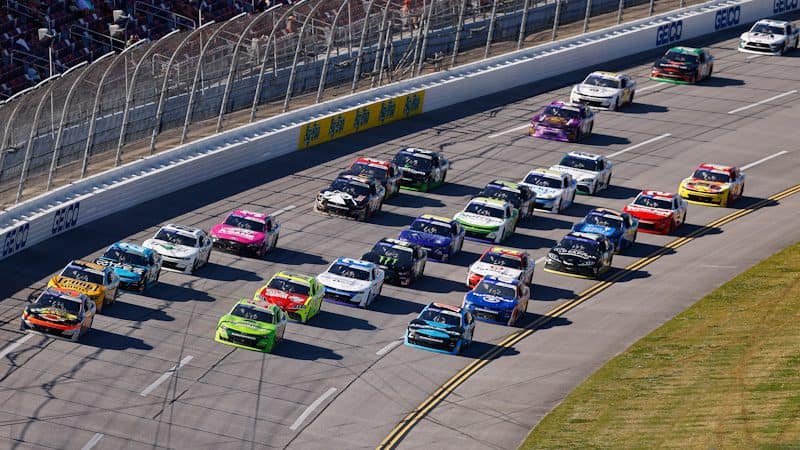 The NASCAR Xfinity Series heads to Talladega Superspeedway for the second race of the Round of 12.

Blaine Perkins returns to the No. 02 AUTOParkit chevrolet for Our Motorsports. Parker Retzlaff was in the ride at Texas Motor Speedway last weekend.

JD Motorsports will have Ryan Vargas back in the No. 6 Reddit NASCAR Chevrolet. Brennan Poole made his JDM debut at Texas.

Joe Nemechek will attempt to make his season debut with Sam Hunt Racing in the No. 24 Fleetwing Toyota. Nemechek attempted to qualify the car at Daytona International Speedway in August, but rain canceled qualifying and sent him home.

SHR will also have Derek Griffith in its No. 26 Toyota. Griffith last competed at Kansas Speedway three races ago.

Howie DiSavino III will attempt to make his fourth start of the season with Alpha Prime Racing. Disavino will drive the No. 44 Travis Mills Foundation Chevrolet. Caesar Bacarella will be in the team’s No. 45 Chevrolet for the first time since the Daytona summer race.

Parker Kilgerman looks to make his third Xfinity start of the year, this time with Big Machine Racing Team in the No. 48 Chevrolet. Kligerman has competed in two races this season with Emerling-Gase Motorsports.

Ronnie Bassett Jr. seeks to qualify the No. 77 Chevrolet for Bassett Racing. Bassett has made two starts this season, while failing to qualify for three other races.

BJ McLeod returns to the No. 78 Chevrolet for BJ McLeod Motorsports. McLeod last raced at Bristol Motor Speedway on Sept. 17.