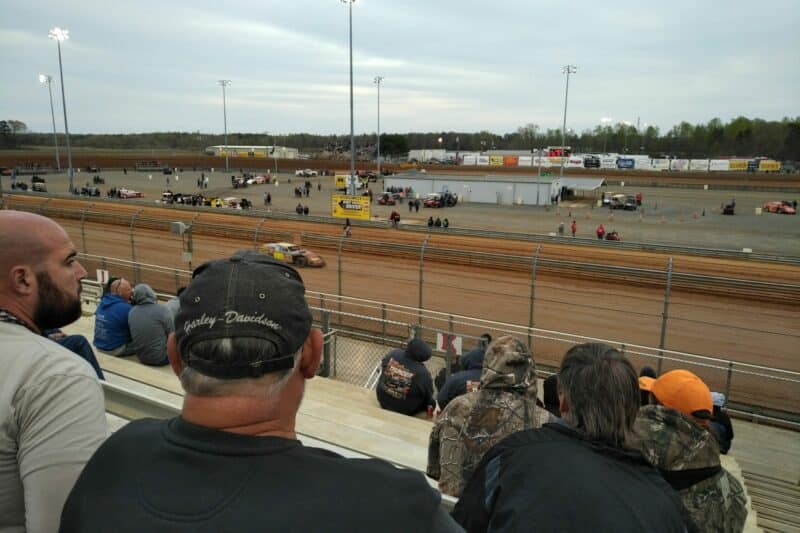 Zack Dohm appeared to have the FASTRAK World Championship under control when he prevailed after laps of sustained pressure on Henry Hornsby III, taking the lead with 13 to go in the feature. However, come lap 58 Dohm got stuck under a lapped car in turn 2, opening the door for Tyler Bare to pounce with a perfectly executed diamond move through the corner to score the richest win of his racing career.

Bare was openly emotional in victory lane, as the win came in a late model sporting a throwback paint scheme tribute to his grandfather.

It marked the end to an eventful FASTRAK World Championship feature that went off the rails on lap 16, when race leader Benji Hicks spun in turn 4 after overdriving the corner smack into a lapped car. That handed the lead to Hornsby, who was in front of trouble when the Big One struck on the ensuing restart, collecting seven cars in turn 2 after Tyler Emory went spinning.

Hornsby would lead the next 30 circuits of the race, a feature which included a scheduled pit stop after 30 laps were completed. Hornsby’s No. 39 did lose pace approaching lap 40, which allowed Dohm and Bare to close for their eventual battle up front.

It was a cool moment to see Bare get congratulated on the cool-down lap by fellow competitors Dohm and Logan Roberson, and it was well-deserved considering that Dohm and Bare raced clean to decide what will likely be the richest shot at a win either driver will have in 2022.

Here we are in victory lane years ago at @vamotorspeedway

Now look at us once again on the podium with @FASTRAK_Racing at the world championship!

Crate late models require drivers to essentially run wide open at all times to keep momentum up, which in turn often turns crate races into demolition derbies. Fortunately these young guns did no such thing to a race dubbed “the biggest pro late model race in the universe.”

Beaverdam, Va.’s Russell Erwin was the FASTRAK World Championship hard charger of the night, improving from 23rd to sixth over the course of 60 laps.

Mason Zeigler may be a super late model regular, but arguably no driver made more noise at VMS Saturday night. Zeigler had to score the win in the non-qualifiers race just to start the feature, then charged from 27th into the top 10 by the time the scheduled halfway caution flew. At race’s end, Zeigler still had a positive result, finishing 15th on the night, a result that earned him $200 more than he would have if he had opted to take the $1,500 purse for winning the non-qualifiers race.

Zeigler’s charge to the front of the field was derailed after the scheduled pit stop because his team changed more than just their right-rear tire. As such, the rules violation sent Zeigler back to the tail of the field for the start of the second segment, which was too deep a hole for the Pennsylvanian to recover from. Missed opportunity for sure.

Maybe it was just a precursor of the troubles the NASCAR Cup Series leaders faced at Texas, but Hicks’s lap 16 spin after contact with a lapped car had all the looks of a self-inflicted error. It proved costly, as Hicks finished 20th in the feature.

So about that Kyle Hardy save. Yes, it was a spectacular piece of driving by the former Winchester Speedway regular and a minor miracle that the field didn’t destroy itself trying to avoid the incident on lap 8.

It was also a spectacular failure that the caution flag wasn’t thrown immediately for Hardy’s spin. Yes, such a stance is counter to my NASCAR days where I tore that series apart for unnecessary yellows, but this is a half-mile oval, not a superspeedway, and Hardy was at one point turned driver’s side towards oncoming traffic in a field of racecars without spotter communication. The miracle of the field not destroying itself on lap 8 should have never come to pass in the first place.

Maybe it was because I was on the road and had to watch the race on my laptop, but the audio for the Flo Racing stream felt really weird in the sense that the cars themselves were pretty much inaudible, as if the broadcast booth was piped in over silent video. Believe it or not yes, crate late models do make noise.

The FASTRAK World Championship isn’t the only dirt race out there to adopt such a title, but I have a real issue with the concept of a “World Championship” race, and not just because there’s no other place in the world that races crate late models.

Look at the field of drivers that contested Saturday’s program. Two of the most newsworthy drivers were Zeigler, a super late model regular making what he recalled as his second-ever start in a crate late model, and Jeremy Steele, a freaking 12-year-old kick who won the second B-main race in only his fourth career late model start. What exactly would qualify either of those resumes for a shot at a “World Championship?”

Let’s explore that Steele story a little bit further, because it’s just that, a story. I’m going to try to give the FASTRAK announcers the benefit of the doubt that maybe they were referring to Steele making his fourth FASTRAK-sanctioned late model start? Because Twitter is right on this one… Steele has scored four wins in late model competition this year across more than 20 starts.

@FASTRAK_Racing , unfortunately the story line of Jeremy Steele being 12 years old & his 4th pro latemodel race is incorrect… he’s a little older than 12 and has few more races than 4 under his belt . He’s probably won 4 or more already in his few years in crates

Scheduled post. I HATE scheduled pit stops in a race, as it completely nullifies the point of running a longer feature. However, I will concede that offering a halftime leader bonus, and one that’s of value to crate late model drivers ($1,000 is more than most weekly tracks pay to win a crate feature), makes the race format a little easier to stomach.

But about that pit stop break. The “grid walk” that the broadcast crew at VMS employed during the break was cringe-worthy. Broadcasting other teams’ tire strategies over an open mic as active work was still being done on the cars. The track broadcast booth bellowing over everyone seemingly every 60 seconds to update teams on the pit clock. Interviewers interrupting each other (loudly) to award a plaque for the halftime leader bonus. Trying to interview drivers that were actively changing their own tires. What a mess. Dirt racing and pit stops don’t mix.

The finish a driver would have to post to score more winnings than keeping the check for a non-qualifiers feature win.

Money paid to Hornsby for leading the FASTRAK World Championship at halfway.

What it Rated (on a scale of one to six cans with one a stinker and a six-pack an instant classic): We’ll give the FASTRAK World Championship four Free Verse IPAs from Virginia Beer Company. Keeping this event to a single-class meant that the programs run a reasonable amount of time and the excellent finish between Dohm and Bare helped gloss over some of the streaming shortcomings and the restrictor-plate nature of crate late model racing.

Up Next: Thinkin’ Dirty rejoins the World of Outlaws sprint car tour for the annual $75,000-to-win National Open at the Williams Grove Speedway. Coverage of Saturday night’s A-main can be found on DirtVision.