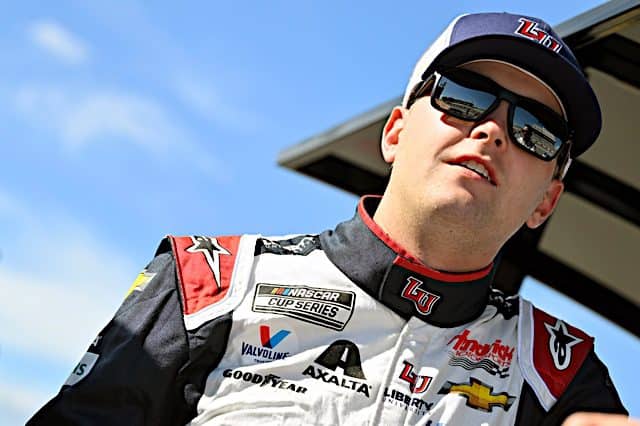 In a NASCAR Cup Series playoff field that remains tight through four races, William Byron has the opportunity to do something he’s never done before: reach the third round of the postseason.

Since the playoffs began, Byron and the No. 24 team have recaptured their form from early in the season. That was when he became the first driver in 2022 to win multiple points-paying races and climbed as high as second in overall points. But that hot start gave way to a sluggish summer. In the 18 races after his win at Martinsville Speedway, all the way to the end of the regular season, Byron only had one top-10 finish. The No. 24 team tumbled down the points standings, finally ending the regular season 10th overall. Byron’s participation in the playoffs was never in doubt, but his long summer slump tanked his stock as a potential championship contender.

Yet the minute the playoffs began, Byron flipped the switch once more. At Darlington Raceway, the No. 24 team won the first stage and rolled to an eighth-place finish. A sixth-place finish at Kansas Speedway followed that, with a third place at Bristol Motor Speedway capping off a strong first round for Byron.

Now Byron is one of 12 drivers left standing in the championship hunt. Of those remaining playoff drivers, six have participated in the third round at least once. Four of the other six drivers are in the playoffs for the very first time. Byron and Christopher Bell are the only drivers who have previous playoff experience but have never advanced beyond the second round.

Bell, who is in the playoffs for the second time, had an even better first round than Byron. Three straight top-five finishes to begin the playoffs forced the field to take notice of the No. 20. However, Bell crashed out of last weekend’s race at Texas Motor Speedway. He left that race 29 points below the cut line, demonstrating how quickly fortunes can change in NASCAR.

Byron soldiered through the race at Texas and ultimately finished seventh. He managed to avoid the tire issues that knocked several contenders out of the running. But Byron did not escape Texas without some controversy. Late in the race, while running in the top five, he and Denny Hamlin were battling for position when Hamlin washed up into the No. 24 on the exit of turn 2. The contact forced Byron into the wall, costing him the spot. A short time later, under caution on lap 269, Byron rammed Hamlin in the back bumper coming onto the frontstretch, causing the No. 11 to spin through the infield. Hamlin then caught back up to Byron and, still under caution, hit the No. 24 in the rear gong down the backstretch, though stopping short of spinning him out.

The incident on the frontstretch clearly incensed Hamlin, especially since NASCAR chose not to penalize Byron for spinning another driver under yellow. Hamlin implied over his team’s radio that he would go after the No. 24 once he caught up to him, but both drivers completed the race without further incident.

So, Byron now stands third in points, 17 above the cut line heading to Talladega Superspeedway this weekend. That puts him in better shape than most of the playoff drivers, but it shouldn’t be enough to make the No. 24 team feel comfortable. That’s because the last two times Byron made it this far in the playoffs, bad results at Talladega effectively ended his championship hopes.

In 2019, Byron’s first time in the playoffs, he came to Talladega as the bubble driver, only above the cut line by virtue of a tiebreaker. Things started off well with Byron winning stage one and collecting a few more points in stage two. But on lap 163, while fighting for the lead, a push gone wrong from Kurt Busch sent Byron spinning in front of the field and set off a huge crash. Byron ended the day in 33rd place, and not even a top five one week later could save him from elimination.

The 2021 Talladega playoff race went even worse for Byron. First, he bumped Justin Allgaier into a spin on lap 56 that wrecked Hendrick Motorsports teammate Kyle Larson. Then, Byron got collected in the multi-car crash on lap 116, the one that brought out the final caution just before the race-ending rainstorm. Byron left Talladega with a 36th-place finish and a 44-point deficit to the cut line. Needing a win to stay alive in the playoffs, Byron ran competitively at the Charlotte Motor Speedway ROVAL the following week, but slid off course while racing in the top five with two laps to go. The points lost at Talladega proved to be too much.

The one playoff Talladega race where Byron did get a top five was in 2020. Unfortunately for him, he had already been eliminated in the first round of the postseason that year. As such, the later rounds of the playoffs have remained elusive for Byron.

This weekend will bring another opportunity for Byron to conquer the round of 12. With previous wins at Daytona International Speedway and the recently reconfigured Atlanta Motor Speedway, Byron has shown a knack for pack racing. But success in Talladega’s playoff race depends so much on being in the right place at the right time. If Byron gets out of Talladega with a fifth consecutive top 10, he is likely heading to the third round of the playoffs for the first time. Otherwise, his playoff breakout year could end in round two disappointment once again.