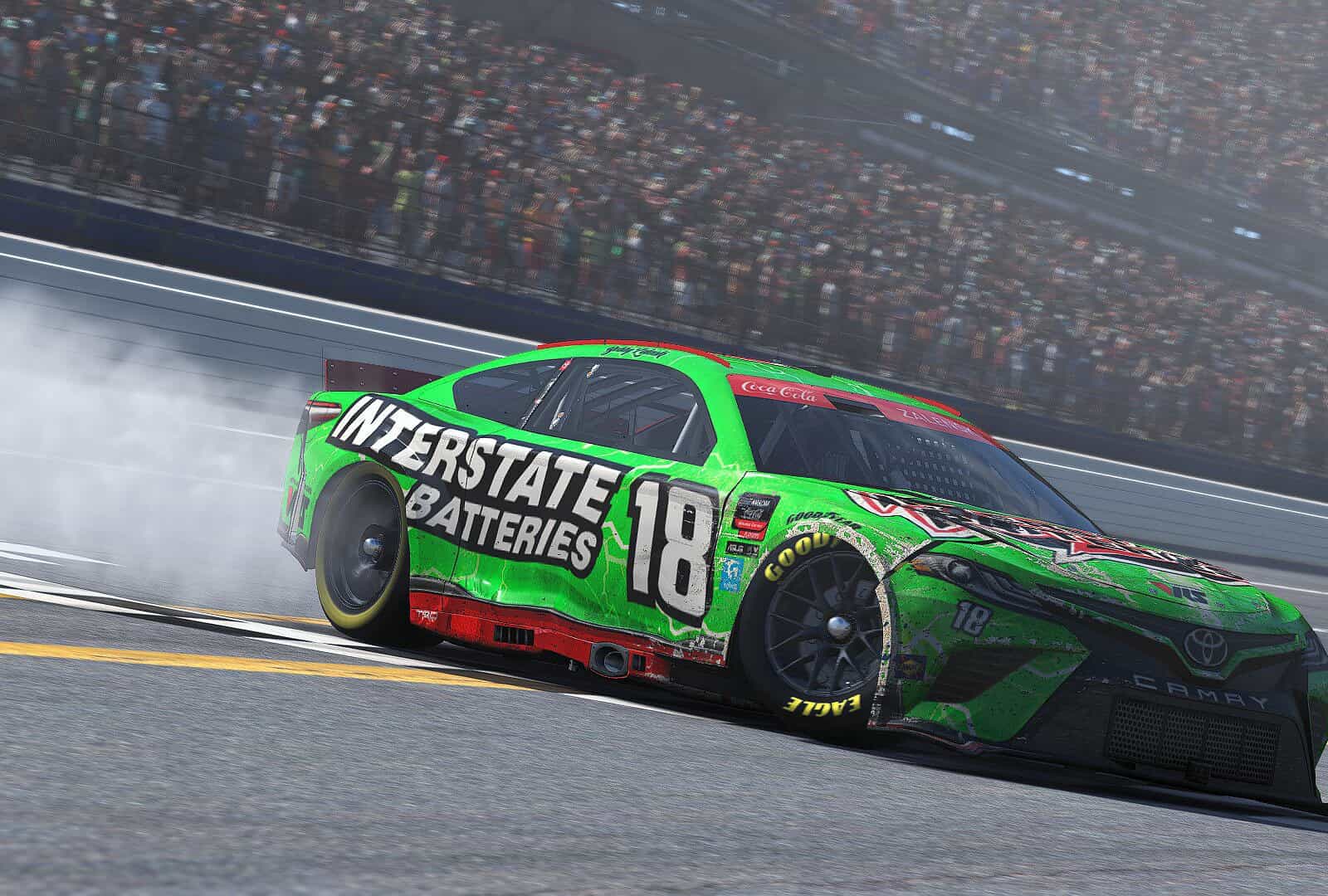 Round 16 of the 2022 eNASCAR Coca-Cola iRacing Series season at Talladega Superspeedway was won by Bobby Zalenski after an absolutely wild finish between himself, Collin Bowden and Casey Kirwan.

With only two races to go after Tuesday night’s (Sept. 27) event, the intensity elevated with what is on the line. The win clinched Zalenski his spot in the Championship 4.

“I guess we played that race to perfection at the end of the day,” Zalenski said. “I was really hyped to win in that fashion — yeah!”

Zalenski was nowhere to be seen most of the race and almost came out of the woodwork in overtime to take the win. Running third coming to the checkered flag, he overtook Kirwan and Bowden as they came to the line in what was nearly a photo finish.

Not much action happened in the first half of the event, as pit stops began around halfway at lap 35. Most leaders came down, which then set up about a 30-lap shootout by the time everything cycled around.

Some of the best superspeedway racers on the iRacing service, such as Kirwan, Michael Guest and Malik Ray, were at the front of the field near the end. Kirwan didn’t grab the win, but he set himself up for a good finish, eventually coming home third. That helps his chances to race his way into the championship race at Phoenix Raceway.

As always, the big wreck usually is a factor when it comes to these superspeedway races. On several occasions, it struck on Tuesday night. The first one was not as big of a wreck as most of these incidents usually are, but most cars who were caught up had their nights end. The last one, which was the worst one, sent at least 10 cars sliding out of control and ultimately created overtime.

The most notable drivers caught up in wrecks tonight were playoff contenders Femi Olatunbosun, Nick Ottinger and Mitchell deJong. All three now have an uphill climb to try and make their way into the Championship 4.

Super-fast @LogitechG Chevy tonight! I really can't thank @LogitechGesport for being able to send out the Pro Racing Wheel & Pedals to me. Truly, it gave me great confidence to make moves against other drivers in super intense situations.

The points battle has proven to be a tight one, as nobody is truly safe when it comes to making the championship race at Phoenix next month. Points leader Steven Wilson held a slim one-point advantage over Garrett Lowe coming into the race Tuesday. After the race, Wilson finds himself barely hanging onto a chance at a top four spot in points after being involved in a wreck with seven laps to go. He is now five points back of fourth going into next week.

In the end, the overtime period was fairly clean and ended in a somewhat-surprising Zalenski win.

eNASCAR veteran Logan Clampitt announced on Monday, Sept. 26, that he would be stepping away from the series at the conclusion of the 2022 season. While his year has not gone to plan, Clampitt has been a dedicated competitor in the series for many years, scoring several wins and a 2021 Championship 4 berth.

As we approach the final three races of the eNASCAR Coca-Cola iRacing season, I want to thank those who have supported me through the years in my professional sim racing chapter. It's been a great one and I'm so very thankful for it❤️
. . pic.twitter.com/hYVDtCLtyI

The Round of 10 in the eNASCAR Coca-Cola iRacing Series playoffs heads to the virtual Homestead-Miami Speedway next for the penultimate event of the season on Oct. 11. The coverage begins with Countdown to Green at 8:30 p.m. ET and the race to follow at 9 p.m. It will be broadcast live on eNASCAR.com/live, YouTube.com/iRacing and Twitch.tv/iRacing.