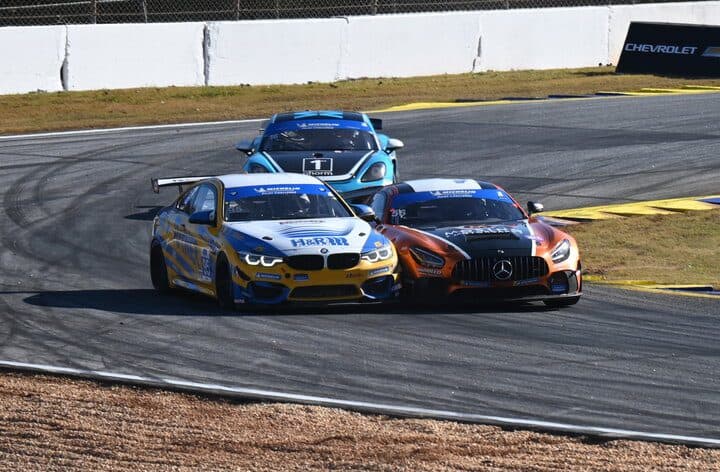 In Grand Sport, there are 25 teams entered.  Accelerated Performance is making their Pilot Challenge debut with the duo of Moisey Uretsky and Justin Piscitell.  They are teammates in Pirelli GT4 America SprintX.  Uretsky won the GT4 class in GT America Race No. 1 at Sebring just last weekend.

Piscitelli is a veteran of Pilot Challenge that has previous starts in Grand Sport, TCR and the now defunct Street Tuner classes.  Meanwhile, Uretsky will be making his series debut.

Local racer Casey Carden is entered in the Automatic Racing No. 09 Aston Martin alongside Dr. Ramin Abdolvahabi.  At CarBahn Motorsports with Peregrine Racing, Tom Dyer is back in the No. 93 Porsche alongside Tyler McQuarrie.

VOLT Racing’s Alan Brynjolfsson and Trent Hindman have a 160-point lead over Murillo Racing’s Eric Foss.  As a result, they will claim the championship this weekend if they can finish ninth or better.  Foss has the tiebreaker since he has three victories to Brynjolfsson and Hindman’s two.

In TCR, there are 14 teams entered.  LA Honda World Racing is back with their Honda Civic Type-R TCR.  Ryan Eversley and Mat Pombo will drive.

A new team, Deily Motorsports, has entered a Hyundai Veloster N TCR.  Jacob Deily and Peyton Long are listed as the drivers.