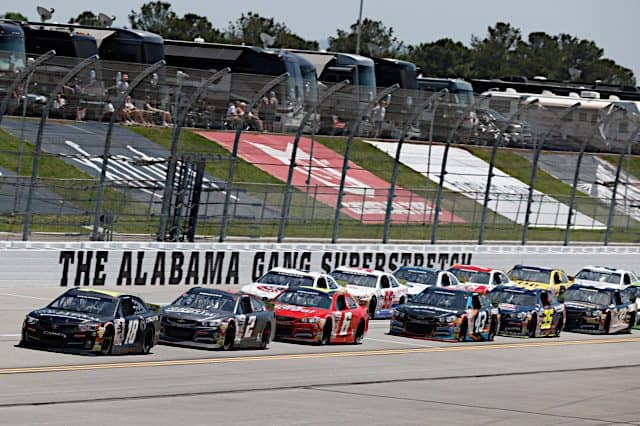 In case you didn’t see the Andy’s Frozen Custard 300 at Texas Motor Speedway on Saturday (Sept. 24), it did not fare well for some in the 2022 NASCAR Xfinity Series playoffs.

With Talladega Superspeedway and the Charlotte Motor Speedway ROVAL as the second and third races in the opening round, the strategy for the former will vary for some entering Sparks 300 on Saturday, Oct. 1.

TALLADEGA MATTERS, BUT IT DOESN’T

The “duh” paragraph in this column is that Noah Gragson doesn’t have to worry about Talladega because he won the opening race of the playoffs at Texas, securing a ticket to the Round of 8. All Talladega can award Gragson is additional playoff points for the Round of 8 to help him advance to the Championship 4.

Seven playoff points are up for grabs for all 12 playoff drivers. Gragson already has 48, but seven more gives him even more of a cushion to the cut line.

He’ll likely go all-out at Talladega. Though team owner Dale Earnhardt Jr. would probably like for him to hang back in the pack through the first two stages, Gragson will be up front. Hanging back and staying safe isn’t his style.

AJ Allmendinger and Ty Gibbs are 47 and 46 points above the cutoff line, respectively. Their main objectives will be to finish and maybe come away with a top 10 at the end of the day — top 20s at the minimum. Maintaining a cushion of 40-plus points is ideal for Allmendinger and Gibbs.

If both arrive at the ROVAL with a 40-point spread to the cutoff, that will allow them to be less reliant on stage points to boost their chances of a points advancement into the Round of 8.

Talladega is simply a stay-out-of-trouble-and-finish scenario for them.

STAGE POINTS WOULD BE NICE

The next three drivers in the standings are Austin Hill, Josh Berry and Justin Allgaier. They are fourth, fifth and sixth in the points and are 30, 24 and 20 points above the playoff cutoff, respectively.

Despite the horrible finish due to crashing out, Allgaier only lost eight points to the cutoff, entering the race 28 points ahead of ninth. Berry extended his lead from 17 points to 24, as did Hill, who jumped from 11 to 30 points ahead of the cut line.

Still, 30 points aren’t enough to be confident enough to skate through the race with the hopes of finishing strong. What if a driver below them wins? The potential for being knocked down the standings and any ground above the cutoff line can be shrunk significantly. Hill, Berry and Allgaier may want to gauge what other playoff drivers are doing before plotting their race.

It might be advisable to lay back in the first stage to wait and see if a big crash happens as others chase the stage points. It may be challenging to pass up, but that is the game and corresponding rules NASCAR has set up for teams and drivers to play. By collecting additional playoff points than their competitors and having a “good enough” points finish at Texas, Hill, Berry and Allgaier are allowed to be conservative.

See also
Dropping the Hammer: Put Texas Motor Speedway Out of Its Misery

If the top 10 wipe themselves out of the race, that’s 10 free positions and opens the door for an easier path to victory in both stage two and the race win. If no one crashes in the first stage and playoff drivers below them in points collect stage points, that is a risk a team takes.

LET’S NOT PANIC (YET) BUT LET’S COLLECT STAGE POINTS

If your name is Sam Mayer, Ryan Sieg, Riley Herbst, Daniel Hemric or even Brandon Jones, it’s time to wear your big boy pants and go stage racing. Mayer and Sieg are above the cut line by a single point over Herbst. Hemric is eight points below the cutline with Jones an even more distant 13.

These guys need stage points, and they need them fast. That cutoff line is lingering in their periphery, and each should consider the Drive for the Cure 250 at the Charlotte ROVAL to be won by Allmendinger already. For crying out loud, he’s won the past three in a row. These drivers can’t have a poor day, not even a mediocre day at Talladega, and expect to win at the ROVAL. No way, no how. The ROVAL is a wild card, and Allmendinger holds the magical sequence of UNO cards to defeat any card placed in front of him.

And remember that crash I mentioned within the top 10, and that is why Hill, Berry and Allgaier should hang around near the rear in the first stage to avoid it? Well, it will probably be caused by these five drivers on the cut-line fringe.

Every point matters, and history shows that rash decisions have been made for far less. Someone will throw a block in front of a charging driver, and chaos will ensue. But these five drivers must be in the middle of it. There’s no “playing it safe” mode for them.

TALLADEGA IS A MUST-WIN

Aside from Gragson’s strategy, if any, at Talladega, this driver has the most straightforward strategy in the entire playoff field. Jeremy Clements suffered an ignition failure 79 laps into Saturday’s race at Texas and finished 36th, scoring one measly point. He sits 29 points below the cutoff.

While Clements doesn’t have a horrible record at the ROVAL, he still hasn’t scored a top 10. For these reasons, Clements is in a must-win situation at Talladega. He and his team should consider Talladega the final race in this round of the playoffs and accept they have been mathematically eliminated via points.

Neither of those two statements are accurate, but the mindset must be clear for Clements: win at all costs.

The Round of 12 in the NASCAR Xfinity Series Playoffs is a triple dose of wild card races. Talladega is the wildest of them all. Survive, and you’re chances of keeping a championship hope alive remain bright. Falter, and the flame may be prematurely extinguished.

I bet many in the Xfinity garage are happy to see Talladega omitted from the 2023 playoffs. For now, 300 miles of puckered-up, breathtaking playoff action at Talladega is right around the corner. Choose your strategy wisely.