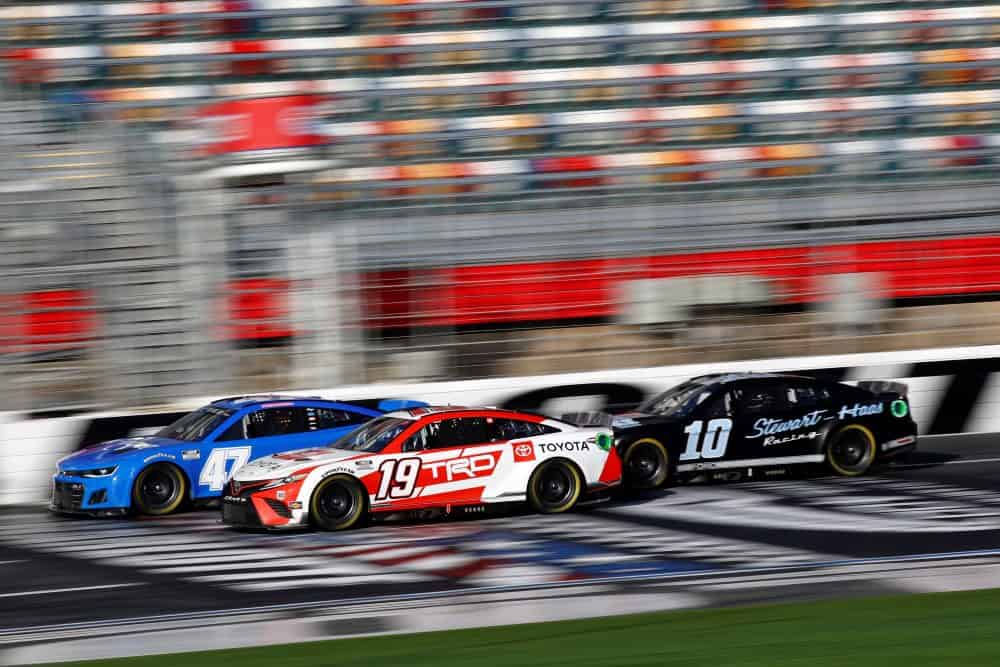 Why can’t [NASCAR] let the teams fix the flaws with the Next Gen car? They could fix it much quicker than NASCAR could. – Christian Bennett, YouTube

After back-to-back weekends at Bristol Motor Speedway and Texas Motor Speedway that saw tire woes dominate the headlines, the handful of solo voices asking for changes to the Next Gen car has turned into a full-fledged chorus.

There are serious problems. The safety is a problem, the reliability is a problem and the tires are a problem. But having the teams fix it … to paraphrase the great Jeff Goldblum: “You’re so preoccupied with whether or not NASCAR could, you won’t stop to think if they should!”

With all the changes we’ve seen between the sixth- and seventh-generation racecars, from 18-inch wheels, center-lock lugs, five-speed transaxles, independent rear suspension and more (diffusers, forward numbers, etc.), I would argue the single most significant change has nothing to do with the cars themselves and everything to do with the way they are built.

Single-source suppliers is the buzzword of the day. If you ask Kyle Busch, they’re “bought at Walmart.” If you ask Kevin Harvick …

If flames are your game, add a crappy-ass parts shirt to your cart! 🔗in bio. pic.twitter.com/duh2EAwDKi

While spec-chassis NASCAR brings to a close 70 years of custom-fabricated racing machines, one could argue it calls back 71 years to the inaugural season of Strictly Stock competition, where in the very first race, Glen Dunaway’s Ford was disqualified for having an illegally modified suspension, awarding the victory to runner-up Jim Roper and his Lincoln. Welcome to a brave new world, same as the old.

While independent rear suspensions, electronic fuel injection and aluminum alloy wheels do make Next Gen Cup cars resemble contemporary high-performance street cars a lot closer than the old four-speed, live-axle monsters did, I wouldn’t go so far as to claim that we’ve returned to Strictly Stock.

I will, however, point to IndyCar as proof of concept for NASCAR’s new variation on manufacturer-supported spec racing. The NTT IndyCar Series has been using a single chassis supplier since 2009, and the spec Dallara chassis regularly produces close racing, upset winners and, most importantly, great entertainment.

While the Next Gen design itself needs a serious overhaul, I still have faith in the listed-parts formula once the kinks are ironed out. 19 winners in the first 29 races is great for the sport no matter how you slice it.

NASCAR decided long ago that it wants drivers, not engineers, to make the difference. The writing was on the wall when Ray Evernham’s T-Rex was banned after the 1997 Winston. Whether or not you agree with it, the sanctioning body is clear on the subject. If you like your racing to push engineering boundaries, go watch Formula 1.

On this day in 1997, Jeff Gordon drove the infamous T-Rex Car at The All-Star Race and won, NASCAR would then ban the car #NASCAR pic.twitter.com/VJzuXGa6o1

So, if NASCAR isn’t willing to throw out the new rulebook, go back to the old one and let teams innovate mid-season, what’s to stop them from asking the teams and drivers to redesign the car for everyone to use?

Well, while this isn’t the same NASCAR that would see Bill France pull out his revolver whenever he heard the word “union,” it isn’t all that different. The France family is supposed to rule with an iron fist. NASCAR can’t be seen to be publicly pushed around by its teams, whether to avoid any accusations of an uneven playing field or, more likely, because they want to make sure that the drivers and teams know who’s boss.

NASCAR is also unlikely to make any changes mid-playoffs for fear of artificially impacting the result (OK, what do you call a random tire failure at Bristol or Texas if not artificial). If we aren’t trialing racing without the diffuser at Martinsville Speedway this October, we’re unlikely to see any changes at all until 2023.

See also
Drivers Angry with Cars, Tires, Each Other After Texas Marathon

I’ll be truly surprised if the Next Gen car continues in its exact same form into 2023, but I feel equally confident in saying the car we have now is the car that races at Phoenix Raceway. If I had to guess, NASCAR will absolutely seek the assistance of the teams in redesigning the Next Gen car during the offseason, and they’re probably already collecting feedback.

They’ll just try their damnedest to keep the whole process under wraps, because that’s what NASCAR does.

With 19 winners overall and no championship-eligible winners in the first four playoff races, is NASCAR going to change the championship format for 2023? – Jason O., Kingston, N.Y.

Insert obligatory Homer Simpson meme here: 19 winners so far. With Ryan Blaney, Martin Truex Jr. and Brad Keselowski all showing speed lately and yet to win, we could realistically get as high as 22. And Michael McDowell isn’t out of the question. And Corey LaJoie could back up his Atlanta Motor Speedway performance with a strong run in this weekend’s pack race at Talladega Superspeedway. …

RETWEET if you think we'll break some @NASCAR records.

19 different winners this season. 20 would break the record. pic.twitter.com/57tFATIIvM

Well, I’ve been speculating for years that NASCAR is primed to introduce a convoluted way to win your way back into the playoffs after elimination, but thankfully that hasn’t happened yet.

Still, trying to explain the 2022 championship format to a friend you’re trying to convince to give NASCAR a shot can become embarrassing by the time you’re 15 minutes in and talking about how regular points reset after a round, but playoff points carry over (except in the finale of course, when stage points don’t count for the Championship 4 but they do for everybody else).

Think of it like the old adage about frogs in a pot of boiling water. Each new modification to the championship format after 2004 raised the temperature just a little, so slowly that the frogs already in the NASCAR fan pot easily adjusted to it. Now, with stage racing, playoff points, waivers and resets, the water is so hot, any new frogs will be so confused, they hop right back out again.

My wildest prediction: I believe that in the future, NASCAR will bring back full-season points to determine a champion. That may be three years from now or 25, but this new sanctioning body is noticeably more willing to make big changes in response to fans’, teams’ and drivers’ criticisms. NASCAR is as willing to draw inspiration from the past (North Wilkesboro Speedway All-Star Race) as it is to gamble on the future (Clash at the Coliseum). And, for the first time ever, NASCAR is occasionally willing to admit that it was wrong — see the fallout from the previous Texas Motor Speedway race earlier this season.

Scott Miller explains the situation of why the caution flew for Ricky Stenhouse Jr. and what NASCAR saw as far as Ryan Blaney’s window net and whether it was latched: pic.twitter.com/vNztTm35MI

A record number of different winners in 2022 will help them get there.

I remember once describing to somebody the closing laps of the fall Phoenix race in 2016. If you don’t remember, that was Alex Bowman’s standout performance as Dale Earnhardt Jr.‘s relief driver, where he accidentally took Matt Kenseth out of the race on a late restart, opening the door for Joey Logano to win his way into the finale at Homestead-Miami Speedway.

My friend, who did not care at all about NASCAR up to that point, said “Oh, I think I get why you like this now. There are so many different stories going on for so many people.”

With four consecutive races of championship-ineligible winners, there isn’t just the one story coming out of every weekend. There’s the championship battle, the fight for the win … unfortunately, there’s also been tire failures and reliability problems. The championship is unpredictable, but so is every individual race. This is the playoffs, where points racing and strategy is going to shine. It could very well be the most memorable since the inaugural elimination Chase in 2014.

Unfortunately, since NASCAR is up against football again, there haven’t been that many people watching. But one problem at a time.

To actually answer your question, no, I doubt NASCAR will make any format changes for 2023, but the long-term effects of 2022 will have far-reaching impacts on the way champions are determined in the sport.

Everyone points to 19 different winners as if it’s proof that the new car is better. Just like they point to number of lead changes to prove a race was good. Both prove nothing about the overall product, so maybe it’s time to stop acting like it does.

The G7 has helped the racing at some of the intermediate tracks, but I agree with you. And the lack of a clear favorite driver to win the championship really just means that all the teams are struggling to adjust to the new car and deal with the issues that have plagued it.

I would go a step past your excellent point Bill…how the hell do we know who, if anyone, is having a good season?

This is the equivalent of every baseball team going 81-81 and people thinking “it’s so much more fair now!”

Half the field makes the playoffs now, and the first three races were won by drivers who didn’t even make that large of a cut.

What driver is good? What team is good? I have no freaking idea this year.

If the teams were allowed to “fix” what obviously needs fixing. Then NASCAR is right back to what it got away from.
NASCAR came up with this, & they will have the short off season to get it right. They do need to listen to the owners, & drivers. But the onus is on them, & like the Bandit, they have a long way to go, & a short time to get there.
The time to start is NOW. They need to decide what to try, then get a retired Jimmy Johnson? & a test car to avoid giving a team an advantage. But to fix the problem they have to admit it exists. Finger pointing, & blame shifting never solved anything, & it won’t solve this either. Judging what I am hearing & reading form long time fans, I think the future of the sport depends on getting this right by Daytona.

WAITING FOR APPROVAL BY THE CCP GUIODELINES I GUESS

There was nothing wrong with what they tried to get away from. It was a lot better than this.

I enjoyed the racing during the times of “the big three” more than anything we see today. Part of measuring a driver’s skill is putting them in a car that is difficult to drive but if they can pull it off they leave people behind. I may just go watch F1 because this product is random chaos sold as exciting racing.

This is NerfASCAR that’s why we have 19 different winners. That and parts that fail, cars that catch fire, and tires that blow. Last year was better, as much as I hated watching the accordion racing.

NASCAR seems to want IROC. IROC was an interesting series to watch but was only good for about 4 races worth, which was how long their season was.

You may be right about the end of the playoffs. I’ve been saying the same thing. It may not be necessary (or even watchable) with this new car.