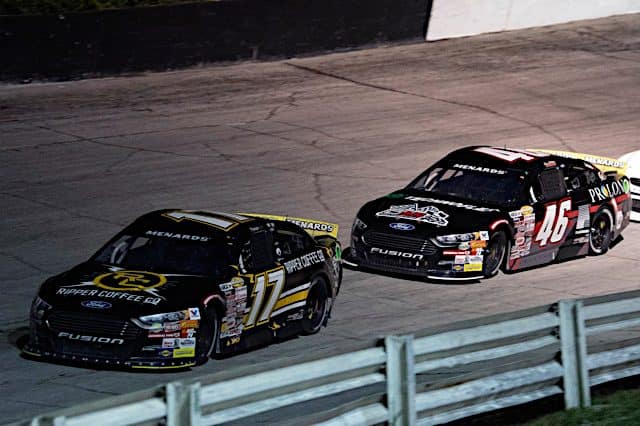 The penultimate event of the ARCA Menards Series’ season takes place at the 0.555-mile short track Salem Speedway. Nick Sanchez leads Daniel Dye by only five points entering the Herr’s Snacks 200. Who will lead the points heading into the season finale and who will claim the victory?

The 20 drivers will drive a treacherous 200 laps at the short track known for its high banked corners. The 33-degree banked corners will make the ARCA annual visit there a battle between competitors and learning how to drive the racetrack.

Of the 20 drivers entered, Jesse Love is the only previous winner at Salem. The two-time ARCA Menards Series West champion won this event last year.

Love is seeking to become the first back-to-back ARCA winner at Salem since Christopher Bell swept the two ARCA events there in 2016.

Love is piloting the No. 20 Venturini Motorsports Toyota with 16-year-old Conner Jones and full-time Toni Breidinger as his teammates in the Nos. 15 and 25, respectively. Jones and Breidinger are making their first starts at Salem.

Of the top three in the championship standings – Nick Sanchez, Daniel Dye and Rajah Caruth – Dye is the only driver who has not competed at Salem before.

Caruth finished third in the 2021 ARCA Salem event, scoring his first top-five performance. Sanchez qualified third in that event, but his involvement in a lap 43 caution flag incident resulted in a 17th-place DNF.

Sanchez enters Salem with some momentum, though. Last Saturday (Sept. 24), Sanchez wheeled the No. 48 Chevrolet to his best-ever NASCAR Xfinity Series finish, 11th.

“Short tracks, you know, we generally struggle on them, but we’re trying to get better, trying to make improvements,” Sanchez told Frontstretch after that Texas race about the two remaining ARCA races this season. “I know I became a better driver today from the race, so hopefully this will help that and it’ll make those cars easier to drive.”

Dye is visiting Salem for the first time, but his GMS Racing team with crew chief Chad Bryant saw its driver Kody Swanson finish ninth in the Salem race last year. Dye currently is riding a four race top-five streak and a 12 race top-10 streak, so he will likely wheel his No. 43 Chevrolet up front at Salem.

Three-time ARCA victor Taylor Gray finished 11th in the 2021 Salem race after starting second. Gray’s finish was not indicative of his performance though as he endured a cut tire during the race which resulted in Gray finishing three laps down.

Ty Gibbs led a race-high 155 of the 200 laps at Salem last year before a lane choice on a restart cost him the victory as he wound up runner-up to Love. The No. 18 team seeks to gain one spot in 2022 with newly crowned, and back-to-back, ARCA Menards Series East champion Sammy Smith.

Smith is making his first-ever start at Salem. Smith trails fourth-place Greg Van Alst by 13 points in the championship standings, and Smith could impressively finish there despite missing four races in 2022 due to his age.

2022 Hickory Motor Speedway late model champion Landon Huffman will make his second career ARCA start at Salem. In his ARCA debut in 2016 at Berlin Raceway, Huffman qualified fourth before he crashed out to a 16th-place DNF.

Huffman will drive the No. 44 for team owner Jeff McClure, who will also serve as the crew chief. McClure was Huffman’s crew chief in his other ARCA start. Huffman has high aspirations for the Salem race.

“Like any racer, I’ve got high expectations for myself heading into this weekend,” Huffman told Frontstretch. “I expect to compete and run towards the front and I know Jeff will put a car capable of doing so on the racetrack. Realistically if we can go into Salem and run top 5 against the big teams, that’s a great day for both myself and Jeff McClure Racing.”

Even though he has not driven a racecar at Salem before, Huffman knows the short track quite well.

“I’ve had the opportunity to spot multiple ARCA races at Salem over the years so even though I haven’t made laps at the facility, I’m going into this weekend confident in my knowledge of the place,” he said. “I adjusted quickly back in 2016 at Berlin and we competed in the top three all race. Salem has a lot of appeal. It’s worn out, fast, and a drivers track. I’ve raced all season at Hickory Motor Speedway, another worn-out racing surface, so I think having that experience in my back pocket, it will help us going into this weekend.”

McClure’s No. 44 team is 20th in the owners’ standings with a best finish of fourth place, earned by Thad Moffitt at Talladega Superspeedway. It holds 20th place by 23 points over the No. 69 team, an important spot for the end-of-year owners’ purse.

Currently 16 teams have attempted every race (note: #06 is a point transfer from #27) pic.twitter.com/P3KfyTjE75

The ARCA drivers will get acclimated to Salem on Saturday (Oct. 1) with a 45-minute practice session before qualifying. Then, the drivers will compete for 200 laps in the Herr’s Snacks 200 at 4 p.m. ET with TV coverage provided by MAVTV Motorsports Network and available on FloRacing.