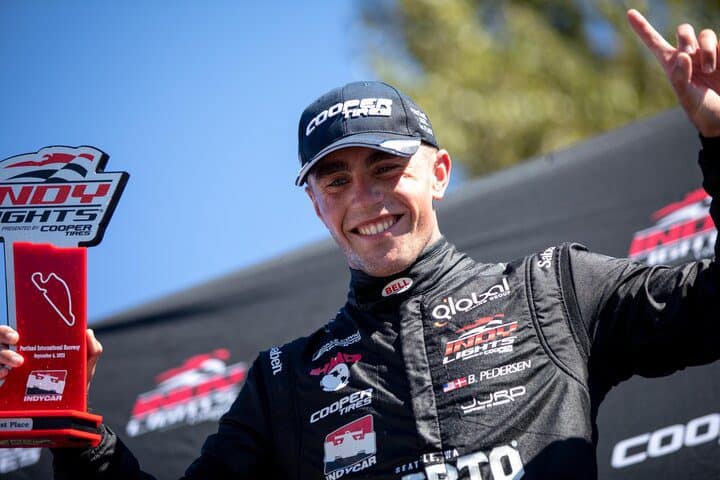 Indy Lights standout Benjamin Pedersen is taking the next step in his career as he will move to the NTT IndyCar Series for AJ Foyt Racing in 2023, Foyt announced Sept. 28.

The deal is for multiple years, though the exact length was not specified.

Pedersen, a native of Denmark, won at Portland en route to a fifth-place finish in the Lights standings in 2022. He amassed seven top fives and 12 top-10 finishes to go along with his win.

“I’m super excited to get going with the team,” Pedersen said in a team release. “I’ve spent a lot of time this season with AJ Foyt Racing learning the ins and outs of making the jump to INDYCAR, and it’s been really nice to do that in conjunction with my Indy Lights season. INDYCAR has been my target goal since I started open wheel racing in 2016. The racing, atmosphere, fans, events, tracks, etc. are all awesome.”

“We are really looking forward to having Benjamin as part of the team,” team owner AJ Foyt said. “His enthusiasm is infectious, and he is 100 percent committed to INDYCAR, AJ Foyt Racing and doing the best he can to win races. It’s been great to have him embedded with the team this past season, and everyone is excited to hit the ground running when testing begins. It is also great to have a multiyear program in place, which will help him and the team grow together.”

Pedersen is the first driver to be announced to the Foyt roster for 2023. His number is currently unannounced. The team fielded full-time rides for Dalton Kellett and Kyle Kirkwood in 2022.