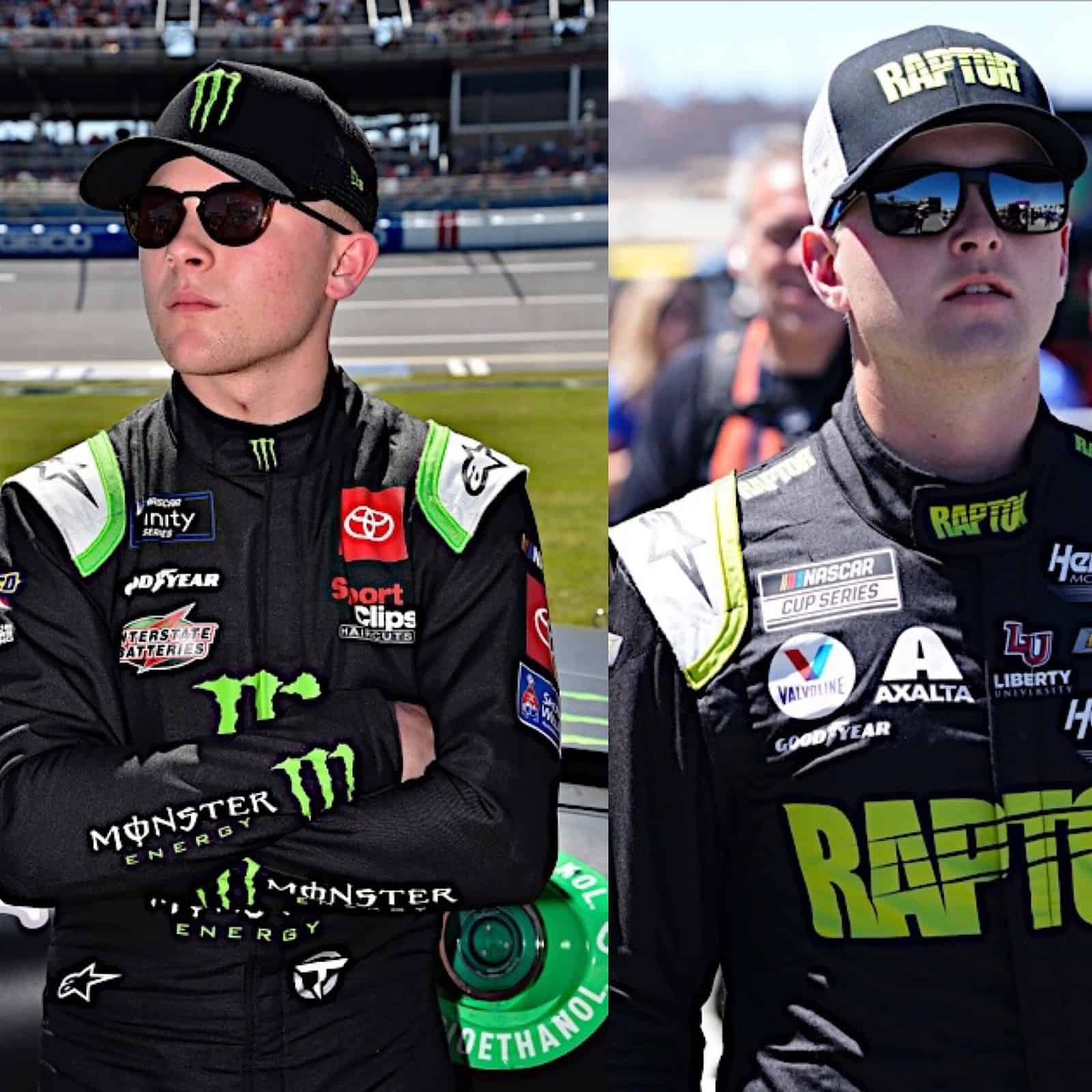 Let’s tackle them one at a time.

Precedent #1: A driver wrecking someone else under caution will mean the loss of 25 driver points, 25 owner points for his team and a $50,000 fine.

That’s the penalty for Byron after intentionally hitting Denny Hamlin under caution at Texas. His violation of Sections 4.3.A & 4.4.C of the NASCAR Member Code of Conduct could not have been clearer. Byron’s contact was caught on his own in-car camera even as NASCAR officials missed seeing it altogether.

Since officials didn’t see the incident live, Byron was allowed to keep his position on the racetrack, eventually finishing seventh in the race. Hamlin, who flashed top-five speed most of the race, spent the rest of it grinding his way back to 10th.

We will appeal the penalty issued today by NASCAR. https://t.co/qKlVI8qPHA

I understand why they’re trying; after all, Byron went from 17 points above the playoff cutline to eight below. They owe it to their sponsors and the No. 24 crew who works so hard on these Chevrolets each week to at least try and beg for leniency.

But the evidence is not on their side. Byron has made clear he was “pissed off” over Hamlin crowding him off turn 2 earlier in the race. The video shows the No. 24 car clearly accelerating straight into the No. 11’s bumper as the yellow flag waved. The Code of Conduct is a clear one-line statement: thou shalt not wreck someone else under caution.

See also
NASCAR Mailbox: Why Can't the Teams Fix the Next Gen Car?

You could argue Byron should have been parked by oblivious NASCAR officiating. That would have left him 30th, a difference of 23 points. So the 25-point penalty after the fact, along with a fine, is marginally worse.

It’s also better than the alternative: a one-race suspension. That’s what Kyle Busch got after wrecking Ron Hornaday Jr. under caution, also at TMS, in a NASCAR Camping World Truck Series race back in 2011.

For those angry Byron didn’t receive the same punishment: I think Busch’s actions were more extreme. He followed Hornaday into the corner, superglued to his bumper and turned him hard right into the outside wall at high speeds, a more dangerous maneuver than landing a bump-and-run in the tri-oval. Busch was also moonlighting in another series and directly interfered in their championship.

The only additional penalty I think NASCAR should have considered here was removing the automatic bid to the Round of 8 if Byron wins at either Talladega Superspeedway or the Charlotte Motor Speedway ROVAL. An eight-point deficit is easy enough to recover from as it is, especially with two races left in the round.

As for Byron himself, his reputation is at an inflection point. I understand the 24-year-old looking to stand up for himself, getting bulldozed on several occasions this year (most notably when Joey Logano bumped right through him to win at Darlington Raceway in May). Your reputation as a driver is half the battle, and if rivals know they can get away with roughing you up at this level, they won’t hesitate to do it.

But Byron needs to learn how to stand up in those moments, understanding when and how to get revenge. His reaction to what happened reminds me of how Logano melted down at Pocono Raceway back in 2010, when late-race contact with Kevin Harvick spun him out. Logano’s father then started an altercation in the garage area before the driver himself popped up and made his infamous “wife wears the firesuit in the family” comments.

On the racetrack, it felt like Harvick was clearly to blame. Logano let him off the hook with the way he reacted, losing more respect by stumbling all over himself in how he handled adversity.

Let’s hope Byron has a good apology in store for when this appeal process ends along with a better strategy to increase on-track respect going forward. He’s going to need it. And let’s hope NASCAR officials stick to this exact same precedent going forward; it should be coded in the rulebook.

Precedent #2: A driver body-slamming someone on pit road will mean the loss of 25 driver points (when applicable), 25 owner points for his team and a $75,000 fine.

That’s what Gibbs got for this videotape in which he slammed into Ty Dillon in the middle of pit stops. The reaction was so uncalled for, other drivers were openly calling out the move on social media.

Really glad no one from @RFKracing or @NASCAR was hurt here.

This could have been really bad https://t.co/QflQdEjxiF

Unlike Byron, Gibbs chose not to appeal and issued an apology for his conduct. “I want to apologize for what happened on pit road during the race Sunday,” Gibbs said. “I have to have a better understanding of the situation and my surroundings. I’m thankful no one was injured and will learn from it.”

Don’t ever bump me under yellow again

The bigger question here is whether Gibbs is actually learning, period. He’s made a long line of drivers angry this season, from wrecking Ryan Sieg at Las Vegas Motor Speedway to roughing up his own teammate, John Hunter Nemechek, for a win at Richmond Raceway. At 19 years old, Gibbs continues to display the kind of immaturity that had several handlers around him hesitant about a full-time move to the Cup Series in 2023.

That’s why, if I was NASCAR, I would have added another bullet point to the Gibbs punishment. Since he’s not competing for points in the Cup Series, a 25-point driver penalty didn’t apply to him. So why not take those points and deduct them from his NASCAR Xfinity Series total instead? That’s the type of move that will hit Gibbs where it hurts, potentially taking away a championship bid he’ll never be able to fight for again.

It’s the shame of this incident, as 23XI Racing did nothing to deserve the points reduction it got. In fact, the crewmen themselves could have gotten hurt by Gibbs’ actions depending on how and when pit road contact was made. So while I’m glad NASCAR set a clear precedent going forward, I’m not sure the teenager at the center of it all actually learned anything.

The only lesson that can be learned is to make sure you get even under green flag racing conditions.

I’m not sure I understand all I know about the Byron Hamlin deal. I think NASCAR reacted more to outside pressure about missing this, than to the incident itself.
How is it more egregious to wreck someone under caution, than under green when others are much more likely to become involved, & it becomes more serious due to the speed involved?
Last year Harvick tried to take out Elliott under green conditions. That he failed really has no bearing. Yet NASCAR totally ignored the whole thing. Karma didn’t but that’s another story.
To my way of thinking, after they became aware of what had transpired, the correct call would have been to send Byron to the back of lead lap cars & issued a fine. And leave Hamlin where he blended in.
If they were to have put him back where he was running. Then why wouldn’t have let Blaney pit & fix his window net (which I think safety dictated they should have done) & let him resume the lead at the ROC?
Possibly taking a team out of the playoffs is about as serious as it gets, & I’m not in favor of them potentially trashing a team’s season. I hope the team can advance, but it’s in serious doubt.

“Well, it was a good night. Nobody died.”

“It’ll get worse before it gets better.”

NA$CAR should change the name to France Family Folly! Triple F! Sounds like a character in the WWE.

Curious as to why NASCAR isn’t initiating any penalties on the instigators in these situations?

As well as why hamlin has never been penalized for going after Chastain, Brad K, etc Treat him like a princess and he’ll act like one.

Byron will get to the final 8 I hope. I think if Byron doesn’t make the next cut then I’d make sure Hamlin isn’t the champion

How is it that Hamblin gets off Scott free over and over? His behavior under caution at Texas, and other tracks, not to mention his childish display last year when he wasn’t happy with someone else winning, never draw any penalties. He doesn’t even ever get “called to the hauler”.

As usual, Hamblin’s imploding as he gets deeper into the playoffs. Once again he appears to be letting the pressure of the playoffs, and his own inability to control his emotions, derail his chances of winning a championship. And I’m okay with that, Hamblin’s as much of a jerk as the young Gibbs.

You know, when you have problems with half the field, the problem is probably you, Dennis the Pennis.