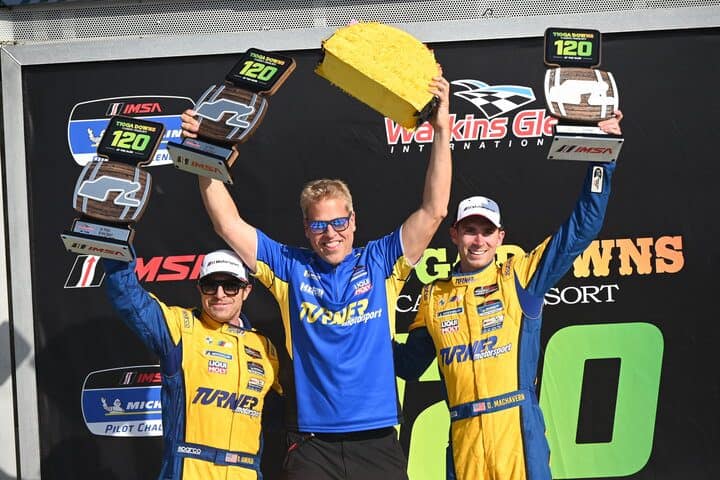 In North American sports car racing over the past 35 years, there have really only been a couple of mainstays on the scene. One was Scott Pruett, who was a factory driver with Roush Racing in the 1980s before moving to INDYCAR and CART. He then returned after a stint in the NASCAR Cup Series and had a long career in Daytona Prototypes before stepping away in 2018.

The other is Bill Auberlen, a 53-year-old racer out of Redondo Beach, Calif., who has been racing sports cars almost continuously since 1987. The vast majority of his career has been spent racing BMWs, a relationship that stretches back to 1995.

Prior to that, Auberlen had primarily raced Porsche 911s and a Mazda RX-7 in IMSA competition. BMW had just entered the GTS-2 class with a pair of factory backed M3s with Valvoline sponsorship but had struggled with mechanical issues.

“[Me joining up with BMW] is a crazy story,” Auberlen told Frontstretch at Watkins Glen International earlier this year. “I had raced my own Mazda RX-7 back in the day, but I couldn’t afford to pay to get onto a good team. Had to do it all myself.”

What that entailed at first was racing a Porsche owned by his father Gary, a former class winner at the 12 Hours of Sebring, and crewed by himself and a group of friends who worked in a Porsche repair shop. Eventually, they sold the Porsche and bought an RX-7 from South Carolina-based past IMSA GTU champion Roger Mandeville. Auberlen campaigned that car into the 1990s.

Eventually, in 1995, things came to a head during the season-ending street race weekend in New Orleans. Auberlen crashed his Mazda in practice and nearly wrote it off, enough that it couldn’t be repaired at the track. At the time, he was second in GTS-2 points.

Charlie Slater, who also owned IMSA at the time, offered up his seat in the Alex Job Racing No. 26 Porsche 911. He then out-qualified the now-sorted M3s to start on pole in an unfamiliar car.

“I end up winning the race in the Porsche,” Auberlen said. “I see some of the BMW guys someplace later and I tell the marketing guy, ‘Hey, tell BMW to hire me, I’ll leave my Mazda at home and you can win your first race.’”

Auberlen described this tactic as somewhat pretentious and a definite change in pace from what he normally did at the time. However, it worked.

“I get a phone call from Tom Milner (owner of PTG Racing),” he said. “He says, ‘Texas World Speedway is coming up. How much is it gonna cost for you to race for us. I was thinking, ‘You could make money racing?’ I had no idea that I could make money.”

That call resulted in a 27-year relationship with the German manufacturer that continues to this day. By 1999, he was driving an LMP900 BMW factory car and winning countless races.

Today, Auberlen still has the hunger to win, despite having an IMSA record 65 class victories already. However, he also wants to impart his knowledge onto others.

In the IMSA WeatherTech SportsCar Championship, Auberlen shares his BMW M4 GT3 with Robby Foley, an up-and-coming racer out of Randolph, N.J. Over the past few years, Auberlen has watched Foley grow as a driver.

“In the beginning, he was a moldable talent,” Auberlen said. “Now, he could be a full factory works driver, he’s that good.

“He’s flawless, he’s fast, he’s nice. I’ve been racing for a long time and come across a lot of teammates. Some, you want to put the effort into [helping them] because they’re a worthwhile candidate and some you don’t. [Foley] is worthwhile. I want to see him succeed real bad, and he will.  I’m proud of him.”

Auberlen and Foley are currently fifth in GTD points with a victory at Mid-Ohio Sports Car Course in May. They have had chances to win additional races but have had bad luck. For instance, there was a monitor outage at Sebring back in March that resulted in Auberlen being forced to pit to give way to Foley while racing for the class lead. Auberlen was only 17 seconds from exceeding the maximum drive-time and would have been placed at the rear of the field.

In Foley’s case, there is a good sporting chance that he could go in that direction. Saturday’s Motul Petit Le Mans will likely be Auberlen and Foley’s final race as full-time teammates. DailySportsCar.com’s Graham Goodwin reported earlier this week that the FIA has put Foley’s driver ranking for 2023 under review for an upgrade to gold. If that goes through, he would no longer be able to race as a teammate to Auberlen in WeatherTech unless Turner Motorsport chose to move up to the GTD Pro class.

In the Fanatec GT World Challenge America Powered by AWS, Auberlen races for BimmerWorld Racing and is teammates with Chandler Hull, a relative newcomer to the scene who is in his first full year in GT3 equipment.

“[Hull] is a good kid; he’s talented,” Auberlen said. “I’ve watched him for a few years. Early on, he had to get his sea legs and he had some little accidents here and there. Now, he knows how to go quick and how to make it happen. I tell him something and he puts it into his mind and makes it happen on the racetrack.”

Auberlen continued on to make note that Hull has an extremely supportive family that is always by his side at the track. He said he believes that Hull has what it takes to have a decent and lengthy professional racing career.

Auberlen and Hull are currently fourth in Pro-Am points with no victories but four second-place finishes. They’ve had their fair share of bad luck. For instance, last weekend at Sebring, Hull managed to get wrecked in race one before even getting to the start-finish line.

Race one at Watkins Glen saw the BimmerWorld Racing drop way due to a rather unusual issue. The trunk hinges broke, resulting in the trunk flopping back. A car can’t go all that fast in this scenario.

There are a lot of strange things that can happen in racing. For @bimmerworld's @chandlerhull26 and @Billauberlen, they had to deal with this in @gtworldcham Race No. 1 at @WGI back in July. I don't think I've ever seen this before. pic.twitter.com/D8lBMjtGC2

These days, Auberlen can often be seen racing for Turner Motorsport, an Amesbury, Mass.-based BMW tuner and race team that has over 20 years of racing experience. In addition to IMSA competition, Auberlen has driven for the team in what was then SPEED World Challenge in the Touring car division. They have a relationship that dates back to the early 2000s.

What keeps the relationship between Auberlen and Turner Motorsport so strong?

“A) they run a BMW, which is a great thing,” Auberlen explained. “B) Will Turner … is one of the coolest guys out there.

“To run for a team like [BMW M Team RLL] is fun, but there’s lots of pressure from the factory. You have great cars, great teammates, great things, but you have a hard time smiling because there’s a lot of pressure.

“You get to Turner [Motorsport], and you’re driving the same great cars, but you’re free. You can drive fast and let cars rip and [the team] is very supportive. It’s a great environment to race.”

It is that free environment that allows Auberlen to continue to thrive and contend for victories while racing into his fifth decade. While he stepped away from full-time factory driving for BMW after 2017, he still maintains a strong relationship with the manufacturer and almost never races a non-BMW to this day.

Auberlen has no plans as of now to step away from racing. In fact, in a little over a year, he will be due a ranking downgrade due to age.  He will turn 55 on Oct. 12 next year, which would drop him from a Gold to Silver driver rating. If anything, he could choose to expand his schedule since there would be substantial demand for a driver of his abilities.