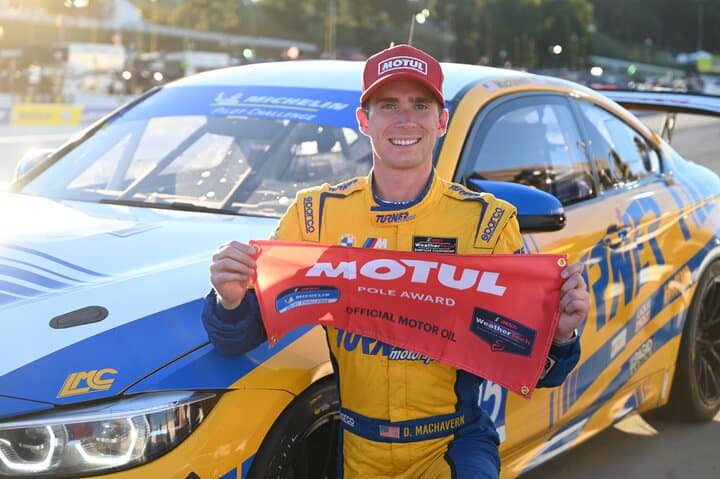 BRASELTON, Ga. – Turner Motorsport’s Dillon Machavern won the pole Thursday (Sept. 29) for Friday’s IMSA Michelin Pilot Challenge FOX Factory 120 with a lap at 105.897 mph in an unusual session in which very little time was available for lapping.  It is Machavern’s first pole of 2022.

“Luckily, we were able to get a little bit of clear track there,” Machavern told Frontstretch afterwards.  “We knew that we were only going to have one lap to get it done.  The Turner Motorsport BMW is always very quick in qualifying trim and I’m really excited to give these guys a good result.”

Normally, drivers in IMSA WeatherTech SportsCar Championship and IMSA Michelin Pilot Challenge qualifying session get 15 minutes to make as many laps as they can.  However, if there is a red flag, the clock keeps on ticking.  In addition, unlike WeatherTech, there is no 10-minute guarantee.  So, if a session is complete with seven or eight minutes of track time, it is still considered official.

Ultimately, that is what happened here.  On the first lap at speed for much of the team, a crash broke out exiting turn 1 involving NOLAsport’s Matt Travis and Rebel Rock Racing’s Frank DePew.  Both cars ended up disabled and had to be retrieved, taking up a significant amount of time.

Both drivers were ok after the incident.  DePew appeared to be a little upset after the crash, but it was unclear whether it actually had to do with the crash or not.  DePew’s Chevrolet Camaro GT4.R had right side damage.  The NOLAsport No. 47 had front end damage in the crash.

When the session resumed, there were under five minutes to go, meaning that drivers would only get two laps.  The better part of a dozen drivers then got penalized for violating the red flag procedure and had to do a drive-through penalty.  KohR Motorsports’ Luca Mars failed to set an official time at all because he got penalized and failed to serve it right away.

Machavern was able to put down his lap on his first flying lap.  It held up to give him the pole.

In TCR, things were calmer.  Bryan Herta Autosport’s Harry Gottsacker was the first driver to set a time and looked to lead the session flag-to-flag.  LA Honda World Racing’s Mat Pombo had other thoughts.

Pombo took the top spot away from Gottsacker at the halfway point of the session.  After Gottsacker immediately countered, Pombo took it back.  Then, he bettered it twice more.  The last lap was a class-record lap at 104.142 mph to win the pole.

The FOX Factory 120 is scheduled to go green at 1:10 p.m. ET Friday afternoon.  Coverage of the race will be streamed live on Peacock starting at 1:05 p.m. ET.