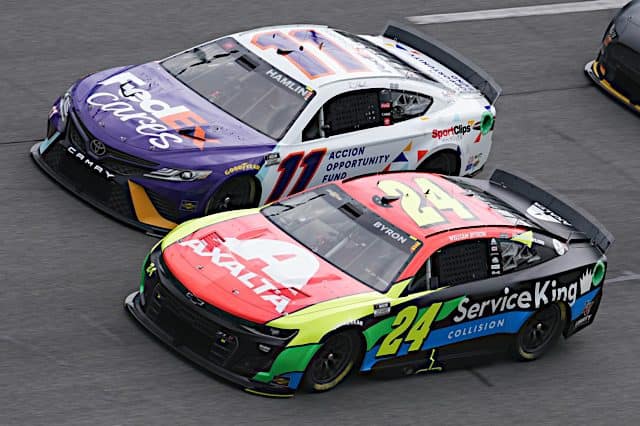 Once upon a time, Ricky Craven predicted a change in NASCAR.

He surmised that a day would come when drivers in NASCAR’s national divisions would look back and remember when they used to crash into bare concrete walls on a weekly basis.

Craven’s prediction has long since come to pass; most of today’s drivers in those series can’t even look back and remember the days before SAFER barriers, head and neck restraints and custom-made seats designed to protect them in the event of a crash. And because of that, a generation of fans has never known the stunning blow of learning that a driver passed away in an on-track incident in any of NASCAR’s national divisions.

After a series of fatalities — four over the course of less than two years, five if you add ARCA to the mix — all caused by the same type of injury, NASCAR engaged in what should be its most important project of the 21st century — making the sport safer.

And they succeeded. Since Dale Earnhardt’s death in the 2001 Daytona 500, there hasn’t been another press conference announcing a tragedy in NASCAR. No driver’s family has had to experience the numbing grief of loss because of racing, no fan has wondered what was next for the sport or who he or she was going to root for now.

Some of the safety measures NASCAR has implemented in that time included mandating SAFER barriers at any track wanting to host Cup races (there were and are a few exceptions for dirt tracks and some areas of road courses, but by and large, tracks have only increased the number of surfaces protected by those so-called “soft walls” since the early 2000s).

Drivers were required to wear head and neck restraints and full-face helmets to protect them from catastrophic injury. Each successive generation of racecar was safer than the last.

The so-called Car of Tomorrow was ugly as sin, but it was a step forward in safety. Thanks to it and SAFER barriers, Michael McDowell walked away from this crash at Texas.

The work NASCAR did to improve racing safety is perhaps its crowning achievement.

But time passes and people forget. NASCAR’s Next Gen car is the third new racecar since Earnhardt’s fatal crash. The fifth- and sixth-generation cars were underwhelming on the track, but each an improvement over the last in terms of driver safety. Drivers walked away from horrific crashes.

But 2022 feels different. The Next Gen car has raced well at a lot of tracks and allowed more drivers and teams to show their talent every week. There’s been a lot to like.

Except that from the beginning there have been questions about its safety. Before it even took to the track there were questions: after a crash test, the results, which were not released publicly, came under fire from drivers and those privy to results. NASCAR assured everyone that the results they had feared were the result of faulty equipment.

See also
Dropping the Hammer: The Next Gen Car vs. the Internet

But the questions have lingered. More and more drivers are expressing concern after crashes, saying they hurt more and for longer than ever before from a similar impact. The cars, designed for durability, don’t crumple like the previous ones, and the force of impact is going somewhere. There have been mysterious, spontaneous fires (which have hopefully been corrected).

Cody Ware collapsed in pain after this Texas Motor Speedway crash, one that didn’t look anywhere near as severe as McDowell’s. Was that because the car doesn’t have enough give? It was certainly a big hit, but was it that big?

Added to all of that have been persistent tire problems at some tracks. The new larger wheel means that the tires have a shorter sidewall and that, combined with the added force from the new suspension, has led to a lot of blowouts at some tracks. And too often, blowouts mean crashes.

It came to a head at Texas this past weekend, when multiple tire failures led to a record number of cautions, and one impact left a driver reeling on pit road after climbing out.

Because NASCAR’s track record until now has been so good in the safety department, I want to give the benefit of the doubt here. Hopefully the tire and wheel issues will be addressed in the offseason, along with the affects of crashes.

The alternative is too much, too tragic, to consider.

See also
Dropping the Hammer: Put Texas Motor Speedway Out of Its Misery

But there was another issue at Texas that NASCAR did have complete control over. It’s on this one that officials dropped the ball on race day and then fumbled it again two days later.

There were two separate incidents, both under caution, that should have raised more than eyebrows in the control tower — they should have raised ire, because they were dangerous, stupid moves that NASCAR has penalized heavily in the past.

Hamlin didn’t suffer major damage, but that’s inconsequential under the circumstances. Byron set the stage when he intentionally wrecked another driver under caution. It was at the same track in 2011 when Kyle Busch, angry for a Camping World Truck Series racing incident with Ron Hornaday Jr., punted Hornaday under caution. Busch received a full weekend suspension from NASCAR for his move, including Sunday’s Cup playoff race. Why? Because the move was intentional and under caution.

What did Byron get for a move that was admittedly intentional and under caution? A 25-point penalty and a fine. That’s a quarter of the penalty that Brad Keselowski got for fixing a damaged body panel earlier this year because there was a shortage of parts.

This car has drivers hurting more after crashes and the penalty was next to nothing? Byron wasn’t even parked because NASCAR’s officials in the tower somehow failed to see the incident despite it being on the in-car camera in the No. 24 and replayed multiple times on the TV broadcast. Busch certainly found a copy with no trouble and he wasn’t happy about the disparity in NASCAR’s reaction — and he’s not wrong.

No penalty for this?! Depends on who you are I see 🤷🏻‍♂️ https://t.co/dIrt6x4Lfk

The point penalty hurts a little, but Byron’s only eight points below the cut line as a result with two races to rebound.

And that wasn’t even the worst incident to happen under caution on the night. On pit road, Ty Dillon bumped Ty Gibbs exiting his pit (Dillon either wasn’t cleared or was told he was clear when he wasn’t, but he couldn’t see Gibbs). Gibbs responded with a door slam to Dillon that sent Dillon’s car hard left, nearly into a pit stall where a crew was working on a car with a NASCAR official looking on. Dillon’s car came within a couple of feet of the official, who didn’t have the benefit of a roll cage to protect him from a ton and a half of racecar.

Ty Gibbs almost door-slammed Ty Dillon into a pit stall after Dillon got too close to him on pit road pic.twitter.com/vf3AMF9aYV

Gibbs’ penalty was a $75,000 fine. He couldn’t be docked points because he isn’t eligible for them in Cup. But he should be sitting at home for a couple of weeks at least.

If you don’t know why what Gibbs did was terribly wrong, take a minute to read about Mike Rich, a crewman on Bill Elliott’s team who was fatally injured while pitting Elliott’s car. Ricky Rudd lost control and slid into Elliott’s pit, injuring Rich and another crewman, who recovered. Pit road is inherently dangerous, angry drivers have no call to carelessly increase that danger over a minor incident. Or a major one, for that matter, which Gibbs’ situation was not.

NASCAR had a chance to take a stand on safety this weekend. By suspending Byron for a week and Gibbs for at least that, preferably more, the sanctioning body would have made a huge statement that they aren’t complacent, even amid the issues with the Next Gen car’s problems. It would have told fans that it doesn’t matter if a driver is in the playoffs or not when it comes to disregard for the safety of others.

Because of NASCAR’s recent history of safety innovation, I want to believe that there will be some serious work in the offseason to correct the tire issues and the impact absorption issues with the car. Hopefully a year from now, the story will be about the many different winners and the parity and not about safety, or worse, about a terrible tragedy.

It could have started at Texas with heavy penalties to Byron and Gibbs. Hopefully it will start now. If not, the road ahead is long and dark.

Amy, while I am not disagreeing with your overall sentiment, you didn’t really offer a solution to drivers that feel wronged on the track. You can say how things should work in a perfect world but this world is far from perfect. I want to say that I can’t stand Hamlin and I have no love for Byron (although I still have a soft spot for the 24 car having been a Gordon fan).
So Hamlin slides up and pushes Byron into the wall. Chastain slides up and pushes Hamlin into the wall. Both drivers that were forced into the wall feel wronged.
What should happen next?
Should NASCAR do something to Hamlin in the first case and Chastain in the second case for rough driving?
Should the wronged driver take their revenge during green flag racing?
Should they take their revenge during a caution?

what happened to “boys have at it?” I don’t want to see them take actions like that on pit road because there are too many unprotected people in the way but honestly a bit of payback on the track doesn’t bother me at all.

If every driver who did something wrong was parked there would be nobody left to race.

I think that NASCAR is purposely inconsistent in their rules enforcement so that they can maintain their own discretion when dealing with “problem child” drivers. They don’t want to be tied down by following precedent.