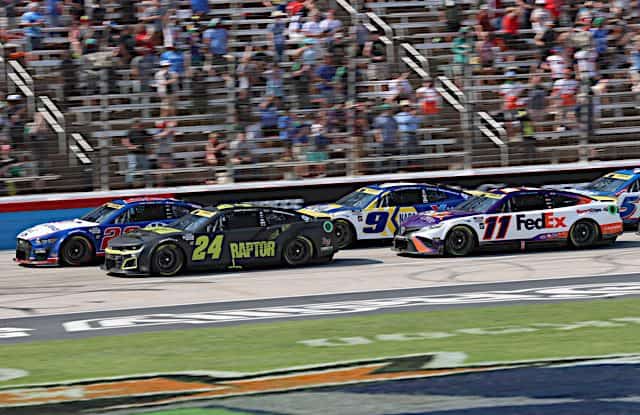 Wrecking someone under caution is pretty uncommon in NASCAR … even though this past weekend at Texas Motor Speedway nearly featured two instances of the offense.

William Byron accelerated after a yellow had flown, nosed into the back of Denny Hamlin‘s Toyota and sent the No. 11 sliding through the infield in the Lone Star State. In the same race, also in the late stages, Ty Gibbs decided to door-slam Ty Dillon on pit road, which might’ve been a bit less of an issue had there not been officials and crew members in the general vicinity — individuals that could’ve easily been hit by Dillon’s No. 42 had he not retained more control over the car.

Once the Texas debacle was all said and done, Twitter lit up with drivers — Hamlin, Kevin Harvick, Kyle Busch, Brad Keselowski among them — addressing one or both incidents, calling for action on NASCAR’s part. More recently, in the wee hours of Wednesday (Sept. 28) morning, Erik Jones chimed in to add to the Gibbs discourse — his reply nearly tripling the likes of Gibbs’ initial tweet as of this writing.

Don’t ever bump me under yellow again

All this prompts a look back on the most notable pair of incidents over the past 10-15 years, which concern Kyle Busch and Johnny Sauter.

Busch, full-time in the Cup Series for quite some time, was dueling with Camping World Truck Series title contender Ron Hornaday Jr. early in the 2011 Truck Series race at Texas for the second spot.

As they closed in on leader James Buescher, circumstances allowed Buescher to scoot away again and both Busch and Hornaday found themselves behind the lapped truck of Johnny Chapman.

Busch had the outside line but Hornaday made the squeeze, his No. 33 slamming into Busch’s No. 18 and putting both trucks in the wall.

With the caution out, both trucks rolled smoking down the backstretch and Busch accelerated into Hornaday’s bumper. Told to “get off of him” over the radio, Busch did the opposite: leaning on Hornaday even more and smashing the No. 33 head-on into the outside wall. Both trucks took hard hits.

Phil Parsons, immediately afterward, commented that NASCAR should suspend Busch for the rest of the race and maybe the rest of the season. The incident essentially derailed Hornaday’s title hopes, as he finished fourth in the standings and 50 points back of champion Austin Dillon.

NASCAR took the incident to heart and set a massive precedent: Busch wasn’t parked for the rest of the season, but he was forced to sit out that weekend’s then-Nationwide Series and premier Cup Series races.

Sauter “Keeps Running [Down] that Hill” in Iowa

Just under eight years later, the Truck Series was back at it again with the suspensions. At Iowa Speedway, Sauter and Austin Hill got into it: Sauter moved Hill, Hill moved Sauter and then Sauter tried to finish the job entirely.

Hill’s retaliation ended up sending Sauter into the outside wall, damaging the No. 13.

Then Sauter followed the No. 16 under caution and put him in the wall and rammed the Hattori Racing truck a couple more times, which resulted in the 2016 series champion being parked by NASCAR.

Somehow, despite all that, Sauter received a playoff waiver for the 2019 postseason. It didn’t matter — ThorSport Racing teammate Matt Crafton ended up hoisting the trophy at season’s end despite never winning a single race — but both of these incidents set quite the precedent for what unfolded at Texas this past weekend.

Byron’s incident, for starters, concerned drivers in the playoffs. Busch’s offense occurred before the playoffs even existed and championships were decided based on season-long points totals. Hill-Sauter was during the regular season, but both drivers did end up making the postseason (for those wondering, no more fireworks burst between the truck duo after Iowa).

Sunday’s Chevy-Toyota controversy also differs in the sense that Hamlin didn’t hit anything, though he could have — the No. 11 rebounded for a top 10, though NASCAR senior vice president of competition Scott Miller added that they would’ve sent Byron to the back if they’d noticed how the incident unfolded.

NASCAR Senior VP Scott Miller explains what NASCAR likely would have done if they had realized before going back to green that William Byron had spun Denny Hamlin and why they don’t have a live feed of all in-car cameras with their current monitor system in the tower. pic.twitter.com/OR8TmsKJWH

Gibbs’ moment is also deviant of those that came before: he’s not even points-eligible, and Ty Dillon missed the postseason, so there’s no playoff implications involved. However, even more so than the Byron controversy, as well as the Busch-Hornaday and Hill-Sauter feuds, this concerned the safety of those around the cars: if Dillon’s wheel had tilted just a bit more left or he’d lost control entirely, it could be injured crew members and officials — or worse — we’re talking about right now.

Notably, Bill Elliott pit crew member Mike Rich was killed in 1990 after a collision during stops between Elliott and Ricky Rudd’s cars. We’ve on occasion seen crew members have close calls or even be hit by cars in recent years, but NASCAR has implemented numerous safety measures to ensure that these guys and gals — dangerous as their job is regardless — are as safe as possible when carrying out their duties.

Pretty much every sport is cyclical — just look at Aaron Judge smashing dingers left and right as he attempts to break the American League’s single-season home run record of 61, 61 years after Roger Maris did it in 1961 (Judge actually hit his 61st during this writing) — so controversies like this are bound to crop up every so often.

That said, there’s definitely inconsistency in the consequences: perhaps both penalties were too lenient, perhaps both were too harsh. Spending five seconds on Twitter immediately after they were announced showed both opinions en masse, so no matter what the situation it’s bound to divide the fanbase.

Wrecking someone under caution is never okay, though something tells me the difference lies in Hamlin’s non-contact slide versus Hornaday’s trashed truck and the damage to Hill’s machine where Byron is concerned.

Gibbs, though … that’s a bit more nebulous. The close proximity to crew members, and the fact that it was his second pit road offense this season (after the Sam Mayer incident at Martinsville Speedway), feels like it could’ve elicited a much more significant penalty.