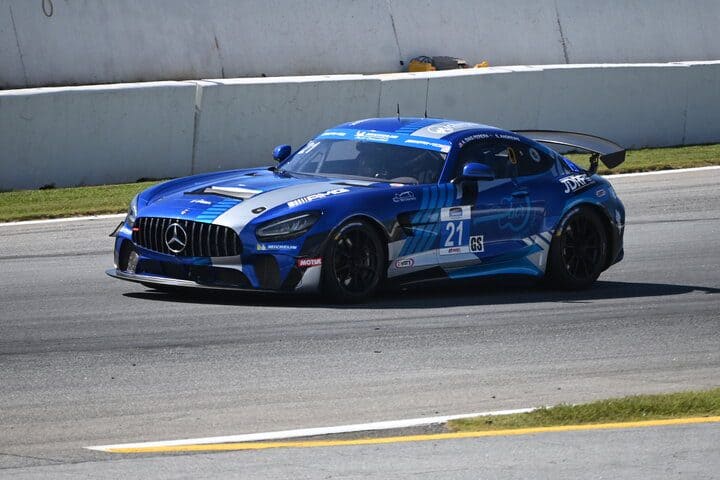 Wednesday afternoon saw Michelin Pilot Challenge teams venture out onto the 2.54-mile road course for 60 minutes of practice.  A number of drivers traded the fastest times of the session early on.  However, FCP Euro with Ricca Autosport’s Mike Skeen set a lap at 106.086 mph in his Mercedes 16 minutes into the session.  That held up to top the chart for the session.

Skeen’s lap was .013 seconds faster than the Camaro of Rebel Rock Racing’s Robin Liddell.  Turner Motorsport’s Bill Auberlen in his BMW, followed by the Porsche of Kelly-Moss Road & Race’s Alec Udell.  Robby Foley in the second Turner BMW rounded out the top five.

KohR Motorsports’ Billy Johnson was sixth in his Ford Mustang, then points leader Trent Hindman in the VOLT Racing Aston Martin.  TeamTGM’s Matt Plumb was eighth, while Murillo Racing’s Eric Foss and Owen Trinkler in the second TeamTGM Porsche were ninth and tenth respectively.  Foss told Frontstretch Thursday that his pace came despite a technical issue that led to him only getting four laps at speed (teammate Jeff Mosing got effectively no track time).

There was one red flag in the session.  This came in the final 10 minutes of the session when Capstone Motorsports’ Gary Ferrara and Belgard & Techniseal Racing’s No. 84 Audi of Alex Rockwell collided in turn 7.  The Capstone Mercedes ended up stopped on course briefly.  Both teams were back on track for the second session.

In TCR, Belgard & Techniseal Racing’s Denis Dupont was fastest in class with a lap at 103.341 mph, good for 24th overall.  Dupont’s lap was .108 seconds faster than Bryan Herta Autosport’s No. 77 Hyundai Elantra N TCR for Mason Filippi.  Ryan Norman in the No. 2 Hyundai was third, then the Audi of Road Shagger Racing’s Jon Morley.  Robert Wickens was fifth quickest.

Thursday’s practice session saw BGB Motorsports’ Spencer Pumpelly put his Porsche at the top of the chart early on.  Andrews ultimately set the quick lap of the weekend minutes into the session.  It ultimately held up to top the chart.

Andrews’ lap was .038 seconds quicker than Pumpelly.  Hindman was third fastest, doing everything necessary to bring the championship home.  Luca Mars was fourth in the lone KohR Motorsports Ford Mustang GT4, while Foley was fifth.

In TCR, VGRT’s Karl Wittmer was quickest in his Honda Civic with a lap at 103.708 mph, 24th overall.  Wittmer’s lap was three-tenths of a second faster than the similar Honda of LA Honda World Racing’s Mat Pombo.  Norman was third in his Hyundai, then KMW Motorsports with TMR Engineering’s Alfa Romeo for Tim Lewis Jr.  Mark Wilkins was fifth in the No. 33 Hyundai.

There were no red flags in the second session.  The only incident of note in the session was when Hardpoint’s Nick Galante went off-course in turn 3 in the closing moments of the session.  He was able to continue without issue.

Qualifying for the FOX Factory 120 is scheduled for 6 p.m. ET Thursday.  We will have a recap of the session and interviews with the class pole sitters here at Frontstretch.