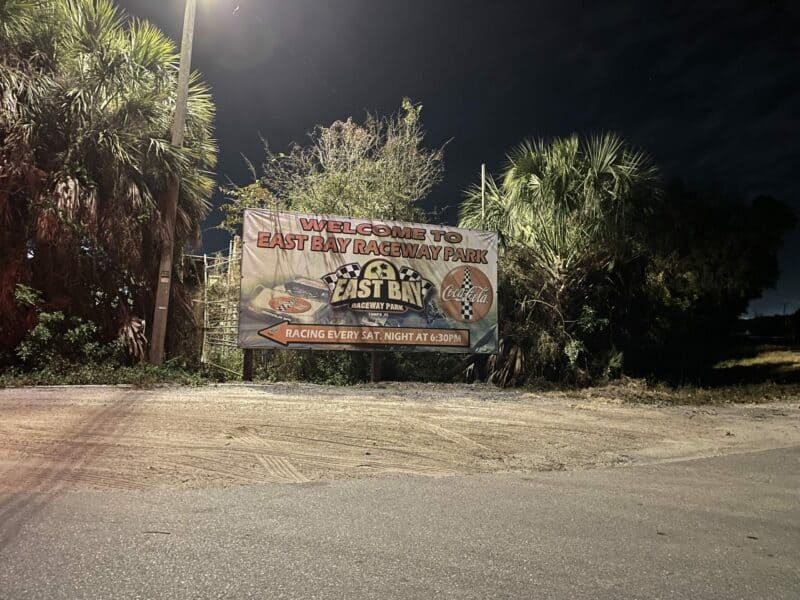 With Hurricane Ian causing widespread devastation across the state of Florida, racing is certainly a secondary concern and all of us on staff at Frontstretch are thinking of and praying for the Sunshine State this evening.

For those fortunate not to be dealing with the aftermath or impending landfall, here’s a recap of the impact the storm has already had across the dirt racing community.

1. Forget About Racing in Florida

Credit to Hendry County Speedway for having some humor about the very obvious reality that racing in the state of Florida is going to be on the back burner for a little while.

Volusia Speedway Park and East Bay Raceway Park have already canceled their weekend races, with All-Tech Raceway offering its parking lot up for anyone needing to move vehicles out of flood-prone areas. As for Hendry County Motorsports Park, the southernmost dirt track in Florida, it to the best of my knowledge is the most vulnerable dirt track to Ian’s landfall and I have yet to find any updates as to how the track weathered the storm.

2. We Still Have the Clay by the Bay

One piece of good news out of Florida is that venerable East Bay, which was expected to be smack in the middle of Ian’s path until the storm made landfall further south of Tampa, reported only minimal damage to the racetrack after the storm cleared out of western Florida.

With East Bay’s days numbered thanks to a pending sale to the mining company that surrounds the land it sits on, it was a welcome relief to hear the few years racers have left with the facility weren’t cut short further.

Perhaps the highest-profile cancelations caused by Hurricane Ian outside of Florida came on the World of Outlaws late model tour, which was forced to axe its scheduled race dates in South Carolina and Georgia this weekend.

Due to an unfavorable forecast from the impacts of Hurricane Ian, World of Outlaws @CaseCE Late Model Series and track officials have agreed to cancel this weekend’s events at @Cherokee_DirtSC and @SenoiaR.

With no mention of rescheduling in the series’ press release, the only real outcome of the schedule change is a further reduction in races for Tanner English to make up ground on Dennis Erb Jr., who despite being a Midwest-centered race team has run well in the South in recent years, including consecutive wins in WhyNot Motorsports Park’s Fall Classic and a runner-up finish in the National 100 last fall.

The World of Outlaws late models weren’t the only tour to see race dates get axed thanks to the storm. The Renegades of Dirt modified tour, slated for a four-race residency at Hidden Valley Speedway in Pennsylvania, opted to cancel the Fall Nationals over concerns about the challenges facing drivers and officials that would have to make their way up north for the weekend.

While Hidden Valley is a great deal removed from the Atlantic Coast, it’s worth noting that this isn’t an isolated rationale. The CARS asphalt late model tour also canceled their scheduled race at Ace Speedway this weekend for the same reason.

Georgetown Speedway, on the other hand, is much closer to the Atlantic Coast, so it came as no surprise that the Delaware track opted to postpone its scheduled weekend modified race to Oct. 27, a move that will create a three-day race weekend for the track headlined by the Short Track Super Series Elite race.

🌧 𝙒𝙀𝙀𝙆𝙀𝙉𝘿 𝙒𝘼𝙎𝙃: With the remnants of Hurricane Ian marching toward Delmarva, the 50th Camp Barnes Benefit Stock Car Race has been postponed to Thursday, Oct. 27. Friday night's program has also fallen to predicted wind and rain.

Selfishly, I like this move, as a Thursday night race at Georgetown is one I’ll actually be able to make in person.

6. One Hurricane Already Up North

And speaking of in person, I spent Thursday night catching the Lucas Oil Late Model Dirt Series at Tyler County Speedway for the rescheduled running of the Hillbilly Hundred. Among the drivers in the field Thursday (Sept. 29) was Jacksonville, Fla., driver Earl Pearson Jr., aka The Hurricane. Essex, as reported by MAVTV’s broadcast booth, caught one of the last flights out of Jacksonville before the airport was closed due to Ian’s impending arrival.