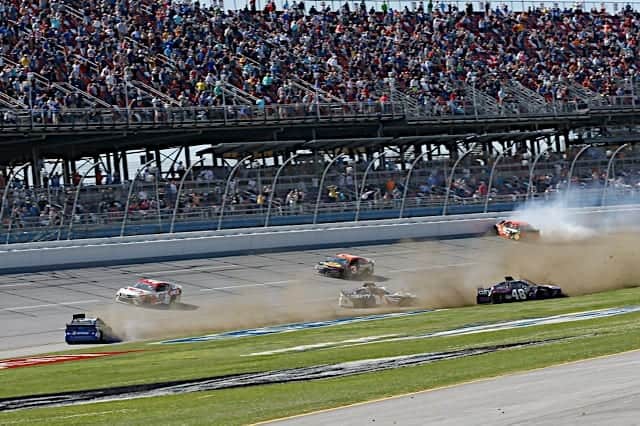 Talladega Superspeedway looms. October looms. Spooky season is here and it kicks off with NASCAR’s most feared racetrack … but there’s a ton of storylines, topics and concerns at the forefront of everyone’s minds going into race weekend.

Let alone NASCAR’s actual race and the playoff chaos that comes with it: safety concerns with the Next Gen car, the impact of Hurricane Ian, drivers sitting out and more headline the days leading up to a tripleheader postseason feature at the 2.66-mile superspeedway in Alabama.

Thursday (Sept. 29) brought the news that Alex Bowman would be sitting out after possibly one of the most innocuous, light-wall-tap crashes we’ve seen all season … and yet, the Next Gen’s viability has been raised into question once again. Texas Motor Speedway’s eternal race last weekend also gave us plenty to reflect on, from a driver spinning other under caution to another driver door-slamming a competitor in the vicinity of crew members and officials on pit road.

That all said, it’s a weekend of chaos, one whose 2021 edition featured all three premier NASCAR series races finishing with first-time winners in victory lane: Tate Fogleman in trucks, Brandon Brown in Xfinity and Bubba Wallace in Cup.

Since then, just one of those three has scored another victory, but I wanted to go back and reflect on all the playoff races at ‘Dega over the years.

“Bad Brad” needed a win to lock himself into the Round of 8, and he delivered. Despite leading just 12 laps all race long, the No. 2 was dueling with Ryan Newman as the field took the white.

Shockingly, despite the field fanning out three- and four-wide behind him and an underdog in Landon Cassill, driving for Hillman Racing, making a run on the outside, Keselowski held on for the win.

It remains one of the more clutch playoff moments, and we could only be so lucky that we got one of those — and a fantastic championship finale — in the bracket’s first year of existence.

Joey Logano won his first of two in a row at Talladega in this race and third event in a row that season, one of the more controversial results in a playoffs chock-full of feuds and divisive moments: this race ended up sandwiched between the Kansas Speedway event in which Logano spun Matt Kenseth and the Martinsville Speedway race in which the No. 20 paid the No. 22 back.

While the fans’ issues were more with Logano than anything, since Dale Earnhardt Jr. was leading late but NASCAR ruled that the No. 22 was out front at the time of caution. Criticism also arose when Trevor Bayne accused Kevin Harvick of wrecking him on a green-white-checkered restart.

Keselowski was looking to sweep the season series at ‘Dega, but his engine expired after 90 laps in a race antithetical to its spring predecessor in 2016: the earlier race had not one, but two flips with Chris Buescher and Kenseth, while a final-lap crash featured Harvick smashed against the wall.

Honestly, this one — another Logano win — might be remembered more for who didn’t win: good old Brian Scott.

Scott, owner of two Camping World Truck Series wins, had joined Richard Petty Motorsports in the No. 44 but struggled in 2016. ‘Dega, however, featured the No. 44 racing around behind Logano late, but lack of organization kept Scott’s car from making a run at the lead. His top five at Talladega — runner-up, to be specific — remains the only top five (and 10) of his career, period.

If one race from the past decade was going to be known as a wreckfest, it’s this one.

A total of 11 cautions marred the nearly four-hour affair, though the “Big One” didn’t happen until 17 to go, when contact between Martin Truex Jr. and David Ragan sent Kurt Busch into the outside wall and took a host of competitors with him.

Plus, 19 of the 40 cars were involved in the first five crashes, not even including that massive incident.

An unreal 36 of 40 cars were collected in one crash or another that afternoon: every time it seemed like the field was done wrecking or was too small to have another “Big One,” it happened again.

Keselowski survived the mayhem and won, which is becoming a trend in these playoff races.

Arguably one of the weirdest Talladega races, in which very little happened and all four Stewart-Haas Racing cars ran around pretty much untouched for a chunk of it. Aric Almirola ended up winning a race in which the SHR cars were so far out in front that the quartet led 155 of 193 laps.

The SHR brigade was about eight seconds ahead of fifth-place Logano right near the end of stage 1 and also led the field at the end of stage 2, though competitors stayed in contention a bit more that time around. Overtime-restart shuffling put Kurt Busch and Almirola as the preeminent SHR cars in the running order, and it was Almirola scoring his first flag-to-flag Cup win and second overall after teammate Busch ran out of fuel on the final lap.

My personal memories of this race outweigh anything else: with most of the race postponed to Monday due to rain, I’d queued it up on a stream in a class (I mean, come on, it’s Talladega) and got through most of it before the class ended (rest assured, I was also paying attention).

Brendan Gaughan’s infamous flip took place when a couple friends and I were glued to my phone in the student commons at VCU, and the subsequent cleanup allowed me to bolt to the library on campus for something else on my docket, where I watched the finish.

Between Talladega’s trademark “Big One” striking a couple times and the photo finish between Ryan Blaney and Ryan Newman, this was more of the more classic ‘Dega races in recent memory. Besides, who could forget Gaughan’s wildly upbeat interview after he’d just done a full 360-degree barrel roll in midair?

Maybe the wildest finish of them all, the bizarre pandemic-impacted 2020 season only got weirder at Talladega. This was a week before the insane monsoon race at the Charlotte ROVAL for the Xfinity drivers, but had a brand of mayhem all its own: when it was all said and done, only two playoff drivers finished in the top 10.

Jimmie Johnson was turned in the trioval at the end of lap 108, and contact with Kurt Busch sent the latter careening into the outside all and sailing through the air across the start-finish line. The No. 1 didn’t end up upside-down, fortunately, but did nearly land on top of Cole Custer.

Eventually, three overtime restarts led to a free-for-all on the final lap, where disorganization led to an every-man-for-themselves mentality among nine drivers: Matt DiBenedetto was out front, Erik Jones went high to block Buescher and hit the wall, DiBenedetto went down to block William Byron and the No. 24 hit the apron, Denny Hamlin went low to the apron to avoid it all … all in one of the most chaos-filled finishes in a long time.

Though it was rain-shortened, Wallace had never been a slouch at superspeedways, finishing runner-up at Daytona twice (and a third time since his first career win) and leading laps at Talladega on multiple occasions. Out front when the rains came, Wallace became the first Black driver in 58 years to score a Cup Series win, and followed it up with a flag-to-flag triumph at Kansas Speedway a few weeks back despite his first half of the 2022 season spotted by horrendous luck.

What will this weekend bring? First off, hopefully safe racing that’s still wildly entertaining in its own right. Talladega breeds chaos, but it feels like the best form of that right now is the controlled kind (well, as much as it can be at the superspeedway).

This year also marks 10 years since the 2012 fall race’s massive 25-car crash, where four-wide racing into the final corner led to an upside-down Tony Stewart, Kenseth sneaking through to win and title contender Keselowski somehow dodging mayhem to hold onto his championship hopes.