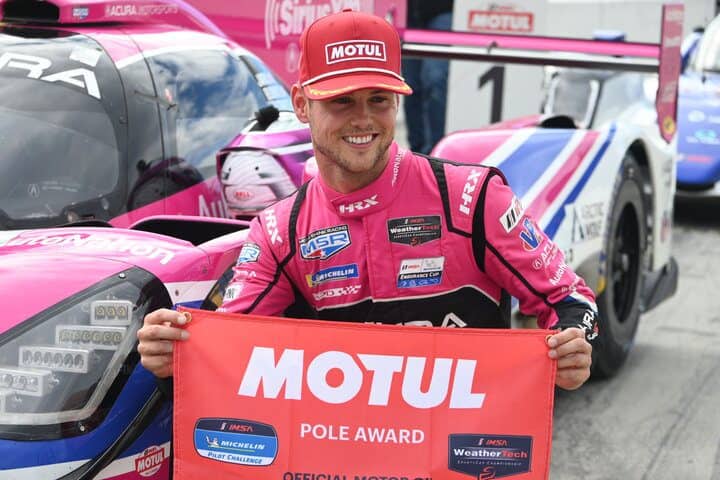 The championship duel between Meyer Shank Racing with Curb-Agajanian and Wayne Taylor Racing is fierce.  A mere 19 points separated the two entering the race.  Tom Blomqvist managed to cut that margin to 14 points by winning the pole for the Motul Petit Le Mans Friday (Sept. 30) with a lap at 133.382 mph.

“The boys and girls at [Meyer Shank Racing with Curb-Agajanian] gave a fantastic car today.  So I have to thank them,” Blomqvist told Frontstretch afterwards.  “I knew that if I had the car underneath me, I could get the job done.  Hugely thankful, but it’s only one part of the job done.”

Taylor was the first driver to drop into the 68-second bracket.  Blomqvist was able to answer that lap almost immediately.  That only made Taylor even more determined.  The results of that determination could have ruined the entire weekend.

Exiting the Esses, Taylor lost control of his Acura ARX-05 just as he was going to get on the brakes for turn 5.  The Acura swapped ends and went for a scary ride through the gravel trap.  Taylor ended up sliding to a stop on the other side of the trap on pavement.  He was able to continue, but his tires were shot, so he drove the car back to the pits.  The incident did not cause a red flag, so he did not lose his best laps.

Despite this incident, Blomqvist pushed on, unaware of the incident.  He bettered his time twice more before hitting his pole time.  The lap is not a track record as Dane Cameron qualified quicker in 2020.

Blomqvist’s lap was .233 seconds faster than Chip Ganassi Racing’s Earl Bamber.  Taylor’s quickest lap before his spin put him third on the grid.  However, he may have to drop to the rear of the class after his spin if the tires are damaged.  JDC-Miller MotorSports’ Tristan Vautier will start fourth, then Sebastien Bourdais in the second Ganassi Cadillac.

The only red flag of qualifying flew during the LMP3 session when Performance Tech Motorsports’ Dan Goldburg spun into the gravel trap in turn 6.  After Goldburg was pulled out of the trap, he continued in the session.  Normally, bringing out the red requires you to come into the pits, but that never happened here due to the IMSA officials’ judgment.  Goldburg still lost his two fastest laps and will start seventh in class.  Had he kept his best lap, he would be starting sixth.

In GTD Pro, it was VasserSullivan’s Jack Hawksworth who continued to show his single-lap might.  After topping the chart in two practice sessions Thursday, Hawksworth claimed the GTD Pro pole with the fastest GT lap of the weekend at 115.989 mph, 21st overall.

GTD saw Paul Miller Racing’s Madison Snow win the class pole with a lap at 115.574 mph, third fastest of all GT drivers.  He was nearly four-tenths of a second quicker than Robert Megennis in his Lamborghini for CarBahn Motorsports with Peregrine Racing.  NTe Sport’s Jaden Conwright will start third in his Lamborghini, then The Heart of Racing’s Roman DeAngelis, who is racing for the GTD title this weekend.  VasserSullivan’s Richard Heistand qualified fifth in the No. 12 Lexus.

The 25th Annual Motul Petit Le Mans is scheduled to go green at 12:10 p.m. ET Saturday afternoon.  Coverage of the event will start at Noon ET on NBC.  Check your local listings to see if your affiliate will be airing the NBC portion of the race

At 3 p.m., the race will move to Peacock as USA covers the NASCAR Xfinity Series at Talladega.  After the Xfinity race ends, the conclusion of the race will air on USA.