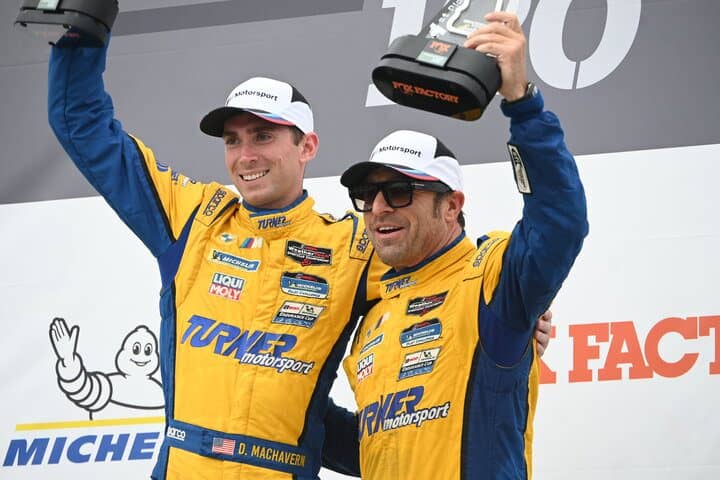 Turner Motorsport’s Bill Auberlen and Dillon Machavern proved nearly from the start of the race Friday (Sept. 30) that they had the car to beat.  A short pit strategy and strong pace gave them a 20-second lead at one point.  Auberlen was able to hold on to give himself and Machavern their second win of the year.

“The car was such a pleasure to drive [today],” Auberlen told Frontstretch after the race.  “I was able to just bang out the laps, one after another.  Then, you have to pull back and say to yourself, ‘Look, I might not be racing somebody now.  I might be racing them an hour from now.

“I put a little bit in reserve, then sure enough, the yellow came out.  You had to race.  Billy Johnson is one of the toughest guys you’re going to go against.  He does not like to lose.  Luckily, we had enough and crept away again [to win].”

Machavern started on pole in his BMW M4 GT4, but he quickly lost his advantage on the first lap to CarBahn Motorsports with Peregrine Racing’s Tom Dyer.  Dyer opened up a small lead over the first few laps before Machavern was able to reel him back in and get the lead back.

The real star of the early portion of the race was KohR Motorsport’s Luca Mars.  After failing to set a time in qualifying Thursday due to failing to return to his pit box during a red flag, then not serving the penalty quick enough, Mars went on a charge early.  After starting 24th, Mars was able to drive up into the top five in the first 35 minutes.

Machavern ended up pitting right at the 40-minute to put Auberlen in the car.  From there, Auberlen began to set a series of quick lap times that allowed him to put significant distance on his rivals.  Once the round of stops was complete, Auberlen had a legitimate 20-second lead over Johnson in the KohR Motorsports Mustang.

The leaders all made their final stops with about 50 minutes to go.  Auberlen was able to get past Accelerating Performance’s Justin Piscitell to take the lead a couple of laps afterwards.

The race’s sole full course yellow came with 40 minutes to go when NOLAsport’s Jason Hart collided with Bryan Herta Autosport’s Robert Wickens entering turn 1.  While Hart spun to the inside of the turn, Wickens went off through the gravel and backed into the tire wall.  Wickens was ok, but done for the day.

At the time, Piscitell hadn’t made his final stop, so he pitted here along with a few others and dropped back to the rear of the lead lap.  That put Johnson on Auberlen’s rear bumper with FCP Euro with Ricca Autosport’s Mike Skeen right there as well.

On the restart, Auberlen had to deal with significant pressure from Johnson at first, but eventually was able to pull away.  From there, Auberlen was able to hold on to take the win.

Auberlen and Machavern’s margin of victory was 2.081 seconds over Skeen and Trevor Andrusko.  Skeen was able to get past Johnson for the position with eight laps to go.  Johnson and Mars had to settle for third, then the two Riley Motorsports entries of Thiago Camilo and Alfredo Najri in the Toyota, then Anton Dias Perera and Scott Andrews in the Mercedes.

VOLT Racing’s Alan Brynjolfsson and Trent Hindman simply need to stay steady in the top 10 and they would win the title no matter what happened.  That is what transpired as Hindman brought the car home in sixth, giving the duo the Grand Sport championship.  It is Brynjolfsson’s first title and Hindman’s second (he previously won the title in 2014 at age 18).

In TCR, LA Honda World Racing’s Mat Pombo set a class record Thursday to win the pole and proclaimed to Frontstretch that given the team’s form, the rest of the field should be scared.  It appears that Pombo got a little trigger happy at the start.  He switched lanes before the start-finish line, which contravenes the rules.  That resulted in a drive-through penalty that dropped him out of the top 10.

Bryan Herta Autosport’s Harry Gottsacker took the lead as a result, but didn’t really have anything for teammate Mark Wilkins.  Wilkins took the lead while Rory van der Steur gave chase.  Van der Steur made a move for the lead at the chicane and contact was made.

Van der Steur slid off the course and nosed his Hyundai Veloster N TCR into the wall.  He then tried to draw a caution by staying stationary.  IMSA didn’t bite on this.  As a result, van der Steur ended up a lap down.

At the same time that the contact happened, one of the hood latches broke on Gottsacker’s car, forcing him to pit.  Points leader Taylor Hagler pitted out of sequence, likely in anticipation of a caution that never came.

The championship battle was effectively concluded when Roy Block was spun out in turn 7 by BGB Motorsports’ Thomas Collingwood.  The contact was a direct hit on the right rear wheel of Block’s Alfa Romeo.  This cut the tire.  Three-quarters of a lap later, Block spun again in turn 5.

Eventually, Block was able to get the Alfa Romeo back to the pits.  Unfortunately, the crew found some damage to the right rear suspension.  Block took the car behind the wall, and with that, the team’s chances at a title went right out the window.  They would eventually return to the race, but finished 12th in class, 25 laps down.  Block and Tim Lewis Jr. ended up second in points, 210 points back.

Pombo was able to recover from his penalty and get all the way back to the lead during a round of green flag stops.  Even though he ran long before pitting for tires, fuel and a driver change to Ryan Eversley, the team was able to retain the lead after the stops.

When the yellow came out, most of the TCR cars, including Eversley stopped.  That dropped him back to third.  VGRT’s Karl Wittmer had stopped prior to the yellow for a short pit and chose to stay out to take the lead.

The restart was nothing short of a charge in class as Eversley tried to dispatch of the Hyundais and get to Wittmer.  However, contact was made between Eversley, a slower Grand Sport car and Belgard & Techniseal Racing’s Denis Dupont.  Both Dupont and Eversley ended up in the grass and out of the hunt.

Wittmer ended up having to hold off Bryan Herta Autosport’s Stephen Simpson.  Meanwhile, Michael Lewis had taken fresh tires during the yellow and was charging to the front.  The last couple of laps were a fierce battle, but Wittmer was able to hold on to take his and team owner/driver Victor Gonzalez Jr.‘s second win of the year.

Wittmer and Gonzalez’s margin of victory was .420 seconds over Simpson and Michael Johnson.  Michael Lewis and Hagler drove up from outside the top 10 to third.  Pombo and Eversley recovered to fourth, while Road Shagger Racing’s Gavin Ernstone and Jon Morley were fifth.

Hagler and Lewis’ third-place finish was more than good enough to allow them to defend their TCR championship.  For Lewis, it is his third championship in four years.