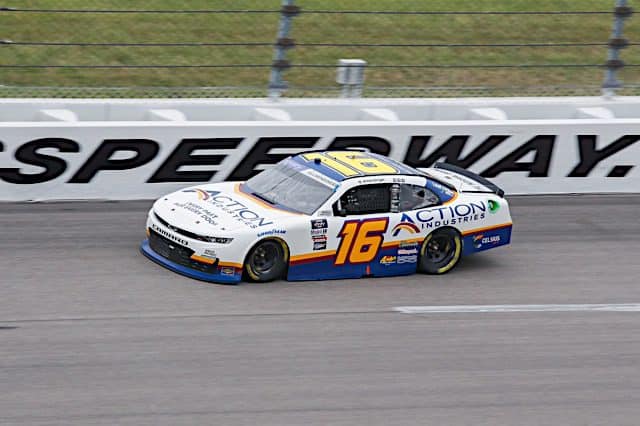 Allmendinger rallied past Sam Mayer, who led most of the final lap, sneaking past him just before the field crossed the finish line.

It’s the Kaulig Racing driver’s fourth NXS victory of the year and 14th of his career.

“Still hate [restrictor plate racing],” Allmendinger told NBC Sports after the race. “But gosh, we’ve been so close to winning one, I feel like I keep giving them away. Thought I might have gave it away. I’m still learning, trying to know what too big of a lead is.

“Honestly, all credit to Landon Cassill, he kept shoving me, he stuck with me. That’s what’s great about Kaulig Racing, when you got teammates like Landon, Daniel [Hemric], and you know no matter where you go they’re gonna go with you, makes it a little bit easier. So Landon, he’s gonna share it with me, but I wish we could both be the winner because he deserves it more than I do. Thank you to Landon. […]

“I just wanted to win a superspeedway, finally got it.”

Austin Hill led 61 laps, but got shuffled from the lead after getting to a third lane on the outside with less than four laps left. He ended up in 14th place at the end.

There was one incident that brought out the caution early.

Ty Gibbs got spun off the nose of Justin Allgaier’s car near the start of the race. The damage was minimal, though, and he continued on, eventually getting a seventh-place finish.

Later, with two laps to go, Myatt Snider cut a tire and had to drop out of the pack but the race stayed green.

In fact, most of the event was green, save for the two stage cautions and the aforementioned spin by Gibbs.

The final stage saw varying pit strategies that split the field into several groups. Jeb Burton and Anthony Alfredo came down pit road first with 45 laps left, while most of the Chevrolets pitted the following lap. Austin Hill came out first among that group.

Then the Toyotas made their way down pit road, allowing Bayley Currey to lead several laps before he and his teammates pitted. Unfortunately for him and Ryan Vargas, they sped on pit road and each had to complete a pass-through penalty.

As the laps wound down, some cars started jumping out of line with less than five circuits remaining. The pack eventually grew to three lanes, but Hill, who went to the outside lane, lost his help and dropped back.

The second lane didn’t appear to be as strong as the bottom lane, at least until the last lap when Allmendinger jumped out and ahead of Mayer for the victory.

Xfinity Results From Talladega for Sparks 300

Ryan Sieg is unofficially seven points above the cut line, while Daniel Hemric is seven points below heading into next week.

Whoever was responsible for not throwing the caution flag for the 31 spin to set up a GWC is now unemployed! There will not be a repeat for the Cup event.