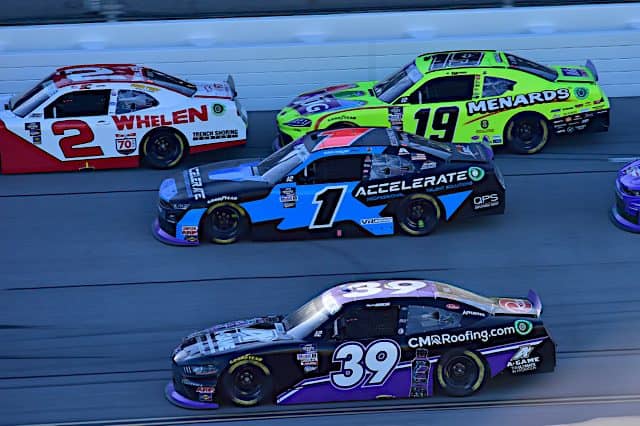 On pit road after Saturday afternoon’s (Oct. 1) Xfinity race at Talladega Superspeedway, Mayer sat next to his No. 1 JR Motorsports Chevrolet, knowing that another chance at his first win had escaped him. He finished a mere 0.015 seconds behind the race’s winner AJ Allmendinger.

“Finishing second at a place like this puts a weird feeling in your stomach,” Mayer said. “We were three feet short. Can’t do anything about that, unfortunately.”

But he wasn’t alone. Behind his parked car were the Nos. 39 and 10 of Ryan Sieg and Landon Cassill, respectfully. Both of whom are also winless in their Xfinity careers.

Sieg, who was close to winning his way into the Xfinity Series playoff Round of 8, finished fourth, his 16th career Xfinity top five. Despite coming close to winning his first race after nearly eight full Xfinity seasons of competition, the Georgian is still optimistic.

“I’ve learned a lot from these races,” Sieg said. “I feel like [that first win] is coming soon. I’m pumped. I feel confident we’re going to the Round of 8.”

Then, there was Cassill, who despite making 204 starts in Xfinity, still remains winless after Saturday. He had to settle for a third-place result and his fifth career top five.

Despite their results, all three drivers had a chance at winning on Saturday.

With one lap to go, Mayer led the Xfinity field into turn 1 with Sieg in tow. The JR Motorsports driver had pulled the No. 39 ahead of the rest of the field by almost three car-lengths before heading into the 2.67-mile circuit’s long backstretch.

But they were only stranding themselves on an island. The Kaulig Racing duo of Almendinger and Cassill led the charge of the bottom lane to catch and overtake the unsuspecting Sieg.

“I was trying to do all that I could do with [Mayer],” Sieg said. “I was trying to see which lane was going to go. I went high and then got a little shove and had to go back to the bottom.

“There was one time I could’ve got ahead of the No. 16 there, but it’s so tough to do that here.”

Mayer quickly cut to the bottom of the track to block the Kaulig tandem. It worked well.

The Nos. 16 and 10 checked up for one last shot at the lead as the field traveled onto the frontstretch for the last time, and it left Mayer all out on his own. The maneuver allowed Sieg to regain his momentum on the high lane.

The two lines were gaining fast on the weaving Mayer, who was trying desperately to block both quickly approaching lanes.

Finally, with a run, Allmendinger edged ahead of Sieg just enough to clear the No. 39 and make a run to the high side of Mayer. The Californian had help from Cassill, who used his momentum to push the No. 16 ahead of Mayer in the final 100 feet of the 300-mile race to win his first Superspeedway victory and his fourth Xfinity win of 2022.

RETWEET to congratulate @AJDinger for winning at @TALLADEGA! #NASCAR pic.twitter.com/0hewnHWfNG

Behind him was his Kaulig teammate Cassill, who finished third.

“I would’ve liked to see a hole open up for me,” Cassil said. “I was kind of boxed in there coming to the line.

“I wanted the bottom. That’s how I like this place. It’s the shortest distance. You can kind of shoot the middle if you have a gap. I didn’t really see an opportunity to do that. The bottom row moves forward. That’s really where I was committed.”

While it’s not a win for any of the three, there were still plenty of positives to take away.

For the rookie Mayer, it was a learning experience.

“It was a big learning day for me. It’s my first time ever doing something like this. Making it to the checkered flag at a speedway in the spot like that. Obviously, there’s a lot more days ahead for me. I’m looking forward to those days.

“Everything was kind of a surprise to me. Experiencing it once and feeling the car, the movement and moving lanes, it was a big learning day.”

For Sieg, it was a good points day. After all, he’s now seven points above the cut line heading into the Round of 12’s final race.

“All in all, it was a good points day,” Sieg said. “I feel pretty confident going [to the Charlotte Motor Speedway ROVAL] and doing our deal and advancing.”

Finally, for Cassill, it was a great day for his family of Kaulig Racing. He may not have won, but he still got celebrate in victory lane with his teammate.

“[The invite] means the world to me,” Cassill said. “We work really well together. AJ’s like a brother to me. Daniel [Hemric] and this whole Kaulig Racing team has been like family this year for me. I’ll definitely be there and see them.”

Let me get this straight. You can try to kill someone by intentionally wrecking them at 190mph and NASCAR doesn’t have a problem with that. But if you are a pit crew who goes after a runaway tire you get your card pulled and escorted off the race track immediately.