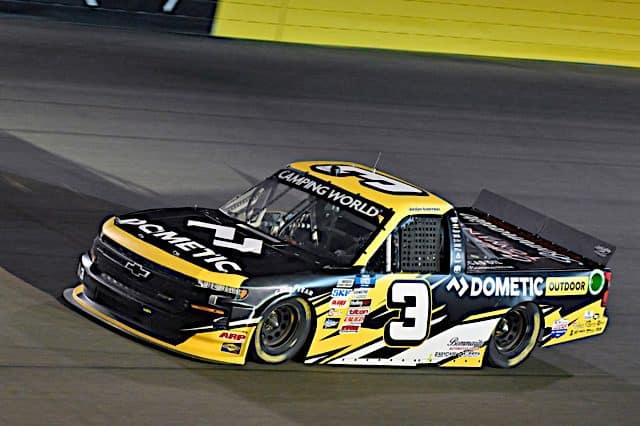 UPDATE: Anderson posted an update to his Twitter page on his condition and stated he had second degree burns across his neck, face, right arm, hands and both knees.

“So grateful for all the prayers and support,” Anderson said. “Have been in some great hands with all the NASCAR and UAB nurses and doctors. No doubt God’s hand was protecting me through that one. scariest moment of my racing career by far.”

He’s “getting cleared to go home tonight. Doctors say everything should be healing up within a few weeks.

“Will keep everyone updated on the healing processes but just thankful it wasn’t worse.”

UPDATE: Anderson is being treated for minor burns on his arm, neck and knees, as reported by NBC Sports during the NASCAR Xfinity Series race.

Jordan Anderson was airlifted to a local hospital in Birmingham, Alabama, after his truck caught fire during the NASCAR Camping World Truck Series race at Talladega Superspeedway on Saturday (Oct. 1), FOX Sports reported.

Anderson was running in the top 10 when the fire occurred. He tried to get it slowed down and off the racing surface. His truck hit the inside wall as he was getting out, and the safety crews tended to him.

He was then taken to the infield care center. A team member for the owner/driver, crew chief Artie Haire, told FOX Sports that he has some burns and was in a lot of pain. Haire will go to the hospital to be with Anderson.

An update on Jordan Anderson after his crash at Talladega Superspeedway. He is being airlifted to the hospital in Birmingham. pic.twitter.com/ECzr3XejgE

Anderson is being airlifted to UAB Medical Center, per Frontstretch’s Dalton Hopkins.

Jordan is being airlifted to UAB Medical Center pic.twitter.com/IWD98bUFf3

Anderson was running in his fifth Truck race of the year and first since the World Wide Technology Raceway at Gateway.

NASCAR shared an update during the race that Anderson was awake and alert.