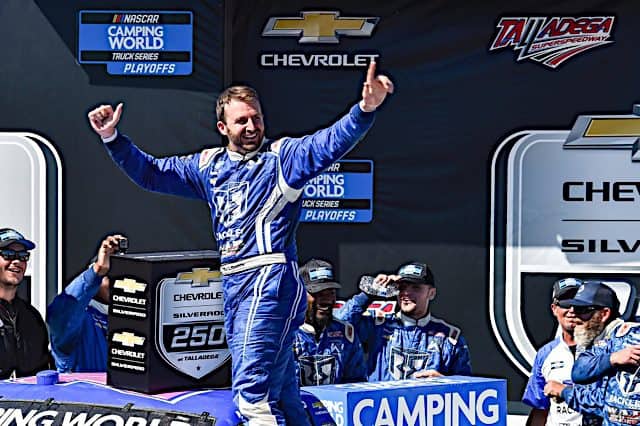 TALLADEGA, Ala. – At the end of the 2021 NASCAR Cup Series season, Matt DiBenedetto had lost almost everything.

For months after being told he wouldn’t be returning to his Cup ride with Wood Brothers Racing, the Californian and his family tossed and turned at night, worrying if he would even have a job in 2022. And even if he did, could he win?

After all, in eight years of near-full-time NASCAR racing, DiBenedetto had never won a race.

However, on Saturday afternoon, Oct. 1 at Talladega Superspeedway, the 31-year-old DiBenedetto became a NASCAR winner at last, 11 months after that uncertainty.

“Such a long time coming,” an elated and tearful DiBenedetto said on the frontstretch. “[My fans] have bared with me through so much and me being a reckless human being. I’m so grateful. I’m so thankful.”

It was a long-awaited milestone on a long and bumpy road for the journeyman racer.

For eight years, DiBenedetto juggled Cup ride after Cup ride with a number of teams, collecting the rare top 10 with each part-time year that passed. However, in 2021, his time and luck had run out. The fan-favorite Californian was set to be released from Wood Brothers at the end of the season in favor for the upcoming young talent of Harrison Burton.

The uncertain future left DiBenedetto and his family humbled and a little worried. How could he continue doing what he loved? Could he still be a race car driver? Would he even still be able to pay the bills?

“I’m so thankful for [my wife] and my parents,” said DiBenedetto. “We’ve grown so close over the last year. There have been a lot of tears shed throughout the years.”

It wasn’t until early January when DiBenedetto was contacted by Curtis Sutton, owner of Rackley W.A.R. race team, with an offer of a full-time ride in the NASCAR Camping World Truck Series. It was a risk for Sutton. After all, DiBenedetto had never won a NASCAR race on the national circuit before.

But the crew took a liking to him immediately, and DiBenedetto realized that sometimes less is more.

“I’m very blessed and thankful to be where I’m at and driving in the Truck Series,” said DiBenedetto, who had never turned a lap in the Truck Series until February at Daytona International Speedway. “Even my parents and my wife were saying, ‘You know, this is kind of your forte. Driving for small teams. Building a family environment.’

“When you talk to [team owners Curtis Sutton and Willie Allen] and the business and family environment they do, there is no halfway doing anything with them.”

For most of his first full-time Truck season, DiBenedetto scored the occasional top 10 but never really got close to that coveted first win.

He didn’t care. He was finally having fun.

“It’s a completely different atmosphere than the Cup Series,” DiBenedetto said. “This just feels like home to me. We are a family. We’ve had a lot of ups and downs and had a lot of things not go our way. Man, it’s hard not to get frustrated with some of that.

“But I’ve been grateful I’m with this team. I’ve made a home here.”

However, the No. 25 team finally had an opportunity to get that first win at Talladega on Sunday. After an overtime restart with one lap to go, DiBenedetto was sixth and shoving Alabama native Bret Holmes with all of his might, praying for an opening.

It arrived. In the tri-oval, Holmes flew to the outside of leader Ben Rhodes as DiBenedetto elected to go low. Rhodes attempted to block the 31-year-old and shoved him below the yellow line. DiBenedetto, however, was undeterred.

Then mayhem erupted behind them, and the caution flag waved.

Holmes and DiBenedetto arrived at the start-finish line simultaneously, but race control was forced to review video to determine the winner.

DiBenedetto sat in his truck on the frontstretch apron of the 2.67-mile circuit alongside the No. 32 of Holmes as the NASCAR world held its breath, waiting to find out which driver had earned his first career win. With each radio mic key, Dibenedetto jolted in anticipation. After eight years of near-full-time NASCAR competition, this was the closest he had ever been to winning his first career race. Finally, after minutes of waiting, DiBenedetto was given the word.

At long last, he could celebrate.

“I started doubting myself,” laughed the new winner. “Then, I was nervous. As soon as I heard the mic key up, I’d be like, ‘Uh! Oh no, still nothing. It felt like an hour.”

Maybe it did feel like an hour. But after waiting eight years, an hour doesn’t sound so bad.

NASCAR screws it up again. I like Matt but to throw the Caution seconds before the real winner crossed the finish line! Pathetic!