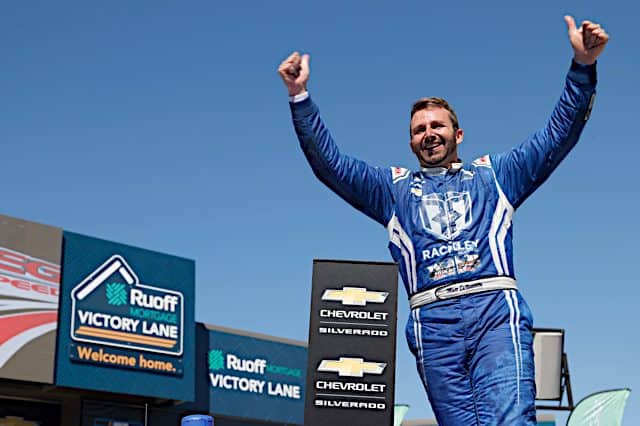 DiBenedetto won after the caution flag came out during overtime on the last lap. Corey Heim got hit from behind by Tyler Ankrum and came back down into the field to bring out the final yellow flag.

Bret Holmes crossed the finish line first, but after a few minutes, NASCAR declared DiBenedetto the winner at Talladega as he was leading when the caution lights came on. It’s DiBenedetto’s first win across all three NASCAR national series.

“Oh man, such a long time coming. …” DiBenedetto told FOX Sports. “My spotter, Doug Campbell, is awesome. We work together so good. I think in the Cup Series we led on like the white flag twice here or something at Talladega.

Holmes was credited with third, behind Ben Rhodes, who was leading coming to the frontstretch. Ryan Preece and Christian Eckes rounded out the top five.

“It’s tough to lose something that close,” Holmes told FOX Sports. “We lost the ARCA [Menards Series] race here that close. I don’t know, probably lost it closer today. I wanted to win here so bad, I can’t stand it. I’ve got so many people here from my hometown, my friends and family. Just growing up racing in the dirt track across the road. It’d mean the world to me to win here.

Besides the finish, some wild moments occurred during the race, starting off near the end of stage one.

Jordan Anderson’s truck caught fire while he was in the top 10. He tried to slow down enough to get out, and as he started to climb out, his truck hit the inside wall. He was airlifted to a local hospital in Birmingham, Alabama, after suffering some burns, his crew chief told FOX Sports. NASCAR later told FOX Sports he was awake and alert.

NASCAR reports that Jordan Anderson is awake and alert after this scary crash at Talladega. pic.twitter.com/z3qe4VpWWz

Stage one ended under caution, and John Hunter Nemechek took maximum stage points as the leader.

Shortly after stage two started, Colby Howard blew a tire and spun, bringing out the caution. No harm was done though, and he pitted and got fresh tires.

Then, Lawless Alan cut a tire and darted hard into the outside wall. Bryan Dauzat also had some damage to the front of his truck, as did Alan’s Niece Motorsports teammate Carson Hocevar. However, the latter’s damage was from a piece of debris that wedged in the nose of his No. 42. His team worked hard to get the debris out, and he eventually got up to the front of the field.

Stage two was won by Chandler Smith, but not before he incurred damage to the rear of his truck. On the final lap of the stage, Zane Smith blew a tire and also had some right rear damage.

Varying pit strategies separated the early front runners, allowing for someone like Holmes to get up front and lead a few laps. Unfortunately, he got shoved out of the bottom lane into the middle and fell back. Eckes and Hocevar also fought for the lead in both lanes.

As much of the field went down pit road around lap 63, Hailie Deegan came in too hot into her pit stall and a tire carrier fell down. As a result, the tire rolled off into the grass, and after the remaining trucks passed by, the crew member ran out to grab the tire while the green flag was still out. FOX Sports reported that NASCAR pulled his hard card after the incident and escorted him off of the premises.

As a result of him going out to retrieve the tire, the caution flag waved again. Deegan went on to score her career-best finish in sixth.

The race restarted on lap 69, with Hocevar and Eckes once again battling for first. They maintained the front two spots all through the following two caution periods, the first for another Howard spin and the second for a larger crash.

On lap 79, Grant Enfinger cut a tire and immediately went into the wall, bringing Austin Wayne Self with him. Johnny Sauter and Tanner Gray also slid up into the outside wall with Enfinger and Self.

Hocevar and Eckes were once again in the front, but with about five laps to go, Hocevar had a right rear tire go down and had to get out of line on the apron. He then spun out by himself and stayed there, bringing out the yellow flag. NASCAR held him a lap for intentionally bringing out the caution.

Then in overtime, a big crash ended the race just before the field crossed the finish line on the frontstretch. DiBenedetto was declared the winner after NASCAR reviewed the finish.

The points are very tight near the cut line heading into the next race. Unofficially, Rhodes is just two points above the line, while Friesen is two below.

The Truck Series will run its penultimate race of the season at Homestead-Miami Speedway in three weeks. The Baptist Health 200 airs Saturday, Oct. 22, at 1 p.m. ET on FOX Sports 1.

Throwing a yellow flag 100 yards from the finish line coming down for the checker flag is the stupidest decision in auto racing. I don’t care what kind of wreck was happening. None of the drivers are going to slow down anyway with the checker flag in their sight.