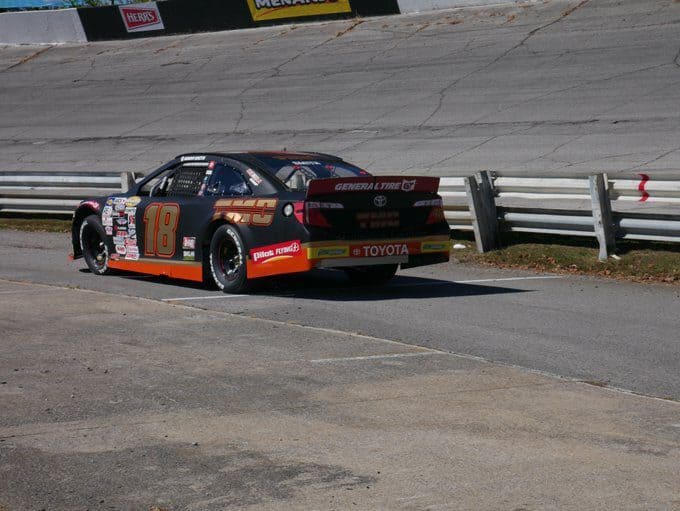 Sammy Smith was perfect at Salem Speedway on Saturday (Oct.1). He tied for the fastest time in the practice session, won the pole, led every lap and won the ARCA Menards Series’ Herr’s Snacks 200.

Smith picked up his series-leading fifth victory of the season in the process, also his fifth career ARCA win. Smith won the series’ most recent race, entering Salem, at Bristol Motor Speedway.

“It was a good day overall,” Smith told MAVTV pit reporter Mike Massaro after climbing out of his No. 18. “Just thanks to all these TMC [Transportation] guys, Flying J, Allstate Peterbilt [Group] and all these guys for bringing me an awesome car. Glad we were able to get another win this year.

“Preparation and I think it’s pretty close to Winchester [Speedway] as well,” Smith said when asked what contributed to his success. “So it was a good day overall and glad we were able to win. Frankie and Frank [Kimmel] both have a lot of experience here and I was able to lean on Frankie a lot, so thanks to him and I’m glad we were able to win. It’s a pretty cool historical track.”

Fastest in practice ✅
Win the pole ✅
Lead every lap ✅
Win the race ✅@sammysmithSS DOMINATES on his way to victory in the Herr's Snacks 200 at Salem Speedway!@MAVTV | @FloRacing pic.twitter.com/Eiqi6cFrYd

Smith’s attention now turns to Toledo Speedway. Though it’ll be his first career start at the track, his mindset is similar:

Smith led all 200 laps at Salem, becoming the second driver to lead every lap at an ARCA event in 2022. Jesse Love is the other to accomplish that feat, as he led every lap at the 1-mile dirt track at the Illinois State Fairgrounds. Coincidentally, Love finished second to Smith at Salem.

“I was going for all I was worth […] man, I’m definitely bummed out, kind of at a loss for words, I gave it every last bit I had,” Love said post-race. “[Team owner] Billy Venturini did a great job spotting and coaching me up. [Crew chief] Shannon Rursch made great adjustments. I think we were better [today] than we were last year and we won, but we missed it a little bit compared to the No. 18 [Smith]. So we know where we’re a little bit off and we’ll work on it for sure.

“I drove it every last bit I had. About scraped the wall in [turns] three and four and [turns] one and two, it’s so different; you have to hit your marks every time. I think in the last stage I missed them twice. It’s so easy to get up hung on that seam. I was about ready to throw water bottles out the window trying to get a caution. I was doing everything I could. We were just a little bit off today compared to the No. 18 so we’ll come back stronger next time. I’m looking forward to the next one.”

In his two career ARCA starts at Salem, Love has finished first and second, respectively, winning the 2021 race.

Daniel Dye finished third and gained three points on points leader Nick Sanchez with only one race left in the 2022 ARCA season. Dye rebounded from falling one lap down, then returned to the lead lap via the lucky dog during the first competition caution.

“We didn’t start off very good but my GMS Racing team just fought hard all day [and] made good changes,” Dye said post-race. “Super cool to come out of here a lap down to put this Halifax Health-Solar Fit Chevrolet on the podium and gain three points in the championship fight. So going into Toledo is going to be pretty fun.

“Oh man, I guess to do this again,” Dye added about his mindset for the season finale. “Just got to keep fighting, make good changes, worry about ourselves, and hopefully it’ll shake out the way we want it to.”

Sanchez finished sixth. His standings lead shrunk to two points as the ARCA season will conclude in one week (Saturday, Oct. 8) at the 0.5-mile Toledo short track.

There were only two cautions in the penultimate ARCA race of the season. As a result, only six drivers finished on the lead lap.

Bryce Haugeberg rounded out the top 10 in 10th place, which tied his career-best ARCA finish.

The ARCA season wraps up with the Shore Lunch 200 at Toledo on Oct. 8. The 200-lap race will take place at 4 p.m. ET with TV coverage provided by MAVTV Motorsports Network and available on FloRacing.