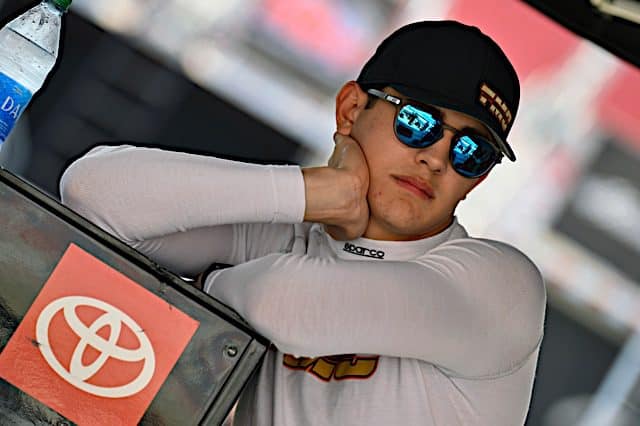 After winning the most recent ARCA Menards Series event at Bristol Motor Speedway, Sammy Smith won the pole award for the ARCA event at Salem Speedway on Saturday (Oct. 1).

It’s Smith’s eighth career pole ahead of his his first career start at the 0.555-mile short track. He also tied for the fastest time in the practice session earlier on Saturday.

Smith will lead the 20 drivers to the green flag in the Herr’s Snacks 200 later on Saturday. Because only 20 drivers were entered, all successfully made the 200-lap race.

Will Kimmel, Conner Jones, Landon Huffman and Greg Van Alst round out the starting top 10 in seventh through 10th place, respectively.

Nate Moeller and Amber Balcaen did not run a qualifying lap. They will start in 18th and 19th place, respectively.

During the practice session, Tim Richmond backed his No. 06 into the wall, sustaining serious damage to the racecar.

Heavy damage to the No. 06. @ARCA_Racing practice Still under red at Salem. pic.twitter.com/tgh6lyAA25

Richmond did not participate in qualifying and it appears unlikely he will compete in the race later on Saturday.

The ARCA competitors will begin their race at Salem at 4 p.m. ET, with TV coverage provided by MAVTV Motorsports Network and available on FloRacing.