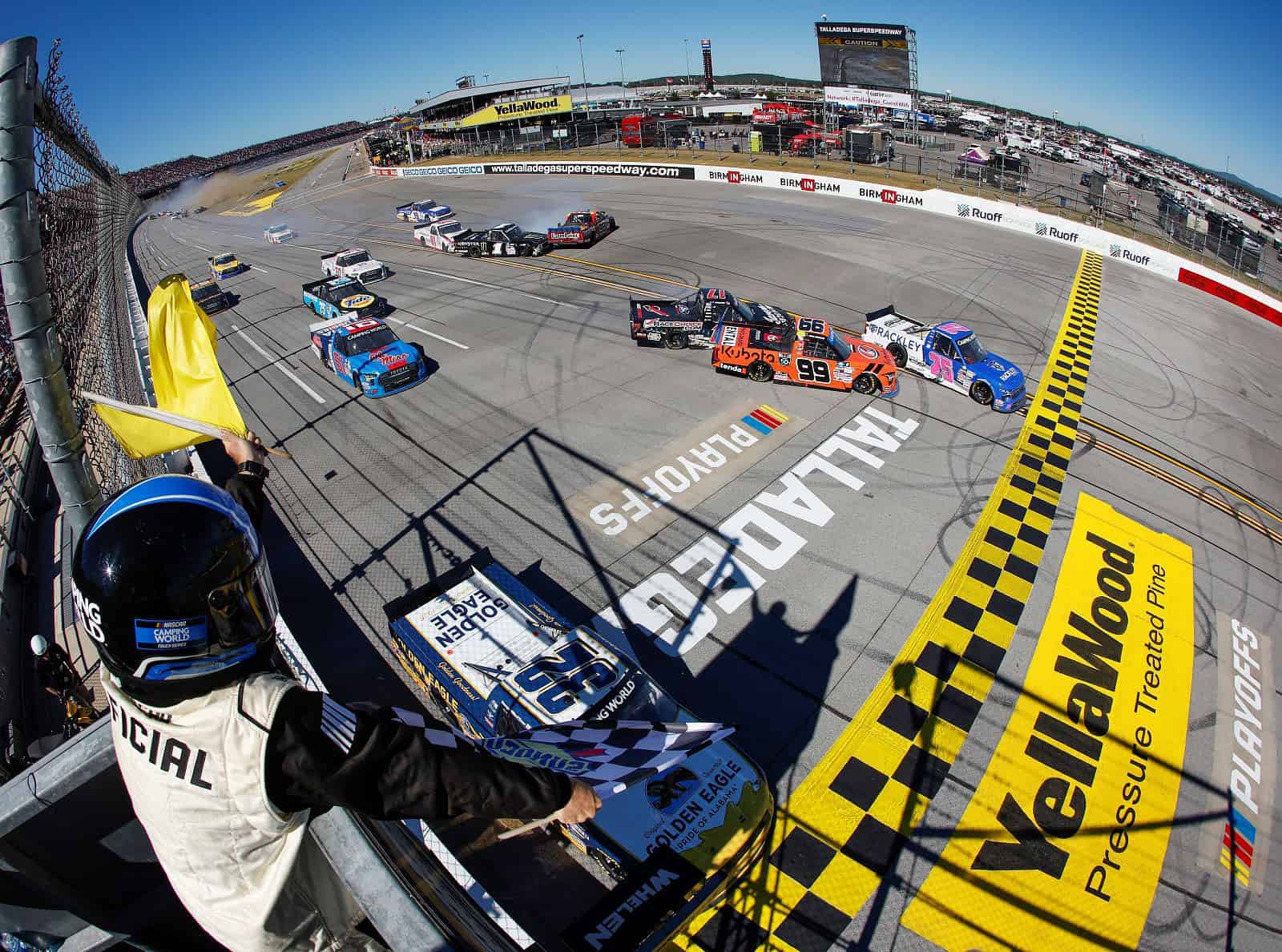 Matt DiBenedetto finally did it. After years of journeyman driving, the Grass Valley, California native brought home his first career win in NASCAR’s premier series, doing so at Talladega Superspeedway on Oct. 1.

The win is also the first for Rackley-W.A.R.,f in its second full-time season in existence.

Playoff driver Ben Rhodes and hometown hero Bret Holmes rounded out the top three – remember that for later. A last-lap crash brought out a caution that froze the field mere feet from the start-finish line, causing controversy in an otherwise tame playoff race.

On lap 18, fan favorite Jordan Anderson entered turn 1 when his engine expired and caused the truck to burst into flames. Immediately, Anderson threw the window net down and worked on getting out, despite the truck continuing to travel through turn 2 and coming to a screeching halt against the inside wall (but not before smacking it driver-side first).

NASCAR reports that Jordan Anderson is awake and alert after this scary crash at Talladega. pic.twitter.com/z3qe4VpWWz

Anderson finally was able to escape his burning No. 3, but collapsed to the ground in pain. He was airlifted to the University of Alabama-Birmingham medical center for further treatment.

Jordan is being airlifted to UAB Medical Center pic.twitter.com/IWD98bUFf3

His crew chief, Artie Haire, told FOX Sports 1 that Anderson was dealing with burns, which Anderson himself confirmed later in the evening via Twitter.

A scary situation for sure.

Hailie Deegan came with what seemed like the entire pack to pit road on lap 64 for her final pit stop. However, so many trucks came down pit lane that Deegan was forced to the middle and had to make a hard left turn into her pit stall, which was the first one on the pit lane.

Luckily, she didn’t hit any drivers. Unfortunately, she ran into her tire carrier, who fell down. The incident launched the tire across pit road (which everyone somehow managed to avoid) and into the frontstretch infield.

But not only was Deegan going to be penalized for an uncontrolled tire, NASCAR was also forced to throw the caution – surprisingly, not because of the tire, but after one of her crew members ran clear out into the infield to retrieve the tire.

In response, NASCAR pulled the crew member’s hard card and escorted him out of the track.

That was a bad idea. NASCAR pulled this Hailie Deegan crew member's credential and escorted him from the track. pic.twitter.com/tQKwjgOspd

Despite this, Deegan rebounded and finished sixth, a career-best finish in the Truck Series.

The first major multi-car accident of the day came with 16 laps to go, when Grant Enfinger blew a tire and got hit from behind by Austin Wayne Self, collecting Tanner Gray and Johnny Sauter in the process.

The damage to his truck left Enfinger finishing a disappointing 29th, and he now leaves Talladega 29 points out of the championship 4 with just one race remaining in the Round of 8.

The crash ended the days of Self and Gray, while Sauter was only able to salvage a 25th-place finish after running up front most of the afternoon.

As mentioned at the beginning of this column, a last-lap crash brought out a caution that ended the race. Corey Heim tried to make a move on Christian Eckes as they entered the tri-oval but instead got pushed into the outside wall by Eckes on an attempt to block.

Heim smacked the outside wall and tried to keep it high but lost control and spun back to the inside. He was hit in the nose by the No. 9 of Blaine Perkins, and other trucks spun to avoid or piled into the crash as well.

But as that crash happened, the leaders were streaking to the finish line when Holmes made a move to the outside of Rhodes. When Rhodes went up to block, DiBenedetto forced his way to the inside. Rhodes and DiBenedetto came together, with DiBenedetto going below the double-yellow line (neither were penalized for this).

As the two of them traded paint to the line, Holmes swung outside to avoid any kind of collision and ended up being the first driver to cross the line, beating DiBenedetto by 0.002 seconds. Meanwhile, Rhodes, DiBenedetto and several others crashed and slid across the line, along with the competitors involved in the Heim wreck seconds prior.

Because DiBenedetto is not a playoff driver, no one new locked themselves into the championship 4 by virtue of a win, leaving Ty Majeski as the only driver to do so. Chandler Smith is the only driver sitting comfortably, as he has a 30-point cushion over fifth-place in points. Smith was the stage 2 winner at Talladega.

Zane Smith is third, 18 points above the cut, and Rhodes holds the final spot by a mere three points over both teammate Eckes and Stewart Friesen.

Behind Eckes and Friesen is stage 1 winner John Hunter Nemechek, who sits five points out despite winning a stage. Enfinger rounds out the field, 29 points back with just one race remaining before the championship.

A shoutout is in order for Parker Retzlaff, as he was able to keep his nose out of trouble in his Truck Series debut, and although he wasn’t the highest finishing rookie – that would be Kaden Honeycutt – he still managed to finish a respectable 16th. Not bad when your series debut is at a chaotic track.

It wasn’t too shabby of a day for Ole Miss Rebels. The Rebels upset the Kentucky Wildcats in college football, just hours after one of the school’s former students, Chase Purdy, drove his Ole Miss No. 61 to an impressive seventh-place finish, even leading six laps on the day.

Somewhere, Eli Manning is smiling – it was apparently a great day to be a Rebel.

Before Majeski and three other drivers can compete for a championship, one more race stands in their way – Homestead-Miami Speedway. The last race in the round of 8 will decide who will make the championship 4 in a month’s time.

The trucks will head to Homestead in three weeks’ time on Saturday, Oct. 22, where race coverage will begin at 1 p.m. ET on FOX Sports 1.