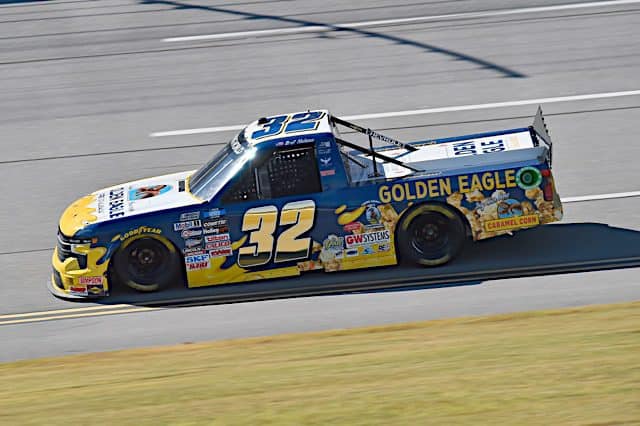 TALLADEGA, Ala. – To the heart, Bret Holmes is a weekend warrior.

During the week, the Munford, Ala. native works for his family’s construction business, but Holmes also races in the NASCAR Camping World Truck Series on a part-time basis and was within an eyelash of a rousing victory less than 20 minutes from his hometown in Saturday’s (Oct. 1) Chevrolet Silverado 250.

“I didn’t get my hopes up, we lost an ARCA race that close and were even closer this time,” Holmes said. “We lost an ARCA race by five 1000ths of a second. We were fortunate enough to stay out of trouble all day, the lanes kept going forward and pushing really well.”

Added Holmes: “I was hopeful to begin with, but the longer it took, it kind of went downhill.”

The manner in which Saturday’s early-afternoon event appeared to be playing into the hands of Holmes, especially as the field restarted with two laps to go and the white flag was displayed. Holmes did anything that a driver seeking a win can do at a restrictor-plate track – get in position to win on the final lap.

Especially since the start/finish line at Talladega is past the tri-oval.

“Throwing a caution there before the start/finish, that doesn’t make a lot of sense,” Holmes said. “It’s just tough to lose one that close. I don’t know whether to cry or be happy, we had a good run.”

Holmes admitted that Saturday afternoon was bittersweet as the track at Talladega and those that work there hold a special meaning to his family.