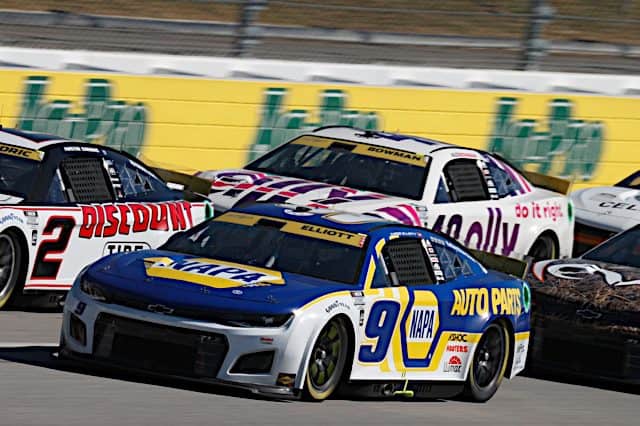 The streak is over at four.

On Sunday (Oct. 2) at Talladega Superspeedway, in a YellaWood 500 that saw 57 lead changes, the most of any NASCAR Cup Series race this season, Chase Elliott became the first playoff driver to win his way through into the next round, claiming his fifth win of the season, the 18th of his career and his second at Talladega. The victory ended a run of four consecutive non-playoff winners, with three drivers who failed to make the postseason sweeping the Round of 16 and the just-eliminated Tyler Reddick winning last week at Texas Motor Speedway.

Restarting third in line on the bottom lane with two laps to go, it was a perfectly-timed move to jump to the outside and pick up a push from fellow Chevrolet pilot Erik Jones that gave the second-generation Most Popular Driver the track position and help to mount a charge on the closing lap, pulling past the dominant Ford of Ryan Blaney and blocking him all the way to the checkered flag.

ELLIOTT EDGES BLANEY AT THE LINE TO WIN! #NASCARPlayoffs pic.twitter.com/NOzWSv9WyX

“That’s unreal,” Elliott told NBC Sports from the start/finish line. “Moments like that, you have to really cherish, and you [fans] are what makes this special to me, so thank you sincerely […] It was a wild last couple of laps, you know. I wasn’t crazy about being on the bottom, and fortunately I got just clear enough off of [turn] 2 to slide up in front of Erik [Jones] and he gave me some great shoves […] Just had a good enough run to get out front and was able to stay far enough ahead of Ryan [Blaney] at the line to get it done.”

“I thought about [throwing a block],” Blaney reflected from pit road, after coming up 0.046 seconds short to his longtime friend. “The middle, the second lane was the strongest, definitely the second half of the race. I thought about it, but […] when you go to the middle and you don’t have a Ford or a teammate behind you, your chances of getting split are so high. As much as I trust Chase, I don’t trust him not to take me three-wide and leave me in the middle. I just chose to stay down in front of Michael […] he was giving me great shots, I was just a little bit too late […] Overall not a bad day.”

With a shot at a good day for playoff and non-playoff drivers alike, there was fighting at the front all throughout stage one. Polesitter Christopher Bell lost the lead immediately to Aric Almirola, who traded the top spot back and forth with Chastain, Suarez, Jones, Elliott, Kyle Busch and others.

Entering turn one on lap 24, Harrison Burton jumped in front of Ricky Stenhouse Jr. in the outside lane. Stenhouse moved up to the bumper of the No. 21, sending Burton spinning in the middle of the pack, collecting Joey Logano, Cindric, Noah Gragson (standing in for Alex Bowman in the No. 48), Justin Allgaier (who replaced Gragson in the Beard Motorsports No. 62) and Ty Gibbs.

Ricky Stenhouse Jr. gets into the back of Harrison Burton. #NASCAR pic.twitter.com/IfOdf9kzax

Burton and Gibbs took their cars behind the wall. Both young racers were checked and released from the infield care center, while all other drivers involved were able to continue.

After a caution for Corey LaJoie’s flat right-front tire, Denny Hamlin fended off charges from Cole Custer, Elliott and William Byron. But in the end, a shove from Cindric sent Talladega master Blaney rocketing by on the outside, stealing the stage win by 0.009 seconds in a three-wide photo finish.

The second stage stayed green the whole way through, despite a slide and near-miss for Bell entering pit road.

The 2️⃣0️⃣ goes for a slide entering pit road! pic.twitter.com/6uSNiyaBpV

While Hamlin, Blaney, and other big names bailed out of the pack early, Reddick and Kyle Larson traded the lead back and forth in the closing laps of the stage. But in the third turn on the white-flag lap, Reddick bailed up the track after running out of fuel. Once again in the tri-oval, a last-lap move sealed the stage win as Elliott ducked to the outside of Hendrick Motorsports teammate Larson.

A textbook move out of @chaseelliott to score the stage victory! #NASCARPlayoffs pic.twitter.com/96v2v8QcZK

After the final set of green-flag pit stops cycled through with 26 laps to go, Blaney retook the lead with drafting help from Chastain. With 19 remaining, Jones went to the front with drafting help from McDowell. With Jones on the bottom and Blaney in the middle, the two ace pack racers traded the top spot lap after lap until the caution for Daniel Hemric’s No. 16 (and a small fire in the infield) restacked the field for the final run to the finish.

With Elliott clinching a spot in the next round with the victory, that leaves 11 drivers fighting over just seven transfer positions with a week to go in the Round of Eight.

'@chaseelliott is LOCKED IN to the Round of 8! 🔐

One race to go in the Round of 12. #NASCARPlayoffs pic.twitter.com/gBSSiYl7IE

While top-five finishers Blaney, Chastain and Hamlin are all 20 or more points ahead of the cut line, no drivers are truly locked in on points. Chase Briscoe currently owns the final transfer spot on tiebreaker with Cindric, while Byron sits just 11 points back following a 12th-place finish. Bell’s second consecutive week of struggles leaves him in a likely must-win scenario 35 points back, while Alex Bowman, who sat out Talladega with concussion-like symptoms, is scored 54 points back in an almost-certain must-win.

The NASCAR Cup Series round of 12 concludes next Sunday (Oct. 9) with the Bank of America ROVAL 400 from the Charlotte Motor Speedway road course, airing at 2 p.m. ET on NBC.