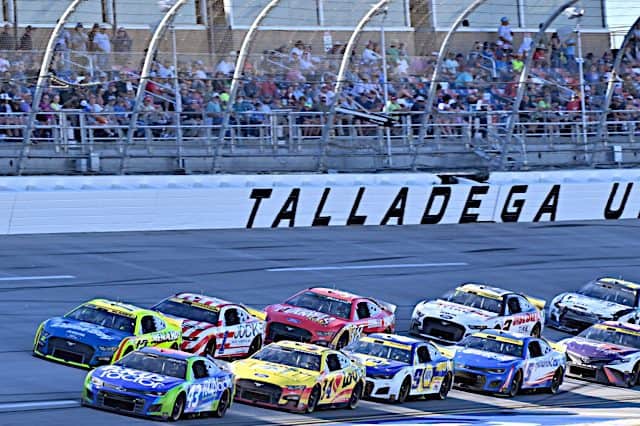 Talladega. It is the racetrack where either dreams come true or nightmares become reality. It is 188 laps of intensity, aggression and increased heart rate in anticipation of the Big One.

It also may just be a place where the underdog always has their day.

At the 2022 YellaWood 500 (Oct. 2), continued side-by-side action and strong pushes continued to keep the Big One lurking around every turn. However, it never came, a safe race helping assuage increasing concerns surrounding driver safety.

The wild unpredictability of the Talladega draft also opened the door for another underdog win there. But this time? A 2021 Daytona 500 Cinderella story came up just short in his bid for Cup win number two.

Indeed, Michael McDowell has become one of the more renowned superspeedway drivers in the field despite piloting underfunded rides for most of his career. That was on display once again, as McDowell’s third-place finish mirrored that of the 2021 Talladega spring race.

After finishing outside the top 20 in the first two stages, McDowell came to play as the laps wound down. As NBC Sports commentator Dale Earnhardt Jr. acknowledged, the Fords appeared to be the best pushers in the field. McDowell certainly backed that up, his bright yellow No. 34 becoming a fixture at the front during the closing stages.

After saving his equipment and hanging toward the back for most of the final stage, McDowell played his hand with just over 20 laps remaining. Cracking the top-five contenders, the duo of McDowell pushing Erik Jones on the inside line became the top’s biggest threat, constantly swapping hands for the lead like a game of chess.

With six laps to go, Daniel Hemric experienced engine issues and stalled on pit road, bringing out the caution. McDowell was scored in third and lined up as the second car on the bottom for the final restart. Who would he push? Fellow Ford driver and the dominant one in the final stage, Ryan Blaney.

For one and three-quarters of the final two laps, the pairing did everything right from start to finish. The only issue? A slight gap from McDowell to Blaney, due in part to the drivers behind the No. 34, allowed race winner Chase Elliott to shut the door. One last heave from McDowell to Blaney came up just short as the Front Row Motorsports driver settled for third.

RETWEET to congratulate @chaseelliott for winning at @TALLADEGA! #NASCARPlayoffs pic.twitter.com/PpuNIoSHYp

If you review last spring’s finish at Talladega, it was deja vu for McDowell, though he was the one being pushed. McDowell received a boost from William Byron in the tri-oval but didn’t have enough to get around Brad Keselowski and finished third.

The 37-year-old continues to improve on a career year, scoring his 12th top-10 finish, including his second top five. It was also his fifth finish of 11th or better in the last seven Cup races. But just like Blaney said about himself after the race, McDowell will likely be replaying the finish in his mind several times.

“It’s good to be there at the end and have a shot at it,” McDowell said after the race. “Just disappointed.”

Much like the icon of the No. 43 in Richard Petty, Erik Jones has become a consistent threat at superspeedways. Just like we saw in the spring race in Alabama, Jones put himself in position to win when it counted.

He was leading on the final restart with Ross Chastain lined up behind him. After being cleared by Blaney, Elliott moved up to receive a push from Jones. The No. 43 stuck to Elliott’s No. 9 all the way to the frontstretch on the final lap.

The Byron, Mich. native then gave Elliott what would be the winning push entering the tri-oval. Unfortunately for Jones, the momentum didn’t carry him along, allowing Chastain to put the No. 43 in the middle. Jones would slide back to sixth at the start/finish line, the exact position he also finished in after losing the lead in the tri-oval back in the spring.

Despite missing the playoffs, Jones has three top 10s in the five playoff races, including his win at Darlington Raceway to open the postseason.

A little further back, for the second time this season, Front Row Motorsports landed both of their drivers inside the top 10 as Todd Gilliland finished in seventh. It’s the first time in the team’s history both drivers have finished in the top 10 in the same race multiple times during a single season.

While McDowell played it safe for most of the race, Gilliland was arguably the most impressive rookie, establishing himself as a fixture at the front of the field. The No. 38 driver also led a lap early in the race, marking an interesting stat for the rookie.

Gilliland raced with nothing to lose and a win to gain, as he noted while racing around playoff drivers who had a lot to lose. He was a big part of the outside train in the final stage, pushing Chastain, who was himself pushing leader Blaney. The peanut-themed No. 38 played a part in the finish, too. A push from Gilliland to Chastain advanced the energy forward that eventually got Elliott the win. It was another impressive performance from a rookie who’s had a quietly consistent first season adapting to the sport’s top level of competition.

A day after coming up just short of his first NASCAR Xfinity Series victory, Landon Cassill earned stage points and came home with an 11th-place finish for Spire Motorsports. Cassill finished fourth in the last superspeedway race at Daytona International Speedway, producing yet another strong result in the underfunded No. 77. The result is Cassill’s third top 15 in 13 Cup starts this year.

Justin Haley overcame damage sustained in a lap 25 incident, the only major one of the day, to place 15th. The No. 31 had tape covering the nose of his Kaulig Racing Chevrolet but ran inside the top 10 for a large part of the final stage. The late caution and restart pushed Haley back in the field a bit, but it was a nice recovery that backed up a strong third-place finish a week ago at Texas Motor Speedway.

While there weren’t many wrecks in the race, a couple of underdogs fell victim to Talladega. To start that lap 25 wreck, Ricky Stenhouse Jr. bumped Harrison Burton, upsetting Burton’s No. 21 Ford. Burton then spun in front of traffic, collecting several cars.

Along with Haley and Stenhouse, Justin Allgaier was involved. Allgaier drove the No. 62 Chevrolet for Beard Motorsports after the team’s original driver, Noah Gragson, had to substitute in Hendrick Motorsports’ No. 48 for an injured Alex Bowman. The crash relegated Allgaier to 30th place, two laps off the pace.

Later on in the first stage, on lap 45, Corey LaJoie saw his race end when he cut a tire entering turn 1. The crash placed LaJoie in 35th, snapping a two-race streak of top 15s during the playoffs.

Erik Jones (sixth): “We had a good day today at Talladega. Our FOCUSfactor Chevy was fast all weekend. We were able to push and be pushed when needed and stay up front most of the race. I thought we had a good shot at the win and put ourselves in the right position on the final restart but unfortunately, the guys behind us had some issues and we didn’t get the push we needed on the final restart.

“Frustrating ending for sure, but we’ll take it and move on. I’m proud of the progress this No. 43 team and everyone at Petty GMS has made this season. It’s fun to drive cars like this and have a shot at the win.”

Todd Gilliland (seventh): “It is great to be disappointed with a seventh-place finish. The No. 38 Georgia Peanuts Ford handled really well in the draft and we were able to make some great moves to get us up front. My guys did a great job on pit road all day to keep us in line with the lead pack. We’ve had some speed these past few weeks without the results to show for it, so it is great to come away with a top-10.”

Justin Haley (15th): “It was a decent day. We had good recovery after some early damage and even made it as high as second. I thought we were ready to go there at the end, but when it came down to it, we just kind of rode around and were in a bad position.”

Ty Dillon (23rd): “Uneventful day on our Sunseeker Camaro. We tried to play it smart and stay out of what I thought would be the inevitable Big One, but it just never happened. That’s like the first time in about 11 superspeedway races that we haven’t had a Big One. But, I’ve been successful being smart in these races. Eventually, it’s going to get you, but I’ll play that game more times than not.”

Daniel Hemric (34th): “Such a disappointing way to end a really good run. We had a fast No. 16 Celsius Camaro and even finished the second stage in the top 10. Ultimately, we had en engine issue which took us out early. I’m bummed for that to be how I finished my schedule in the Kaulig Racing No. 16 car, but we will take it and move on.”

Darlington Raceway is one of the toughest tracks in NASCAR, hence the name “The Track Too Tough to Tame.” Sometimes, the attrition and mental grind of the race opens the door for an underdog to score an upset win.

A few drivers established themselves as the cars to beat during that Darlington event. Kasey Kahne won the pole and led the most laps with 124. Kyle Busch led 78 laps and Kevin Harvick would lead 47. The late stages of the race saw Carl Edwards come to the front; he led a total of 57 laps on the night.

The race featured 11 cautions, but it was the 10th that turned the complexion of the race. With Edwards, Kahne and Harvick leading the way, the yellow flew for Jeff Burton‘s motor failing. Darlington is very hard on tires, and the leaders opted to pit for two tires mostly.

However, Furniture Row Racing driver Regan Smith stayed out on track with old tires. Another caution flew for a tangle between Busch, Harvick and Bowyer that would create quite a scene post-race. However, Smith stole the show in the No. 78 Chevrolet, holding off Edwards to earn his first career Cup win.

The victory was the first for FRR, who would go on to have 18 victories at the Cup level and earn the 2017 championship with Martin Truex Jr.

It was a toss-up between peanuts and Sunny D for the top scheme, but the juice wins in the end. Stenhouse carried the bright orange, yellow, and blue Sunny D colors on his No. 47 Chevrolet this weekend. Sunny D has been a longtime partner of Stenhouse, leading to their schemes being among the fan favorites. The “juice bottle” cracked a little bit in the lap 25 crash when Stenhouse hit Burton, damaging the splitter. However, the Olive Branch, Miss. native would soldier on to finish 22nd.