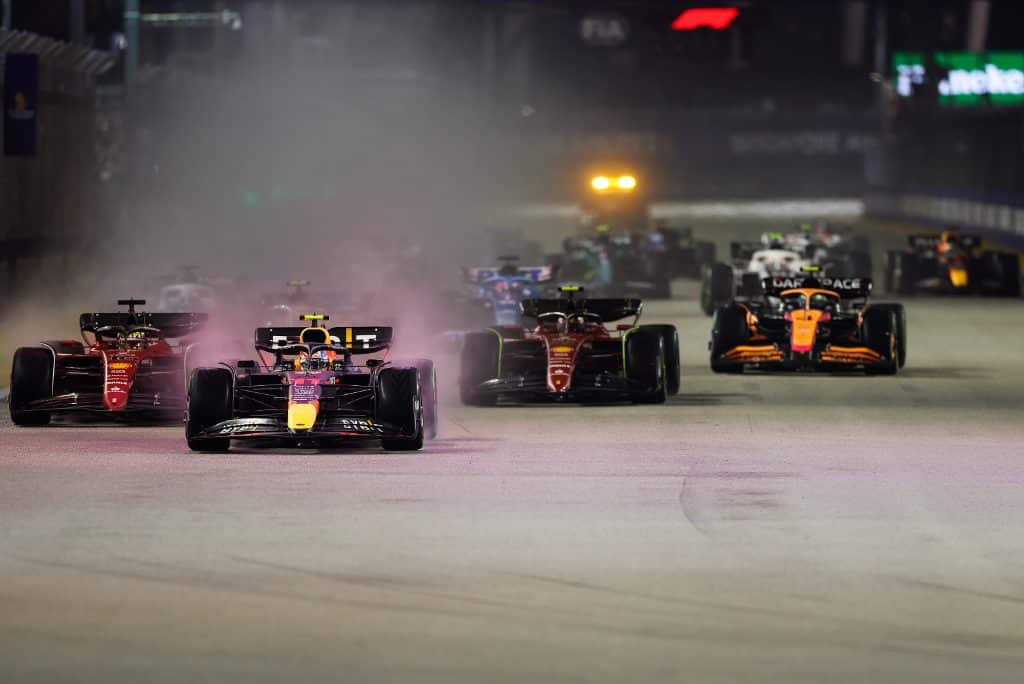 For better or for worse, Max Verstappen’s winning streak was stopped at a tally of five races during Sunday’s (Oct. 2) Singapore Grand Prix, though the trophy will still be coming back to Red Bull in the hands of one Sergio Perez.

Having won the Monaco Grand Prix over Memorial Day weekend, Perez has now achieved his first multi-win year in Formula 1, with both wins coming on technical and demanding street circuits. Perez was followed closely by Charles Leclerc, who was the Mexican driver’s only competition throughout the humid evening.

After a series of fumbles and failures from Ferrari, the prancing horses finally looked to be on pace with the Red Bulls, at least on one side of the garage. While Leclerc was able to keep Perez honest – particularly after the field switched to dry tires with little over a half hour remaining in the race – Carlos Sainz had been gapped by Perez and Leclerc by five full seconds by the time the fourth lap started, and that trend held throughout the evening until Sainz came home in third place eight seconds adrift of Leclerc and nearly 16 seconds behind Perez.

Two full safety car periods and three stints under virtual safety car conditions saw six retirements in total. On top of the aforementioned Alpine engine failures, Nicholas Latifi and Zhou Guanyu both retired with damage after colliding on the sixth lap, while Yuki Tsunoda and Alexander Albon both retired after single car incidents.

By virtue of finishing seventh, Verstappen’s title campaign will have to last at least one more week, with both Perez and Leclerc remaining mathematically eligible for the title, bold as the writing on the wall may be.

By virtue of the circuit being engulfed in torrential rain, the race start was delayed by an hour, with the entire grid starting the race on intermediate tires. The result of this delayed start was a wet, and slowly drying track that pushed the intermediate tires to the edge of their being while also offering zero incentive for any runners to make the switch to slicks.

Zero runners except George Russell, who opted to strap on a set of mediums on lap 23. Losing time hand over fist, Russell’s Mercedes slithered around the track a whopping four seconds off the pace. Only 13 laps later, however, the script had flipped and Russell was setting purple lap times as more and more teams decided to that ice skating was probably faster than canoe paddling. Pit road came alive with activity on lap 35, only for Tsunoda to plant his AlphaTauri in the turn 10 barriers, triggering a safety car and allowing McLaren to execute their lucrative pit strategy.

By the time racing resumed, race control had to instate a race timer to ensure that the event would be checked off within its allotted two hour frame.

With 36 minutes on the clock, Verstappen’s night which opened with a poor start and lack of forward progress was punctuated by a massive lock up into turn 7 which flat spotted the Dutchman’s tires and forced him into another pit stop for fresh rubber. Despite managing to carve his way back to a seventh place finish, nothing about the Marina Bay circuit  was kind to Verstappen on Sunday.

Big lock up from Verstappen at the final restart 😵#SingaporeGP #F1 pic.twitter.com/5wgMm1O8Kb

Perez’s domination of the event following a fantastic getaway serves as a needed high point in a bipolar season for the Red Bull sophomore, who to this point had finished fourth or worse in 50% of his starts this season. Taking a win may keep him in title contention, but the win itself will be the cake beneath the icing for Perez, regardless of whether he finishes the season first or second in points.

Singapore has finally returned to the calendar following a two year absence in the wake of the COVID-19 pandemic. Bahrain and Saudi Arabia having their respective merits, sure, but the atmosphere of the first F1 night race is hard to beat. With former winners Sebastian Vettel, Fernando Alonso and Lewis Hamilton all in or around the midfield, a new winner was a virtual given heading into the event. In this respect, two drivers who had no previous victories in Singapore did battle throughout the race without any controversy or misconduct on track. An honest race for the win through and through.

Though the race held true to its reputation of being something approximating a safety car manufacturing facility, no major on track incidents occurred and everyone walked away from the event safe and healthy – the physical and mental strain brought on by the combination of Singapore’s notorious heat and humidity can’t be understated here.

No legitimate reasons for complaint here.

Speaking of Singapore’s humidity, track drying crept along at a snail’s pace when left to its own devices. Cars could be seen squirming on corner exit every lap, long after the rain had moved along to greener pastures. Though a moist – not dry – line appeared on the track quickly enough, Russell, the only driver to switch on to dry weather tires before lap 35, paid for his mistake in the form of a 50 second gap to the car in front.

The odd conditions on track left many, including Martin Brundle in the commentary booth, wondering why race control had yet to enable DRS when conditions were clearly fair enough for dry tires, slow as they may have been.

Even without DRS, the fact that the track managed to dry without actually drying for so long meant that most of the field found themselves playing chicken with pit strategy. Who pits first? You. No, you. On and on for the better part of 20 laps. Racing is racing, but the return of such a unique track to the calendar would have benefited from a more straightforward race.

On track incidents between Zhou and Latifi, Russell and Mick Schumacher left a foul taste in a few mouths. At this point it’s likely part of the deal with street circuits that even the smallest incident may require a safety car to properly rectify; fair enough, that’s part of the flair. Sometimes the flair simply loses some of its spark so far as the racing product is concerned.

Tsunoda’s accident in particular raised legitimate concerns over whether or not the barrier would need repairs before racing resumed. A few extra miles per hour and the race may have been ended prematurely with the race clock already counting down. Hamilton likewise found the barriers, though promptly corrected his direction and carried on. Street racing can be bittersweet.

Another lap, another car in the barriers!

Russell and Verstappen will have to get together and settle their differences at an individual level regarding who had the more adventurous night. Either way, no one should walk away from this race bored if they followed either driver throughout the night.

Verstappen’s continuously blistering pace was on display during the race’s second half, regardless of what the results may say. To carve back the time and track position to get from 12th to seventh around Singapore is no laughing matter.

Russell’s evening moved along in a more abrasive manner. First suffering through the growing pains of running mediums on a horribly greasy track, to an on track run in with Schumacher, then to finally setting the fastest lap of the race while running two laps down – it’s difficult to say what’s going through the Mercedes man’s head after that one.

Nobody was more expressive throughout the entire weekend than Verstappen after being made to abort two flying laps during Saturday’s qualifying. After it came to light that the Red Bull driver’s car was under-fueled, and therefore in breach of FIA regulations, the team ordered Verstappen to abort two consecutive laps that would have been pole position times.

“What the f***? What the f*** are you guys saying? Unbelievable, mate. I don’t get it. What the f*** is this about?” Verstappen exclaimed over the radio as the checkered flag fell in qualifying.

“Schumacher’s driving like it’s the race of his life, crikey!”