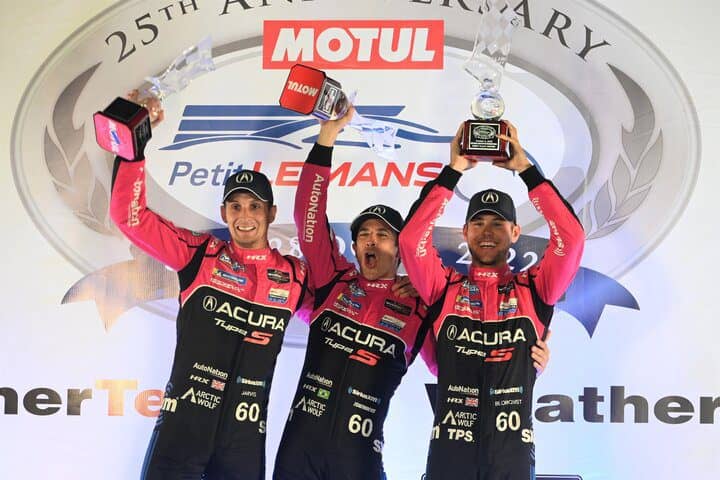 BRASELTON, Ga. – Meyer Shank Racing with Curb-Agajanian’s pit crew proved to be the difference Saturday night (Oct. 1).  They were able to get Tom Blomqvist out ahead of Wayne Taylor Racing’s Filipe Albuquerque on the final round of stops.  From there, Blomqvist staved off Albuquerque until contact with a lapped car forced Albuquerque to retire.  Blomqvist held on to not only win the Motul Petit Le Mans for himself, Helio Castroneves and Oliver Jarvis, but also win the final DPi championship for himself and Jarvis.

“My engineer came on the radio [and said] that [Albuquerque] was four seconds back,” Blomqvist said during the post-race press conference.  “I cleared a [lapped car] just before turn 4, but as we know, the Esses is not somewhere you want to get stuck behind a slower car because you can lose two or three seconds just like that.  I thought I had got through and he got held up behind, then I heard he was in the pits with damage.”

Meyer Shank Racing with Curb-Agajanian’s Tom Blomqvist led from the pole, but quickly ended up in a battle with Chip Ganassi Racing’s Earl Bamber.  Meanwhile, DPi points leader Ricky Taylor made a stop at the end of the first lap to change tires and dropped way down the order.  Why?  If you remember, Taylor spun his Acura ARX-05 at turn 5 during qualifying on Friday.

Taylor and Filipe Albuquerque entered the weekend with a 19-point lead over Blomqvist and Jarvis, less than the difference between first and second-place points.  Blomqvist winning the pole dropped that margin to 14.  Had Wayne Taylor Racing elected to change the damaged tires, they would have been stripped of the 30 points that they earned for qualifying third.  They would have unofficially lost the points lead before the race even started.

Bamber was able to snatch the away on lap 6 and pulled away to a decent advantage.  He then nearly threw it away when he had contact with AF Corse’s Simon Mann, who ended up off-course.  Bamber ended up with a warning from the stewards.

The early part of the race was a bit caution-plagued.  CarBahn Motorsport with Peregrine Racing’s Robert Megennis stalled on-track early on to draw the first caution.  Unfortunately, that issue could not be fixed, resulting in the No. 39 Lamborghini being out after completing 22 laps.  The yellow more or less bailed out Taylor, who was able to catch up.

The Chip Ganassi Racing Cadillacs seemed to have the most speed and led comprehensively early in the race.  However, they also used more fuel, which caused problems as the race went on.

Another team that was on the ball as well was JDC-Miller MotorSports with their Cadillac.  The team led the race overall with Richard Westbrook behind the wheel.  Shortly after Loic Duval got in the car, he came across the GTD Lexus of VasserSullivan’s Aaron Telitz.  Duval made an aggressive move to get past and contact was made.  As a result, both drivers spun down the hill and went hard into the tire barrier.  Both Duval and Telitz walked away from the crash, but they were out on the spot.

The race ultimately came down to the worst-case scenario.  With 45 minutes to go, Chip Ganassi Racing teammates Bamber and Renger van der Zande collided entering turn 1 while fighting for position.  The two cars slid off-course and hit the tires to bring out the yellow.  Both were able to continue after being pulled out, but ended up multiple laps down.

The yellow brought the leaders to the pits for their final stop of the night.  Blomqvist had a fuel advantage over Albuquerque and thus needed less fuel to get to the finish.  As a result, Blomqvist went from 11 seconds behind Albuquerque before the yellow to right in front of him after the stops.

After the restart, Blomqvist pulled out to nearly a four-second lead on Albuquerque.  However, slower traffic cut into the advantage.  With 13 minutes left, Albuquerque was right on Blomqvist and ready to pounce.  However, contact with a lapped car broke a rear suspension piece on Albuquerque’s Acura, ending his day and his championship chances.

Blomqvist held onto the advantage over Action Express Racing’s Pipo Derani until Winward Racing’s Philip Ellis nosed his Mercedes into the tires exiting turn 1 from third in GTD.  Ellis was unable to get his car restarted, forcing IMSA to throw the yellow with five minutes to go.  As a result, Blomqvist rode past behind the safety car to take the win.

Derani, Olivier Pla and Mike Conway finished second in the only other car on the lead lap.  The Ally Cadillac of Jimmie Johnson, Kamui Kobayashi and Mike Rockenfeller were a lap down in third.  The No. 01 Ganassi Cadillac of van der Zande, Sebastien Bourdais and Scott Dixon ended up four laps down in fourth after their late crash.   The No. 02 of Bamber, Alex Lynn and Ryan Hunter-Reay was fifth.

In LMP2, PR1 Mathiasen Motorsports’ Steven Thomas started on pole, but his teammate Ben Keating was making waves in gaining on the No. 11.  He was able to take the advantage during the first caution and led a number of laps early on.  However, a penalty put the team down the order.  Later, the team’s second crash of the weekend ended their day.

Ultimately, the race came down to Tower Motorsport’s Louis Deletraz and DragonSpeed’s Juan Pablo Montoya.  Deletraz, who has been a sensation both in IMSA and in the European Le Mans Series, turned in some of the fastest LMP2 laps of the whole weekend in order to hold off the former Formula 1, CART, INDYCAR and NASCAR driver.  Ultimately, the final caution was all that was necessary for Deletraz, John Farano and Rui Andrade to take the win in fifth overall.

Farano wins the LMP2 championship by virtue of his victory and an automatic bid to the 2023 24 Hours of Le Mans in the LMP2 class.  Farano  fully intends to take up the bid as he stated during his press conference that “…the car is already on order.”

In LMP3, Riley Motorsports was quite strong early on.  Then, Felipe Fraga slid off course and nosed into the tire barrier in turn 6.  The incident did not bring out the caution, but cost Fraga the lead to Andretti Autosport’s Josh Burdon.

While the crash in the seventh hour was not the pass for the win, it did remove Riley Motorsports from contention.  The trio of Burdon, Jarret Andretti and Gabby Chaves led most of the rest of the way and held on to take the class victory.

Andretti Autosport’s margin of victory was 2.409 seconds over JrIII Racing’s Ari Balogh, Garret Grist and Nolan Siegel.  Sean Creech Motorsport’s Joao Barbosa, Malthe Jakobsen and Nico Pino were third.  Fraga, Gar Robinson and Kay van Berlo ended up a lap down in fourth after leading most of the first half of the race.  CORE autosport’s Jon Bennett, Colin Braun and George Kurtz were fifth.  The fifth-place finish was enough to earn the championship for Bennett and Braun, their first in the IMSA WeatherTech SportsCar Championship.

Petit Le Mans saw the GTD class defeat GTD Pro for the first time.  Keating’s crash into the tires exiting turn 4 triggered a massive shake-up that resulted in the top 11 GTD cars jumping in front of the GTD Pro leaders.  This status actually held up for the remainder of the race as the top five finishers all beat the GTD Pro winners.

The early hours of the race were dominated by Paul Miller Racing’s BMW.  Later on, a couple of teams that failed to set times in qualifying came to the forefront.  Those teams were Turner Motorsport and Gradient Racing.

According to Auberlen, the team’s BMW M4 GT3 had a computer issue that nearly caused the team to be unable to race.  However, it was rectified and allowed them to drive up the order.  Gradient Racing described their issue more vaguely.

Mario Farnbacher and Kyffin Simpson were both turning in very quick lap times that allowed the No. 66 Acura to move up into contention.  Simpson, a 17-year-old racer out of Indy Lights, had the fastest lap in the class for much of the race before being usurped in the last hour.

The race ultimately came down to Farnbacher and Simpson racing hard over the final three hours with Inception Racing’s Jordan Pepper and Sebastian Priaulx.  Pepper was every bit as quick as Farnbacher in the closing laps, but he was unable to get past.  Farnbacher was able to hold on to take the victory for himself, Simpson and Till Bechtolsheimer.  It is Gradient Racing’s first-ever victory in the IMSA WeatherTech SportsCar Championship.

Pepper and Priaulx had to settle for second.  Teammate Brendan Iribe wasn’t even around for the finish as he had to fly to Spain after completing his drive time to compete in Sunday’s Fanatec GT World Challenge Europe Powered by AWS Endurance Cup three-hour race at the Circuit de Catalunya-Barcelona.

In the championship, neither of the primary contenders had good races.  Team Korthoff Motorsports dealt with electrical problems that resulted in the Mercedes shutting off multiple.  Stevan McAleer, Dirk Mueller and Mike Skeen ended up sixth.

The Heart of Racing’s Roman DeAngelis entered the weekend with a 45-point lead over McAleer.  He didn’t have the best race, but DeAngelis, Ian James and Maxime Martin brought the No. 27 Aston Martin home in seventh, good enough to take the title.

In GTD Pro, VasserSullivan’s Jack Hawksworth started from pole and led early, a continuation of the form that he had showed in practice.  However, Risi Competizione came to the forefront in the last couple of hours.

Daniel Serra was able to run down Hawksworth and take the lead with 18 minutes to go.  From there, the Ferrari of Serra, James Calado and Davide Rigon won the race on the road.  Unfortunately, they ran afoul of the regulations.

There are two drive-time rules in effect.  One is that every driver outside of the DPi class must complete a minimum of 150 minutes in the car (in DPi, the minimum is only 45 minutes).  However, in all classes, no driver can drive for more than four hours in a six hour period.  Daniel Serra violated the second rule and Risi Competizione had their win stripped.

For most of the teams, the IMSA WeatherTech SportsCar Championship season is over.  The teams will haul back to their shops, relax just a little bit, then resume preparations for 2023.

For the manufacturers in the new GTP class, the work is far from done.  Heck, they won’t even be leaving.  A three-day manufacturer test is scheduled to begin Monday morning at the track.  Frontstretch will be there to get a look at the new GTP cars on track and talk to some of the luminaries on site.