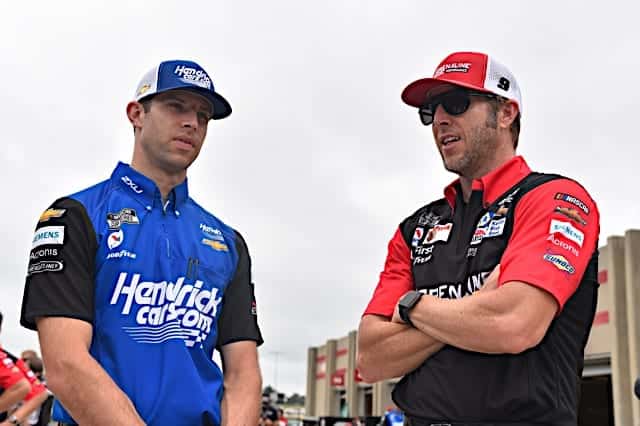 Welcome to this week’s Monday Morning Pit Box! It’s a new Frontstretch column where we look at the race through the eyes of a NASCAR crew chief, going in-depth on crucial calls from Sunday’s (Oct. 2) YellaWood 500 at Talladega Superspeedway that altered the outcome of the race.

This week, we were at the biggest, baddest, fastest, most dangerous track on the circuit. Race five of the 10-race Cup Series playoffs did not disappoint, providing plenty of action in the form of a season-high 57 lead changes. It was a race full of pit strategy, manufacturer allegiances and tandem drafting, ending with a battle between best friends Chase Elliott and Ryan Blaney.

In the end, Elliott prevailed, claiming his series-high fifth victory of 2022. It was a clean race where a playoff-high 33 cars finished, 27 of them on the lead lap. That meant calls on pit lane were crucial in order to maintain track position within a draft where three-abreast was more of a rarity than usual here, making it more difficult to move through the pack.

Let’s take a closer look at some calls that defined the race.

We start things off on lap 27, when the second caution of the race flew for Harrison Burton’s crash, collecting about a half-dozen cars in the day’s only major incident.

Much of the field came to pit lane under the yellow. While most drivers took at least two tires, championship contender Chase Elliott opted for fuel only under the direction of crew chief Alan Gustafson. Kyle Busch‘s crew chief, Ben Beshore, also chose not to change tires in favor of gaining additional track position.

The strategy to take fuel only paid dividends for Elliott and Busch; both led laps and finished stage one inside the top 10. Elliott took third, adding valuable points, while Busch wound up in seventh place. Most importantly, the duo set the stage for more fuel-only calls as the race went on; they proved you could do it without the type of tire failures that plagued long green-flag runs last weekend at Texas Motor Speedway.

Let’s flash forward to lap 100. There’s 20 to go in stage two and the Joe Gibbs Racing Toyotas begin slowing in order to pit under green. However, polesitter Christopher Bell lost control of his car and spun near the entry of pit road. This mistake all but assured he lost the draft, triggering an additional speeding penalty after sliding through the timing lines sideways without fully stopping.

Crew chief Adam Stevens did not panic, however. Stevens chose a four-tire stop to alleviate a flat-spotting issue, spending the extra time despite knowing it would put Bell and the No. 20 Toyota a lap down. He predicted correctly checking over the car was worth it, knowing the way the race was unfolding meant Bell would almost certainly get the free pass, earning his way back on the lead lap at the end of stage two.

That’s exactly what happened although, in the end, Bell could never quite be a contender up front. He finished just 17th, failed to score any stage points and sits in a near must-win situation heading to the Charlotte Motor Speedway ROVAL this weekend. But Stevens gave his driver a chance, making the right call when a different approach could have left them limping home the rest of the race with further damage.

With only six cautions, there were limited opportunities for crew chiefs to make a difference on pit road (there’s only so many adjustments you can make at Talladega, anyway; the rules keep the field superglued together in the draft). So, it turns out the biggest decision happened with the help of spotters and teams working together on the racetrack.

After the final yellow for Daniel Hemric stopping on pit road, the field faced a restart with just two laps remaining. Erik Jones and his No. 43 Chevrolet remained in contention to win the race, similar to the position they’d been in at Talladega back in the spring. He started on the outside of the front row, receiving help from fellow Chevy driver Ross Chastain behind him while the Fords of Ryan Blaney and Michael McDowell superglued themselves together on the inside.

However, as the penultimate lap unfolded, Jones and Chastain disconnected from each other on the backstretch. Falling behind, there was an opening for Chase Elliott to slide ahead of both of them and begin leading the outside line himself.

Jones was faced with a decision; crowd his way to the inside, which had the momentum at the time, or commit to pushing the No. 9 around the track. That’s exactly what Jones chose to do, aligning himself with his Chevy teammate for a full lap. In doing so, Jones gave up an opportunity to win himself, committed to running second as Elliott fought hard with Blaney on the inside of him, leaving no room for the No. 43 to squeeze through.

In the end, Jones’ push left Elliott in front of Blaney. Jones would run sixth while Chastain wound up fourth, McDowell third and Blaney runner-up after losing to Elliott by just .046 seconds at the line.

“They’ve always been a great Chevrolet teammate,” Elliott said about Jones and the No. 43 team after the race. “I’ve raced with Erik for a long time. I think that mutual respect for one another is there, and to me, that’s what it’s about. When you respect your peer, respect another driver, you tend to race with that type of respect on each side. That, to me, is the big one, those relationships and that earned respect is what goes a long way, and Erik certainly showed a lot of that to me. Obviously, he was going to try to win the race too, he just came unconnected off [turn] 4 and it didn’t work out. But fortunately, it did for us, and we’re certainly going to enjoy it.”

Next week, the 12 remaining NASCAR playoff contenders will be cut to eight after racing at the Charlotte ROVAL. Which crew chiefs will be able to survive the chaos of the season’s final road course, and which will become the ROVAL’s next victims as the NASCAR Playoffs surge onward?

You’ll have to tune in to find out. The race will be broadcast on Sunday, Oct. 9 on NBC Sports with radio coverage provided by SIRIUS XM Channel 90 and the PRN family of networks.

The tires the teams used were the Fred Flintstone model from the Bedrock Concrete Tire factory. No one can complain about the tires not lasting. Reminds me of the Firestone ads singing the praises for the tires that last 500 miles at Indy and don’t need replacing.

Those Goodrock tires didn’t work out too good for Goggles Paisano if I recall my Flinstones history. He was known for “driving like someone coming home from work on the freeway”.