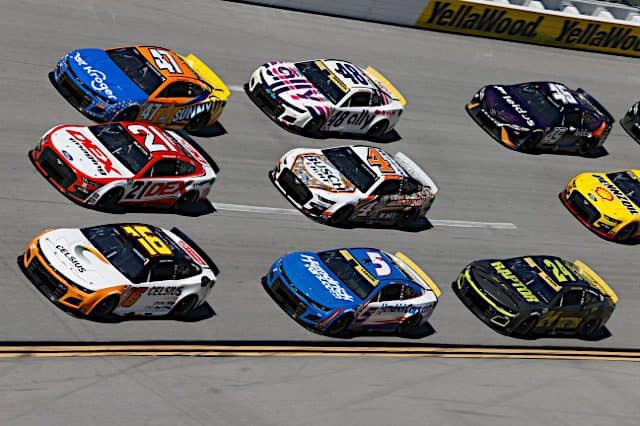 TALLADEGA, Ala. – In the minutes following the checkered flag to end Sunday’s YellaWood 500 at Talladega Superspeedway, one visual sight associated with restrictor-plate racing was absent. With just one multi-car incident on Sunday, and that one only resulting in two cars seeing their day end in Ty Gibbs and Harrison Burton, there was no line of wrecked and mangled machines and candidates for race-used sheet metal auctions from crumpled cars.

Count race-winning crew chief Alan Gustafson from Chase Elliott‘s No. 9 car as one of those likely glad for fewer wrecked racecars.

“It was certainly a bit tamer than I expected,” Gustafson said. “I kind of expected maybe not the typical four-wide craziness. The cars don’t seem to generate the performance, the huge runs. It’s more about that steady see-saw momentum.”

But racecars weren’t the only things that avoided taking a big hit on Sunday.

Due to no big wreck, no drivers in the NASCAR Cup Series playoffs left the gargantuan, eastern Alabama track having taken a massive points hit due to a major accident. Other than Joey Logano‘s 27th-place finish, no playoff driver finished outside the top 20.

Heading into next week’s race at the ROVAL, Chase Briscoe and Austin Cindric are tied for eighth, 12 points shy of Daniel Suarez. Nine points behind them is William Byron, with Christopher Bell 33 points below the cutline and Alex Bowman, who sat out Talladega due to concussion-like symptoms, 54 back but with a playoff waiver.

Barely above that threshold was Kyle Larson, who picked up points in the first two stages, even finishing third in the second stage.

“It could’ve been worse, it was good that we had a good second stage and got a lot of points,” said Larson, who picked up points in two stages on Sunday and took third in the second stage. “One wrong-lane decision there at the end kind of cost us the race. It was one car short of being able to move that second lane and get down in front of whoever was leading. I just got stuck in that lane and it [went] longer and longer as cars were moving.”

Still, Larson was grateful to be running at the finish.

“Anytime that I can leave here and not be crashed, it’s good,” Larson said.

While Elliott celebrated in victory lane, another Hendrick Motorsports who calls Papa Joe Hendrick Boulevard home languished to a 12th-place finish, battling engine temperature issues all day. But, like others, his day could have been worse — his engine issues, while detrimental, weren’t enough to force Byron to end the race early.

“We just couldn’t really go anywhere all day, our engine temps were always pretty high,” Byron said. “When I was second in line behind the [No.] 17, my temps just got too high. I don’t know what I need to do differently there. We just struggled to get to the front.

“When we got up there, we just couldn’t maintain. We got boxed in there toward the end. It’s unfortunate because coming in, I felt like we’d have a good opportunity and just could never get the track position to stay up toward the front.”

Byron, now nine points below the cutline going into the ROVAL, was in need of a strong run following the points penalty from last week at Texas, one that car owner Rick Hendrick is still puzzled by.

“I’ve seen other cars under caution hit each other,” Hendrick said. “In that situation, [Byron] wasn’t trying to spin [Denny Hamlin], but they got a tower full of people, they could have put him in the back, could have done something right then rather than wait till Monday or Tuesday, then make a decision. That’s like saying you’re going to tell everybody who won the race next week. That’s a little strange. I think it was excessive. We’ll just see what happens.”

And then there was Sunday polesitter Bell, who as a result of a 17th-place finish remains below the cutline. It essentially places him in a win-or-go-home situation at the Charlotte ROVAL.

“Just a terrible, terrible race overall for me,” Bell said. “We came in here knowing we had to maximize points and, unfortunately, we didn’t get to do that. I feel a lot better about the ROVAL than I do about Talladega. I don’t think we’ll be able to get in on points, so I’ll have to go there and win the race.”

On the upper end of Sunday’s results, however, were Ryan Blaney in a close second, Ross Chastain in fourth, Hamlin in fifth, Suarez in eighth, Cindric in ninth and Briscoe in tenth.

“Overall, it certainly puts us in a good spot to race for a spot in the Round of 8,” Cindric said.

They did just enough to race but no one took any unnecessary risks. Looked like it was planned. Makes sense, the points are not shaken. I have a feeling we will see more of this for the remainder of the year. And the sport can’t force them to take those unnecessary risks. As long as they stay together. It saved the owners a ton of money, who more than likely aren’t upset with that, either.
Kind of like quiet quitting or a case of the “blue flu,” you can slow down and not make it public. And the first one who breaks out and tries to take advantage of it, someone could “drop a brick” on their head. It appears they are together. My opinion.