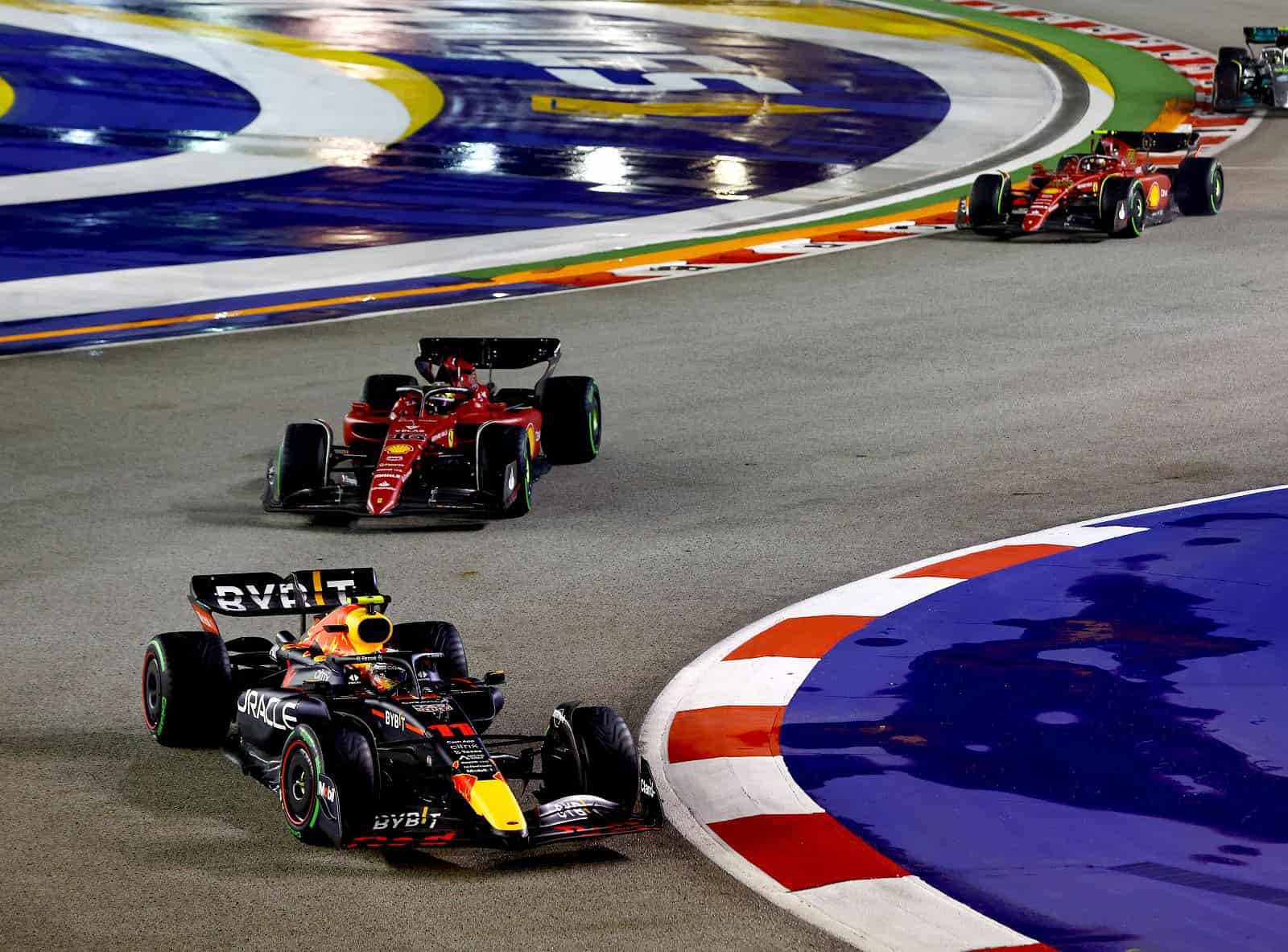 In a race that had six retirements in the 20-car field, Sergio Perez was able to hang onto the lead after taking it on lap one all the way to the checkered flag.

“It was my best performance, I controlled the race,” Perez said in the post-race podium interview to F1 Media. “Although the [track] warm-up was pretty difficult, the last few laps were so intense. I didn’t feel it that much in the car, but when I got out of it, I felt it. I pushed, I gave everything for the win today.”

It’s the fourth career win for the Mexican driver and came on a night that his teammate Max Verstappen could have clinched the championship. Instead, however, everything and the kitchen sink was thrown at the Dutchman.

Verstappen stalled out at the start and fell all the way to 13th on the opening lap after starting eighth. He climbed his way up to 10th by the end of the second lap and kept marching through the field during the race until flat spotting his tires and having to pit on lap 40. Verstappen charged once again and finished seventh, leaving the championship up for grabs for at least one more race.

Charles Leclerc finished second and Carlos Sainz took the final step on the podium in third. The McLaren duo of Lando Norris and Daniel Ricciardo had an excellent points day; with both Alpines not finishing the race, Norris’ fourth and Ricciardo’s fifth places destroyed the 18-point gap the French automaker had built on McLaren for fourth in the constructor championship.

Thanks to attrition, the Aston Martins of Lance Stroll and Sebastian Vettel had great days as well, finishing sixth and eighth respectively. Pierre Gasly ended the day in 10th, getting the final point.

The start of the grand prix was delayed an hour due to heavy rainfall. The first half of the race was ran under wet conditions, with every driver on intermediates. The FIA’s two-hour limit expired on lap 58, calling the race three hours early.

On lap seven, Nicholas Latifi swerved into the wall and collected Zhou Guanyu in turn five. Zhou stalled out in the run-off area, and removing his Alfa Romeo necessitated a full-course safety car. Latifi made it back to pit road, albeit slowly with a puncture, but retired his Williams.

In his return race from appendicitis, Alex Albon ran out of grip in turn eight and drove into the wall on lap 26. Albon was able to make it back to pit road with a puncture and no front wing, but retired from the race. The virtual safety car came out once again prior to going back to green flag conditions. A couple of laps later, Esteban Ocon also blew his engine to go along with his teammate Alonso and stalled out in turn 13, causing yet another virtual safety car.

The next driver to have issues was Lewis Hamilton, who drove into the barriers in turn seven on lap 33. Hamilton was able to quickly rejoin the race and there was no safety car, but he had a damaged front wing and had to pit. Although Hamilton lost gobs of time and his fourth-place position to Norris, this was around the time most teams were finally starting to switch from intermediate tires to dry tires, so it was not the end of the day for the seven-time champion. He was at least able to finish ninth.

On lap 36, Yuki Tsunoda drove into the barriers in turn 10, and his AlphaTauri couldn’t refire, bringing out the full safety car due to needing to repair damage to the wall. All cars on track had pitted at that point except for the two McLarens, who pitted right when the safety car came out and took advantage of a faster pit stop.

Red Bull has all but locked up both the drivers and the constructors championships this year, with Verstappen still hanging on to a 104 point cushion over Leclerc and Red Bull having built up a 137 point gap on Ferrari. Down the grid in constructors, there was a lot of movement due to both McLaren and Aston Martin having standout days; McLaren now holds a four point lead over Alpine for fourth in constructors, while Aston Martin has jumped from ninth to seventh as Haas and AlphaTauri tie for eighth (with Haas holding the tiebreaker).

The next race on the F1 calendar will be the first Japanese Grand Prix since 2019 on Sunday, October 9th. Verstappen can clinch the championship on the Suzuka Circuit if he were to win the race and Leclerc finishes anywhere except for second. Coverage of the race will be provided by Sky Sports through ESPN, and lights-out will be broadcast live at 1 a.m. EST.

As of press time, Perez was under investigation for a safety car violation during the lap 36 safety car period. This article will be updated after a decision has been made. However, it should be mentioned that Perez finished over seven seconds ahead of Leclerc and would be able to survive a five-second penalty.